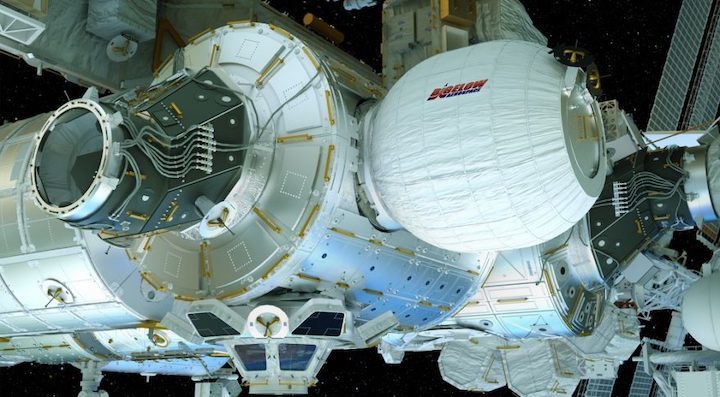 ATLANTA — An experimental module added to the International Space Station three years ago to test expandable module technologies has been cleared to remain on the station through the late 2020s.

In a July 30 presentation at the ISS Research and Development Conference here, Nathan Wells, an instrumentation lead for the Bigelow Expandable Activity Module (BEAM) at NASA, said the module’s on-orbit performance had exceeded expectations and that it had been cleared to remain on the station to 2028.

“Now it’s become more of a core facility,” he said of BEAM, which is now being used for stowage to free up volume on the cramped station.

BEAM launched in April 2016 on a cargo resupply mission and was installed on the station in May of that year. NASA originally intended to keep the module on the station for two years to test the effectiveness of BEAM’s expandable module technology, then discard it.

In October 2017, though, the agency said that it was extending its agreement with Bigelow Aerospace, who developed the module, to keep the module on the station for at least five more years to conduct additional tests of the module as well as use it to store cargo. “BEAM continues to demonstrate positive performance in space and initial studies have shown that it can be used long-term on the ISS to support the government’s needs for on-orbit stowage and for technology demonstrations,” NASA said in a procurement filing announcing the contract for the extended mission.

Although the contract doesn’t extend through 2028, Wells said than an engineering assessment has cleared it to remain there that long. “Overall, it’s been meeting all of our expectations and beyond that.”

NASA continues to monitor conditions inside the module, like temperature and radiation, that was part of the original purpose of flying BEAM. Wells noted there had been no noticeable difference in the thermal performance of the module, whose temperatures remain “more benign” than originally predicted, even with the module loaded with about 1,440 kilograms of cargo.

BEAM is also outfitted with sensors to detect impacts from micrometeoroids or orbital debris. One such event was detected in February 2017 that the sensors localized to the zenith section of the module, but was not strong enough to penetrate to an internal “restraint” layer.

Wells and other NASA officials said their certification of BEAM’s ability to safely remain on the station only goes through 2028. While there have been discussions about extending the station’s life beyond that, including legislation that would authorize an extension through 2030, they said had not done the analysis to determine what were the limiting factors in the lifetime of the module.

The module has demonstrated the performance of expandable, or inflatable, modules in orbit, something that Bigelow Aerospace and others are pursuing for other applications. Bigelow is among the companies interested in developing a commercial module for the ISS using that technology, as well as commercial space stations, using a module called the B330.

Bigelow Aerospace also was a participant of a NASA program, part of its Next Space Technologies for Exploration Partnerships effort, to develop habitation module technologies for use on the agency’s lunar Gateway. However, NASA announced July 19 that it planned to award a sole-source contract for the Gateway’s hab module to Northrop Grumman after concluding the company was the only one who could develop the module in time to support NASA’s goal of a human lunar landing in 2024.

That decision prompted a July 25 statement from Bigelow acknowledging the decision but also looking ahead to future opportunities. “We think the B330 standalone space station would make an excellent low altitude lunar depot,” Robert Bigelow, president and founder of Bigelow Aerospace, said in the statement. “Someday if NASA were to give us the green light, we would be very excited to be part of the Gateway program, a future low-level lunar depot program or to even land a lunar base on the moon.”