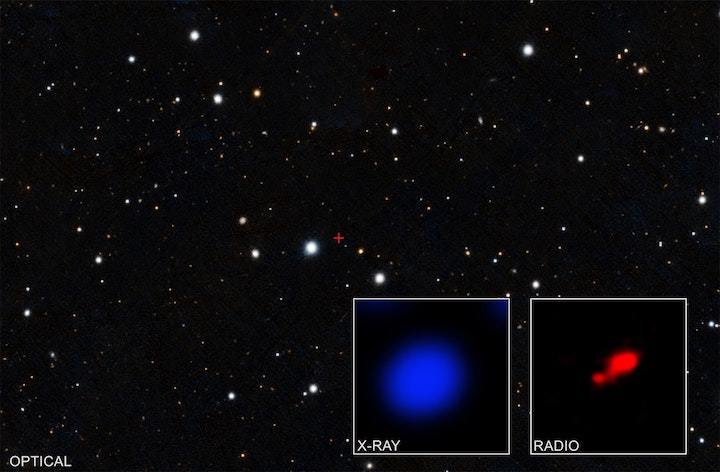 Astronomers have discovered evidence for the farthest “cloaked” black hole found to date.

At only about 7% of the current age of the universe, it is, they say, the first indication of a black hole hidden by gas at such an early time in the history of the cosmos.

If confirmed, it beats the previous record for an obscured quasar by approximately half a billion years.

According to current theories, a dense cloud of gas feeds material into the disk surrounding a supermassive black hole during its period of early growth, and this “cloaks” or hides much of the quasar’s bright light from our view.

As the black hole consumes material and becomes more massive, the gas in the cloud is depleted, until the black hole and its bright disk are uncovered.

“It’s extraordinarily challenging to find quasars in this cloaked phase because so much of their radiation is absorbed and cannot be detected by current instruments,” says Fabio Vito, who led the study.

The key to success was NASA’s Chandra X-ray Observatory and the ability of its X-rays to pierce through the obscuring cloud.

The new finding came from observations of a quasar called PSO 167-13, which was first discovered by Pan-STARRS, an optical-light telescope in Hawaii.

Optical observations from these and other surveys have detected about 200 quasars already shining brightly when the universe was less than a billion years old, or about 7% of its present age.

These surveys were only considered effective at finding unobscured black holes because the radiation they detect is suppressed by even thin clouds of gas and dust. Since PSO 167-13 was part of those observations, this quasar was expected to be unobscured, too.

Vito’s team tested this idea by using Chandra to observe PSO 167-13 and nine other quasars discovered with optical surveys. After 16 hours of observation, only three X-ray light photons were detected from PSO 167-13, all with relatively high energies.

Since low-energy X-rays are more easily absorbed than higher energy ones, the likely explanation is that the quasar is highly obscured by gas, allowing only high-energy X-rays to be detected.

“This was a complete surprise,” says co-author Niel Brandt of Penn State University. “It was like we were expecting a moth but saw a cocoon instead. None of the other nine quasars we observed were cloaked, which is what we anticipated.”

An interesting twist, the researchers say, is that the galaxy hosting for PSO 167-13 has a close companion galaxy.

Because of their close separation and the faintness of the X-ray source, they were unable to determine whether the newly discovered X-ray emission is associated with PSO 167-13 or with the companion galaxy.

If the X-rays come from the known quasar, then astronomers need to develop an explanation for why it appeared highly obscured in X-rays but not in optical light. One possibility is that there has been a large and rapid increase in cloaking of the quasar during the three years between when the optical and the X-ray observations were made.

On the other hand, if instead the X-rays arise from the companion galaxy, then it represents the detection of a new quasar in close proximity to PSO 167-13. This quasar pair would be the most distant yet detected.

In either of these two cases, the quasar detected by Chandra would be the most distant cloaked one yet seen, at 850 million years after the Big Bang.

The findings of the study will be published in the journal. Astronomy and Astrophysics. The paper is available now on the preprint server arXiv.