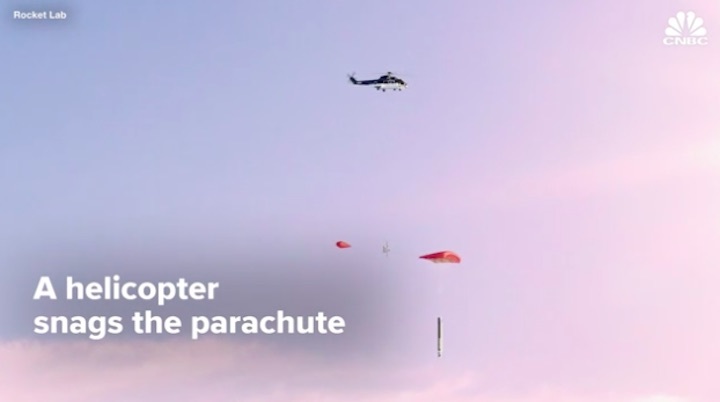 ocket Lab, the leading U.S. company in launching small rockets, is aiming to take a major step in the year ahead: Recovering and re-using the largest part of its Electron rocket.

If Rocket Lab’s plan succeeds, it would become only the second private company to return an orbital-class rocket booster to land – only SpaceX has previously pulled off the feat.

The booster is the large, bottom portion of the rocket. The key advantage in re-use for Rocket Lab is launching more frequently, CEO Peter Beck told CNBC in an exclusive interview, as the company will be able to add previously flown rockets to its line-up of rockets coming off the assembly line.

“Even if we recover a booster stage once and reuse it once, we’ve doubled our production rate, essentially,” Beck said.

SpaceX uses the engines on its rockets to slow down and control their descent, and Beck said Rocket Lab had to develop a different technology to make re-use feasible. A secret landing development team at Rocket Lab did take a “deep dive into propulsive landings,” Beck said, but in the end decided against it.

It’s “just not feasible, because then a small launch vehicle becomes a large vehicle,” he explained.

Beck called the technology an “aero thermal decelerator” – essentially using the atmosphere to slow down the rocket.

He declined to go into details, as the exact process is proprietary, but he explained that the most difficult part of the process is what his team calls “re-entering through the wall,” as the booster has to survive extreme heat and pressures as it comes back.

Here’s how Rocket Lab plans to pull it off.

Rocket Lab’s helicopter takes off from the company’s boat

The most difficult part: Re-entering the atmosphere at 8½ times the speed of sound

The booster releases a parachute and begins gliding

A helicopter snags the parachute

One of the advantages Beck touted in the company’s development of this reusable technology is the data Rocket Lab has been gathering already.

“Ever since we really started flying commercially – the vehicle’s heavily instrumented – we have something like 15,000 channels of data on every flight,” Beck said.

While the midair helicopter recovery may seem like the most crazy and difficult part, it’s not what worries Beck. Coming back into the atmosphere is the trickiest section, he said, because of the intensity of reentry.

Citing the company’s data, Beck estimates that Rocket Lab has to convert enough energy to power the equivalent of 57,000 homes, while the booster also withstands heat half the temperature of the Sun and forces that are like three elephants standing on the rocket. But if the company can pull that off, it may open an opportunity to launch, land and launch again more quickly than those in the space industry used to believe was possible.

“If we could capture that stage and bring it back to the launch site, in theory at least, we could recharge the batteries and go fly again,” Beck said. “All the engines and turbo pumps and relevant technology is basically designed with a near infinite reuse.”

Rocket Lab is preparing for its eighth total launch and Beck said that the tenth flight will see the company “rolling out some serious upgrades” to its Electron rocket. However, he declined to give his expected timeline for how long until the company’s first full recovery of a rocket booster.

“Until we get something through the wall it’s really hard to say,” Beck added.

Although some of the $140 million Rocket Lab raised last yearwas earmarked for this project, Beck wasn’t sure how much has been used in total to develop this technology.

“None of this is crazy capital intensive,” Beck said.

Rocket Lab does not have any plans to raise more capital, and Beck emphasized that the company’s business was performing better than expected.

Asked about plans for an initial public offering (IPO), Beck said that “at some point there will be a liquidity event” but that he’s not sure yet in what way, and that he believes the company’s investors are patient.

“I feel like I’m about a quarter of the way done. Nobody’s in any hurry,” Beck added.

Rocket Lab is producing a rocket at a rate of about one in every 20 days, while it launches about once a month. Beck said the company’s factory is looking to get to about one rocket every other week by the end of the year. The company’s Electron rocket is priced at about $6.5 million to $7 million per launch and sends spacecraft about the size of a refrigerator into orbit.

While SpaceX is the most widely-known rocket company in the industry, Rocket Lab is steadily carving out its place by launching small batches of satellites to specific orbits around the Earth. The company prefers not to be compared to SpaceX, although Beck did note its similar wide-eyed ambition for what’s possible in rocketry.

“The common theme there is you’ve got two commercial companies with a bunch of really, really smart engineers trying to pull things off that aren’t very sensible,” Beck said.

SpaceX on Monday announced it was launching its own “Smallsat Rideshare Program.” In launching satellites, a rideshare refers to multiple spacecraft launching on the same rocket to similar or nearby orbits. Beck said there’s an important difference, as Rocket Lab’s customers don’t want rideshare and SpaceX is offering just “one flight a year to a very specific” orbit.

“We don’t see any impact on that whatsoever,” Beck said. “Our customers don’t want rideshare. If you think you have a dedicated launch vehicle and you’re doing a rideshare then you’re fooling yourself.”

The company has a balance of contracts for launches on its books, with half commercial customers and half government agencies, such as the U.S. Air Force.

“We need to stimulate the commercial guys as much as we try to supply the government side,” Beck said.

In fulfilling the government demand for launches, Rocket Lab is closing in on completing its second launchpad, off the coast of Virginia.

“That pad will be activated by the end of the year,” Beck said.