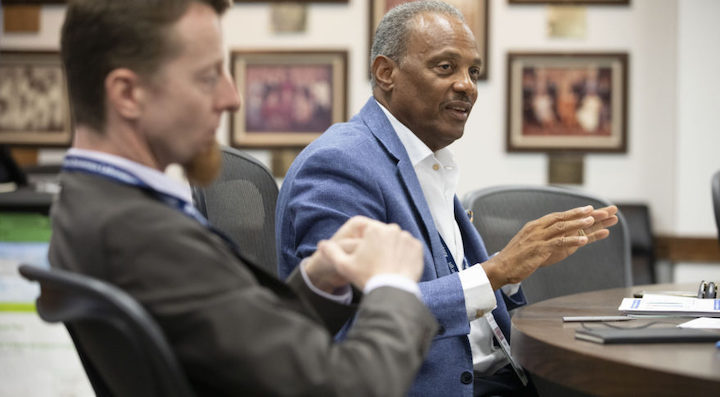 Arianespace announced it will perform a dedicated rideshare mission directly to geostationary orbit in the first half of 2022 on an Ariane 64. That mission, called GO-1, will be able to place 4,500 kilograms of payload into GEO about six hours after launch from French Guiana.

The direct injection will allow the GO-1 mission to drop off its payloads into GEO about six hours after launch. That is much faster than traditional launches that place satellites into geostationary transfer orbit, from which satellites spend anywhere from a few weeks to six months raising their orbit to GEO.

“This is clearly one of the great advantages of that solution,” said Wiener Kernisan, president of Arianespace’s U.S. subsidiary, during a briefing at the Conference on Small Satellites. “They’re able to have a satellite in orbit in six hours instead of six months.”

Kernisan said the company sees the demand for GO-1 coming from the emerging small GEO satellite field, where a number of companies are developing satellites weighing several hundred kilograms, rather than the several thousand kilograms of conventional GEO communications satellites. Such small GEO satellites can provide niche services for satellite operators as well as governments.

“There is a market out there,” he said, adding that Arianespace is in talks with three or four potential customers, with the first deals signed in perhaps three to six months. The company is streamlining the contracting process to allow customers to sign up for GO-1 as soon as six to 12 months before launch.

Kernisan said he expects GO-1 to be followed by similar missions, perhaps annually, based on the demand they’re seeing. “We see this as a growing trend,” he said, citing the overall growth of the smallsat industry. “Clearly there is a need for this type of service.”

SpaceX hops on board

At the same time Arianespace announced GO-1, SpaceX announced it was starting its own dedicated rideshare program to launch spacecraft to sun-synchronous orbit (SSO). SpaceX said it will carry out a series of Falcon 9 launches from Vandenberg Air Force Base in California, starting in late 2020 or early 2021 and continuing on an annual basis through at least 2023.

“SpaceX is committed to serving the commercial market as it grows and changes, and we believe we can address the needs of small satellite operators by offering reliable, cost-effective access to orbit through regularly scheduled, dedicated rideshare missions,” a company spokesperson said.

While Arianespace didn’t reveal pricing for its GO-1 mission, SpaceX included a price list with its announcement. A satellite weighing up to 150 kilograms can launch for $2.25 million if the customer signs up at least 12 months before launch, or $3 million if the customer signs up as soon as six months before launch. A 300-kilogram satellite can launch for $4.5 million to $6 million.

SpaceX performed one dedicated rideshare mission with Spaceflight in December, launching 64 satellites to SSO on a Falcon 9. SpaceX is working directly with satellite operators on this program, however.

SpaceX, which effectively exited the smallsat market with the retirement of the Falcon 1, has previously suggested that it could serve smallsat customers through dedicated rideshare missions. SpaceX President Gwynne Shotwell said at the World Satellite Business Week conference in Paris in September 2018 that the company was considering a regular series of dedicated rideshare missions. “Basically the train leaves the station at a specific time,” she said. “That could provide a pretty significant advantage to these microsatellites.”