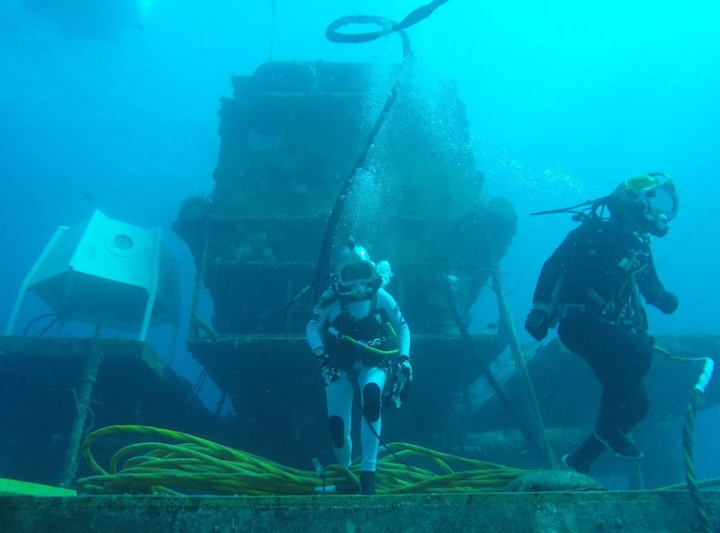 Another NEEMO expedition is set to begin this week, with the 10-day NASA Extreme Environment Mission Operations (NEEMO) 23 crew preparing to test techniques that will be employed during deep space missions. Previous NEEMO expeditions have already provided valuable lessons in dealing with challenges such as communication time-delays associated with sending and receiving commands between controllers on Earth and astronauts on Mars.

The NASA Extreme Environment Mission Operations (NEEMO) objectives are a highly advanced – and a more involved – version of the underwater training environment provided by the likes of the giant Neutral Buoyancy Laboratory (NBL).

The crews live and work from 63 feet below the Atlantic Ocean’s surface on the Aquarius Reef Base undersea research habitat – located off the coast of Key Largo, Florida.

NEEMO’s future was in doubt due to ownership issues of the facility, but it is now under the stewardship of Florida International University (FIU) which paved the way for new NEEMO missions.

The NEEMO expeditions have been evolving their objectives to match the long-term goals of sending astronauts to what was previously NASA’s roadmap of missions to Near Earth Asteroids (NEA) and missions to Mars.

A large focus over earlier NEEMO missions placed emphasis on conducting EVAs on the surface of an asteroid.

One such objective included the evaluation of different anchoring methods and how to connect the multiple anchors to form pathways. The aquanauts and engineers evaluated different strategies for deploying instruments and moving along a surface without gravity, mirroring conceptual graphics of an astronaut working up close and personal with a NEA.

Adding to the realism, the mission included the use of DeepWorker submersibles, acting as an underwater stand-in for the Multi Mission Space Exploration Vehicle (MMSEV), which was the leading concept to be the main NEA exploration vehicle at the site at the asteroid, utilizing its robotic arms and crew airlock, but now will be used on the surface of the Moon and Mars as a wheeled vehicle.

As with NASA’s realigned plans no longer including asteroid missions, the focus has switched to techniques that will be required on the Moon and Mars.

Aquarius acts as the Deep Space Hab (DSH) for these missions.

NEEMO 23 will focus on both exploration spacewalks and objectives related to space missions such as the International Space Station and future deep space missions to the Moon and Mars. As an analogue for future planetary science concepts and strategies, marine science also will be performed under the guidance of Florida International University’s marine science department.

ESA astronaut Samantha Cristoforetti will command the NEEMO 23 mission aboard the Aquarius laboratory. Cristoforetti was part of space station Expeditions 42 and 43 from Nov. 2014 to June 2015, where she spent 200 days living and working in the extreme environment of space, currently the longest spaceflight of a European. 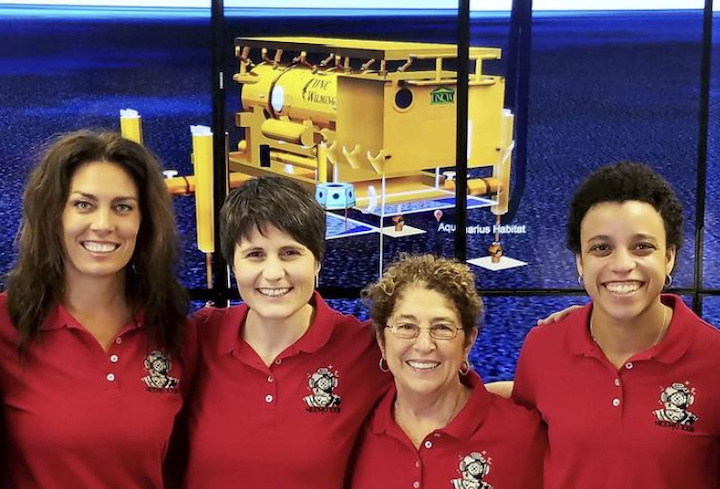 “The close parallels of inner and outer space exploration will be clearly demonstrated during this undersea mission,” NEEMO Project Lead Bill Todd said. “The daily seafloor traverses, or extravehicular activities in space jargon, are jam packed with technology and operations concept testing, as well as complex marine science. In the interior of Aquarius, aquanauts and astronauts will tackle an array of experiments and human research related to long duration space travel.” 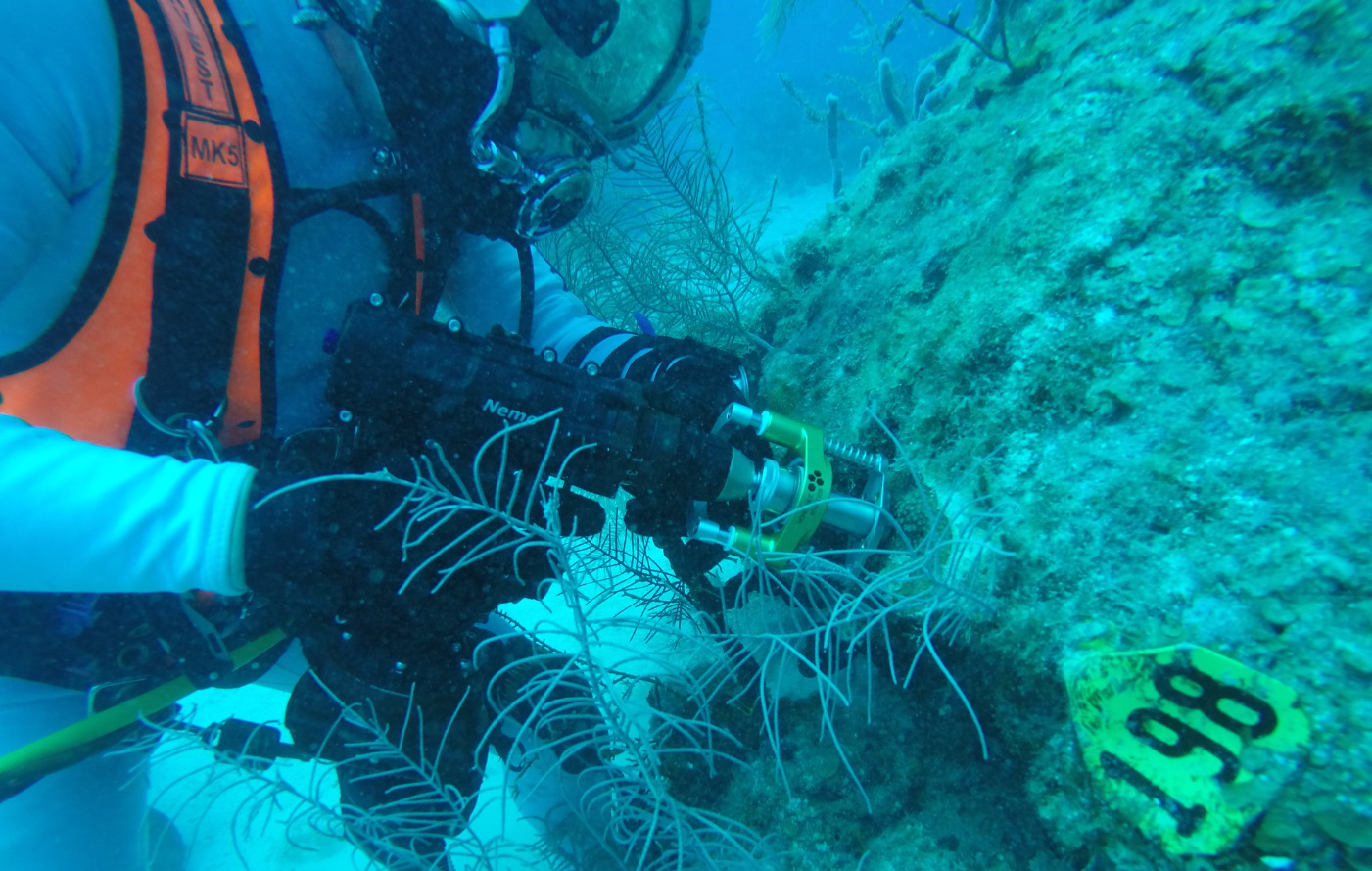 Objectives for the crew include evaluating scenarios for using science instruments and tools on the lunar surface, such as tools and hardware for getting science core samples; using augmented reality to guide an untrained operator from module to module by autonomously recognizing where it is; and studies of body composition and sleep.

It is expected that new technology will be further tested on this mission, following on from NEEMO 19 that first included wearable computers and smart apps, which are likely to play a large role in future deep space missions.

Use of these apps will add to the realism of a deep space mission at an asteroid and Mars, with NASA’s Mission Operations Directorate (MOD) previously involved, treating actual EVAs (or Waterwalks) during NEEMO as if they are in deep space by utilizing communication delays and protocols.

The MOD has been based in a mobile Mission Control Center (MCC) on previous NEEMO missions.

SAMANTHA DIVES BACK INTO OPERATIONS 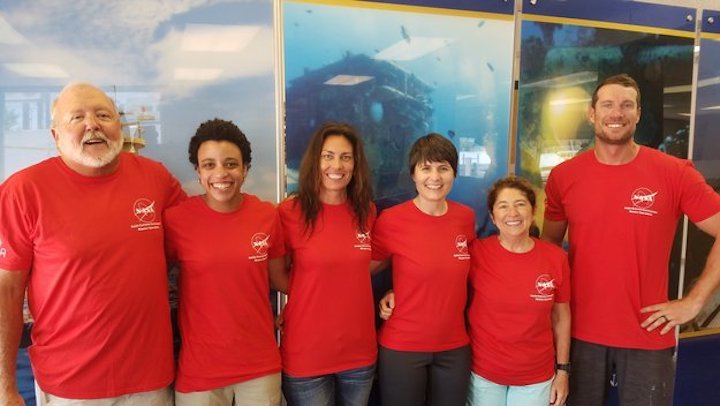 
ESA astronaut Samantha Cristoforetti will swap her spacesuit for dive gear this month as commander of a 10-day international research and exploration mission to the Atlantic Ocean floor.

During the NASA Extreme Environment Mission Operations (NEEMO) 23 expedition, Samantha will lead a team of four aquanauts as they live and work in the world’s only undersea research station, Aquarius. Located almost 19 m below the surface of the ocean, near Key Largo Florida, USA, Aquarius is an ideal environment to test concepts for future missions to the Moon and Mars, simulate spacewalks and carry out marine science under the guidance of Florida International University’s marine science department.

The aquanauts will be in saturation for the duration of the mission and will perform daily four-hour excursions on the sea floor wearing diving helmets.

Four years on from her first six-month mission to the International Space Station, known as Futura, Samantha is motivated by the challenge of an underwater world.

“It doesn’t happen every day that you get to live 10 days underwater where you have this incredibly rich marine flora and fauna,” Samantha explains. “NEEMO quite literally provides the opportunity to dive back into an operational environment.

“In many ways, Aquarius functions like the Space Station, with set procedures, roles and tight timelines. I’m really looking forward to experiencing that feeling again and learning from my crew mates who bring a wealth of experience in marine research.” In addition to Samantha, the NEEMO 23 crew comprises NASA astronaut candidate Jessica Watkins, world renowned marine researchers Shirley Pomponi and Csilla Ari D’Agostino, and two professional habitat technicians Mark Hulsbeck and Thomas Horn. They will be supported by an onshore team of NASA and ESA experts who will guide them through onboard operations and underwater spacewalks as they would on Station.