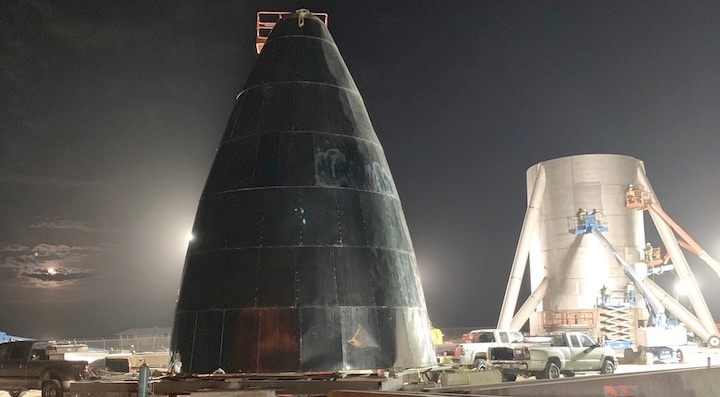 In a tweet early Dec. 24, Musk posted a photo of two parts of that initial test article, a conical section next to a cylindrical unit with landing legs. “Stainless Steel Starship,” he wrote. 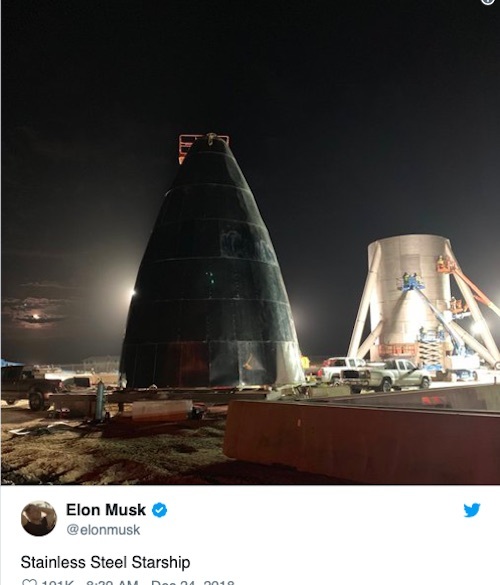 Starship is the new name, announced by Musk last month, of the upper or “spaceship” stage of the next-generation launch system previously officially known as Big Falcon Rocket, or BFR. The lower, booster stage is now called “Super Heavy.”

The company has been working on a Starship test article for low-altitude flight tests at the company’s South Texas launch site under development. That test article, dubbed a “hopper,” would have the same nine-meter diameter as the full-scale version of the vehicle, but would not be as tall.

The company filed an application with the Federal Communications Commission Nov. 19, seeking an experimental license to support communications with the hopper during upcoming flights. SpaceX said it planned a combination of low-altitude flights, going no higher than 500 meters, and high-altitude ones, going as high as 5,000 meters, from the Texas site. The company didn’t disclose a schedule for the flights in the application but said it expected to need the license for two years.

Musk and other company officials have said those hopper flights would begin in late 2019. However, Musk tweeted Dec. 22 that he expected those flights to begin as soon as early next year. “I will do a full technical presentation of Starship after the test vehicle we’re building in Texas flies, so hopefully March/April,” he wrote.

The recent series of tweets from Musk also confirmed a change in materials that will be used to build the vehicle. Original plans, dating back to designs presented in 2016 and 2017, called for the use of carbon composite materials, which are lightweight but have high strength. Earlier this month, though, Musk said SpaceX had shifted to a “fairly heavy metal” for use in the vehicle.

A stainless steel surface of the vehicle, he added, would require “much less” thermal protection but also would not be painted. “Skin will get too hot for paint,” he tweeted. “Stainless mirror finish. Maximum reflectivity.”

The test hopper will be powered by three of the company’s Raptor methane/liquid oxygen engines under developments. Those engines, which the company has been working on for several years with some financial support from the U.S. Air Force, has undergone design changes as well. “Radically redesigned Raptor ready to fire next month,” he tweeted, not elaborating on those changes.

He did note that SpaceX had developed a “superalloy” for Raptor, called SX500, designed to handle hot oxygen-rich gas at pressures of up to 12,000 pounds per square inch. “Almost any metal turns into a flare in those conditions,” he wrote, adding that the company’s foundry for producing that alloy is “almost fully operational.” That foundry “allows rapid iteration on Raptor.” 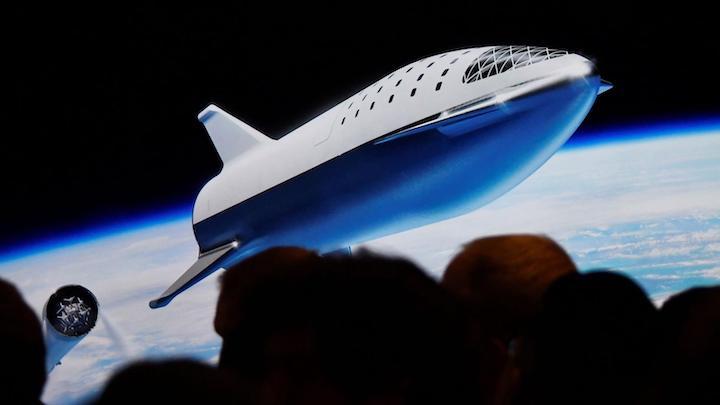 Elon Musk has a plan to get to Mars, but how he’s going to get there keeps changing.

Over the weekend, the SpaceX CEO said the company had “radically redesigned” its Raptor engine, casting a new steel alloy to contain the hellish engine temperatures during liftoff, and swapping out carbon-fiber components for ”mirror-finish” stainless steel.

Musk said SpaceX is switching to stainless steel components because their performance under extreme heat and stress beats out that of carbon-fiber. While carbon-fiber is better at room temperature, Musk stated the extreme heat and cold of space made steel superior despite the added weight.

SpaceX engineers are also finishing a “superalloy foundry” at the company’s Hawthorne, California headquarters for its methane-fueled rocket engine known as the Raptor. The metal components must endure hot gas blasting out of the nozzle at 12,000 psi (the same pressure that exists at the deepest part on the ocean). “I super ❤️ 300 Series Stainless!,” Musk tweeted about the hardened steel alloy.

Musk was visiting SpaceX’s South Texas test site to gauge progress on the massive two-stage reusable Starship rocket system that will power it to Mars. The system is the Starship passenger craft atop a massive booster engine know as the Super Heavy. It is designed to carry as many 100 people and tons of cargo to Mars.

An illustration of the Super Heavy booster and Starship craft.

For early tests, SpaceX had planned to use a modified second stage of its Falcon 9 rocket. But Musk tweeted on Dec. 22 that test craft will fly atop a full-size Super Heavy booster, and the prototype Starship itself will now be a slighter shorter version of the final design with the full body diameter of 9 meters (30 feet).

SpaceX is racing to build out its prototypes so it can fly to orbit by June 2019. It is expected to fly several test flights in April. These “hops,” or sub-orbital trips, will allow engineers to test the craft as it leaves Earth’s atmosphere and then endures the heat of re-entry, a critical trial for trips to the Red Planet.