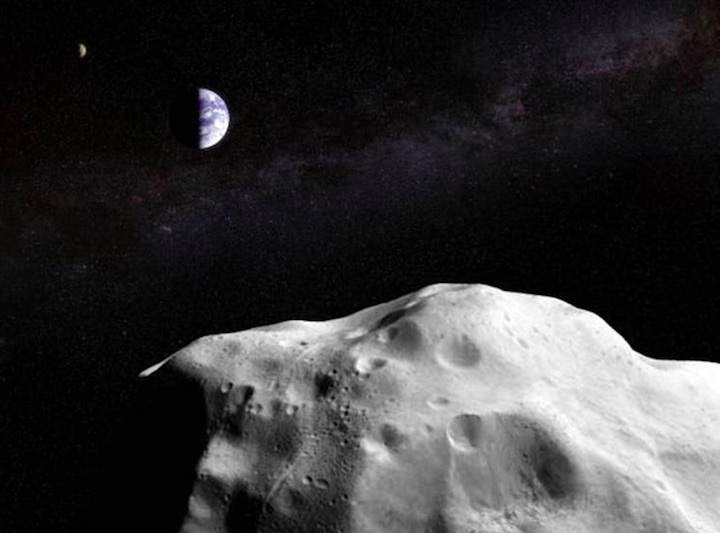 Just a few days ago, a small asteroid lit up the sky over Botswana – having been discovered mere hours before it hit the Earth. Near Earth Objects (NEOs) like asteroids were the focus of a four-week conference at the Munich Institute for Astro and Particle Physics (MIAPP) in Garching. Dr. Detlef Koschny, lecturer with the Chair of Astronautics at the Technical University of Munich (TUM), explains why we need to expand NEO research and detection capabilities.

Sixty-five million years ago, a 15-kilometer-sized asteroid wiped out two-thirds of all life on Earth, including the dinosaurs. But it’s probably not this kind of monster asteroid that we should be worried about. It’s actually the smaller Near Earth Objects (NEOs) that pose a greater imminent threat, like the asteroid that struck Earth on June 2 that scientists only saw coming a day in advance.

Internationally renowned astronomers, astrophysicists and space researchers gathered in Garching near Munich for the past four weeks to develop new strategies for the improved detection, scientific and commercial exploitation of and defense against NEOs. The conference was organized by the Munich Institute for Astro and Particle Physics (MIAPP), a subsidiary of the Cluster of Excellence “Origin and Structure of the Universe” at the Technical University of Munich (TUM).

Dr. Detlef Koschny, head of the Near Earth Objects team at the European Space Agency (ESA) and a lecturer with the TUM Chair for Astronautics, explains why scientists are increasing their research focus on smaller NEOs.

Let’s start with a basic question: How is an asteroid different from a meteorite?

Detlef Koschny: Asteroids are objects larger than one meter – for example the object that exploded over Botswana earlier this month. Meteoroids are objects smaller than one meter. If they enter and pass through a planet’s atmosphere, they are called meteorites. Comets are asteroids with large amounts of volatile compounds such as water ice. If they come close to the Sun, these compounds vaporize, creating their distinctive tails.

Hollywood disaster films like “Armageddon” always feature colossus asteroids on a direct collision course with Earth. So why should we be worried about smaller NEOs?

Detlef Koschny: NEOs that might potentially come close to or hit our planet range in size from a few millimeters to about 50 to 60 kilometers in diameter. We’ve detected the majority of the larger NEOs and computed their trajectories and the statistical risk for collision with Earth 100 years into the future.

We’ve mapped 90 percent of the asteroids that are a kilometer in size or larger. We know precisely where the big ones are and that they won’t pose a threat. In the ‘mid-size’ region, the situation is completely different: We have only detected and mapped less than one percent of NEOs smaller than a kilometer.

If a 100-meter asteroid hit Earth, it would cause significant damage in an area the size of Germany, and even affect the surrounding region. But asteroids of this size don’t strike Earth very often. Maybe every 10,000 years on average.

Going from 100 meters down to 50 meters, the statistical frequency of strikes increases to once every 1,000 years. Exactly a century ago in 1908, a 40-meter object struck the Earth over Tunguska, Siberia, destroying an area of forest the size of the Munich metro area.

And then if we go down to asteroid sizes around 20 meters – like the asteroid that exploded over Chelyabinsk in Russia in 2013, which ended up injuring 1,500 people – these occur on average once every 10 to 100 years. We will definitely see something like that again in our lifetime.

Nobody saw the Chelyabinsk asteroid coming before it hit. And scientists only spotted the one that hit Botswana a few hours in advance. What is the current state of NEO detection technology?

Detlef Koschny: Right now, there are two main survey programs running on Earth, both funded by our American colleagues. They utilize optical telescopes that cover a large field of view and can continually scan the night sky to detect any objects that are bright enough.

When it comes to detecting larger objects, this strategy works quite well, as these are visible even when they’re still far away from the Earth. But to detect smaller objects down to a size of 20 meters is very difficult. They are not bright enough to be detected until they are at least as close as the Moon.

If you only have two of these telescopes on the planet and it takes each telescope three weeks or so to cover the complete sky, you have to be really lucky that a small asteroid crosses your field of view just when you’re looking in the right direction.

That’s why we are currently developing extremely wide-field telescopes that will have the ability to scan the entire sky in just 48 hours. Additionally, within the ESA Space Situational Awareness (SSA) program, in which I work, we mobilize observatories and astronomers worldwide through the NEO Coordination Centre at the Agency's European Space Research Institute (ESRIN) facility in Italy.

So what are your recommendations for improving detection and tracking capabilities, and what new detection technologies are being deployed either currently or in the near future?

Detlef Koschny: There’s a system called Asteroid Terrestrial-impact Last Alert System (ATLAS) that just went online in the U.S. It consists of small telescopes which, while they don’t see very faint objects, cover almost the complete night sky once per night. Here in Europe, we are building the Flyeye telescope, with a one-meter effective aperture. It provides us with a big field of view that is more than 100 times the size of the full Moon in the night sky. In one night, with one telescope, we can cover about half the sky. The strategy to achieve this was developed by one of our master’s students here at TUM.

Our conclusion as the conference wraps up and one of the recommendations we’ll be making in the post-conference whitepaper: There’s an urgent need for more telescopes that can scan the sky for these NEOs, and a global network of telescopes that are working in concert, so that we can truly cover the smaller size range of asteroids in near-earth orbit. We definitively need to FIND these objects first before we can take any concrete action to defend ourselves against them.