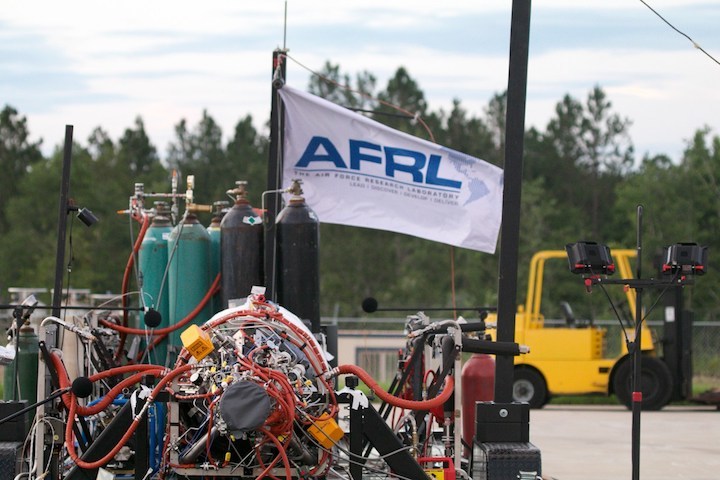 Generation Orbit Launch Services, Inc. (GO) has completed an initial integrated engine firing of a full-scale, functional prototype of the GOLauncher1 (GO1) hypersonic flight test booster. Under contract to the Air Force Research Laboratory, Aerospace Systems Directorate, High Speed Systems Division (AFRL/RQH), GO is developing GO1 to be an affordable and flexible hypersonic testbed to flight test a wide range of hypersonic vehicle technologies. The test was the first of its kind to be conducted at Cecil Spaceport in Jacksonville, FL. This is also GO’s first test campaign to include Ursa Major Technologies’ “Hadley” liquid rocket engine. The 5,000 lbf-class oxygen-rich staged combustion engine performed as expected through the tests.

GO1 is a single-stage liquid rocket, launched from a Gulfstream III carrier aircraft, primarily designed for hypersonic flight testing. The rocket vehicle propulsion system utilizes liquid oxygen and kerosene propellants. The system is designed to provide affordable and regular access to high dynamic pressure flight conditions between Mach 5 and Mach 8 to a wide range of payloads for fundamental research, technology development, and risk reduction. The first flight of GO1 is planned for late 2019.

Building up a series of cold flows and engine development tests, this test demonstrated integration of the engine with flight like propellant tanks, valves, pressurization system, and flight controls. Further, the test demonstrated the throttling capabilities of the system necessary to meet the thrust levels for Mach 6 cruise at 80,000 to 90,000 ft. This feature is a key enabler of GO1’s next-generation hypersonic flight testing capabilities for fundamental research and technology maturation.

GO CEO, AJ Piplica, commented on the program: “The culmination of several years of work in the successful testing of this GO1 prototype is a huge milestone in the product’s development. Completing a full end-to-end integrated system iteration prior to the completion of the vehicle design has allowed us to learn a massive amount, not only about how the system works, but also on the manufacturing and operations fronts. Completing this campaign at Cecil Spaceport also demonstrates the readiness of the facility to support near-term launch operations. We very much appreciate the opportunity and afforded us by AFRL to drive the development of GO1 as we continue to move toward ushering a revolution in hypersonic flight testing capabilities.”

AFRL/RQH’s Program Manager for GOLauncher1, Barry Hellman, expressed his confidence in the program: “The rapid prototyping of a new hypersonic flight test capability being done by Generation Orbit has been exemplary. It will provide AFRL with a capability to conduct routine hypersonic testing with a system that can be tailored to many technologies. The success of GO1 wouldn’t be possible without the opportunity provided by the Air Force Small Business Innovative Research (SBIR) program. Further, the facilities and support personnel at Cecil Spaceport have been outstanding hosts for this tests and are invaluable to the future success of the program.”

Also, Cecil Spaceport Director, Todd Lindner, stated “The successful completion of the Hadley liquid rocket engine test by Generation Orbit and the Air Force Research Lab (AFRL) serves as a milestone for Cecil Spaceport and demonstrates the validity and capabilities of the Cecil facilities and Generation Orbit.” Lindner concluded, “We look forward to continuing our support of this important program.”