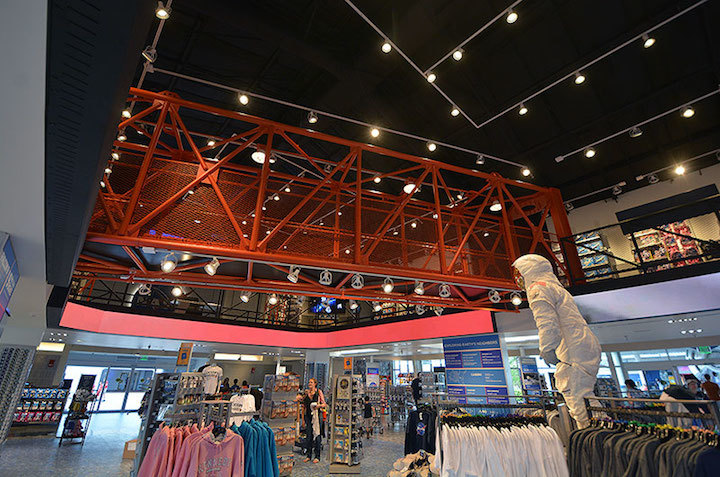 Forget the amusement park staple "exit through the gift shop" — the newly-renovated store at NASA's Kennedy Space Center Visitor Complex now has a historic exit off the planet.

Billed as the "world's largest space shop," the souvenir store now features a part of the launch pad gantry that Apollo 11 astronauts Neil Armstrong, Buzz Aldrin and Michael Collins walked across to begin the first moon landing mission nearly 50 years ago. The red grate swing arm now bridges the Space Shop's second floor, offering guests the opportunity to walk in the footsteps of the first humans to step on the moon.

"I think it awesome to be able to go upstairs and actually walk across the actual Apollo 11 gantry," said Therrin Protze, the chief operating officer of the Kennedy Space Center Visitor Complex in Florida, in an interview with collectSPACE. "This brings a piece of history to the gift shop."

Swing arm 9, which five decades ago was mounted 320 feet (100 meters) above the launch pad's surface, was in recent years displayed outdoors in the Kennedy Space Center Visitor Complex's Rocket Garden.

Guests could walk across the grounded metal gantry and look into the white room, the small, once-environmentally-controlled chamber that served as the interface between the launch umbilical tower (LUT-1) and the Apollo command module atop a Saturn V rocket.

In January 2017, part of the swing arm was incorporated into an exhibit honoring the lives of the fallen Apollo 1 astronauts in the visitor complex's Apollo/Saturn V Center. The 70-foot-long (21-meter) walkway though, was too long to display intact and so the remaining span was available for use in the Space Shop.

"As a Smithsonian affiliate, we work with their guidelines as to what guests can touch or not. The gantry was previously out in the elements and approved to be used by the guests many, many years ago," said Protze.

"We had to a do a huge restoration effort for it just a couple of years ago because of how corrosive this area's environment is outside. Now with it inside, hopefully its lifespan will be a lot longer, giving more guests the opportunity to appreciate its history," he said.

In addition to being used by the Apollo 11 astronauts in July 1969, this particular swing arm was crossed by the crews of Apollo 8 (the first mission to send humans to the moon in December 1968); all three crewed Skylab space station launches in 1973; and the Apollo-Soyuz Test Project (ASTP), the first joint mission between the United States and Russia in July 1975.

Say (the moon is made of) cheese!

While the gantry arm is the center of attention — the Space Shop uses the look of the artifact for its new entranceway arches — it is not the only new attraction.

The store's new features include a "customization station," where shoppers can personalize their gear and souvenirs; graphic displays of the rockets that launch from Kennedy Space Center and nearby Cape Canaveral Air Force Station; an Instagram wall for snapshots set against a mosaic of historic NASA photos; and two selfie stations where guests can take photos of themselves as astronauts to share via email and social media.

The selfies are not for the shy, though. The guests' faces, superimposed onto a spacewalking astronaut, then float through the store on a wraparound display and large screen.

"Gift shops are always part of this type of experience," Protze told collectSPACE. "When you come in here, instead of it being a static gift shop, we wanted to update it so visitors can learn things and see things that are happening here while they shop."

"So even if you come in a buy just a hat or a bottle of water, you get immersed in the entire story of the space program," he said.

And for every memento guests take home of their visit, they also contribute to the Kennedy Space Center Visitor Complex's continued ability to preserve and display the spaceport's legacy.

"There are no tax dollars used to support the visitor complex, so the admissions and souvenir sales help us keep the rockets and history intact," said Protze. 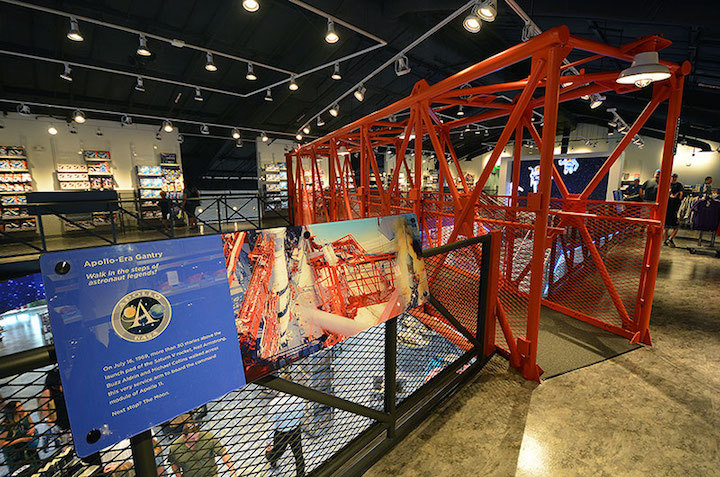 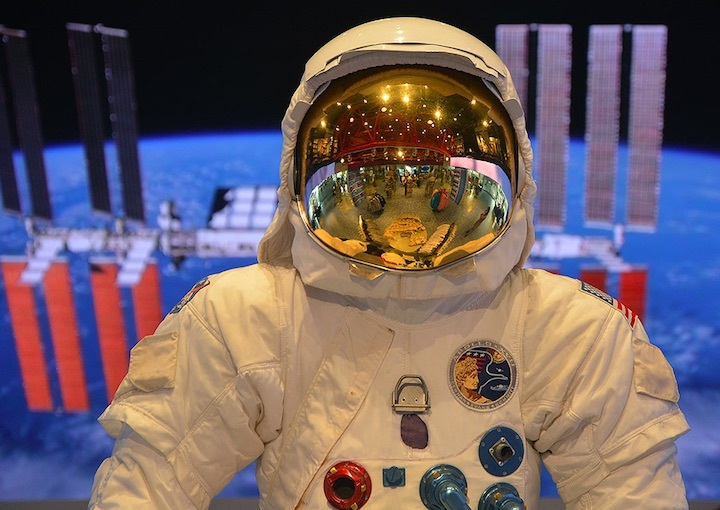