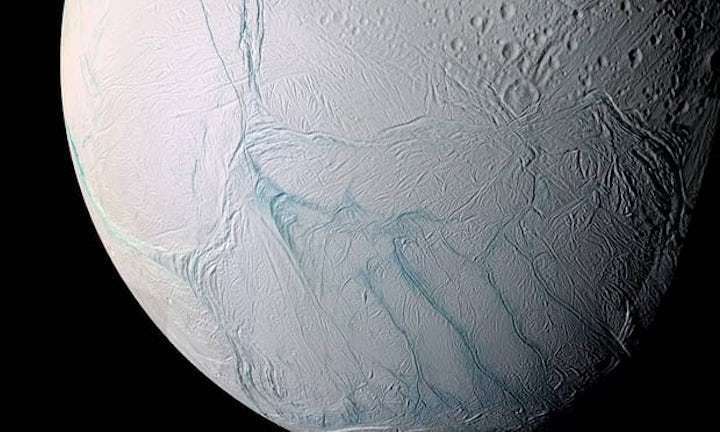 Blasts of ocean spray that erupt from a moon of Saturn contain complex organic molecules, making it the only place beyond Earth known to harbour crucial constituents for life as we know it.

Astronomers detected the compounds in plumes of water and ice that shoot from huge fractures in the south pole of Enceladus, a 300-mile-wide ice ball that orbits Saturn along with 52 other moons. Enceladus stands out among the planet’s natural satellites because it hosts a global water ocean beneath its frozen crust.

German and US scientists found tell-tale signs of organic molecules far more complex than amino acids and 10 times heavier than methane in data gathered by Nasa’s Cassini probe as it flew over the fractures on Enceladus. Known as “tiger stripes”, the fissures reach several miles down into the ice and are largely filled with ocean water that percolates up from the ocean.

The discovery has boosted calls to send another mission to Enceladus to answer once and for all whether life exists on the frigid body. While complex organics are necessary for life, and could even be remnants of alien microbes, the compounds can easily be made in routine reactions that have nothing to do with biology.

Frank Postberg, a planetary scientist who worked on the data at Heidelberg University, said that with modern instrumentation it would be straightforward to check Enceladus for signs of life. “You don’t have to land or drill, you just fly past,” he said. “This is not science fiction. You can just go there and check: is there life or not?”

The Cassini probe made several flybys of Enceladus during a mission to Saturn that lasted more than a decade and ended last year when it plunged into the planet. On one flyby in 2015, instruments on the probe sniffed hydrogen in the ocean spray, a potential food source for any microbes there.

Writing in the journal Nature, Postberg and his colleagues describe their analysis of fresh Cassini data that shows that most ice particles blasting out of Enceladus are almost pure water. But a small proportion, about 1%, are rich in organic molecules containing carbon, hydrogen, oxygen and potentially nitrogen too. Some were made up of hundreds of atoms. “Our results mark the first ever detection of complex organics coming from an extraterrestrial water world,” said Postberg.

Enceladus is believed to have a warm, porous core beneath its 50km-deep ocean. The scientists propose that organic compounds form in the water and rise up on bubbles where they gradually build up a surface scum. This matter is then turned into a spray when further bubbles burst, allowing the organics to be sucked out in plumes by the vacuum of space.

“Liquid water, a source of energy and organic molecules are required to support life as we know it. We now know that Enceladus’s ocean has all of these ingredients, today,” said Christopher Glein, a space scientist on the study at Southwest Research Institute in Texas. “Besides Earth, no other place in the solar system has confirmed evidence of all three requirements in a contemporary environment that can support life.

“What’s even more exciting is that this habitable environment on Enceladus is readily accessible via the plume. It’s a potential gold mine for astrobiology.”