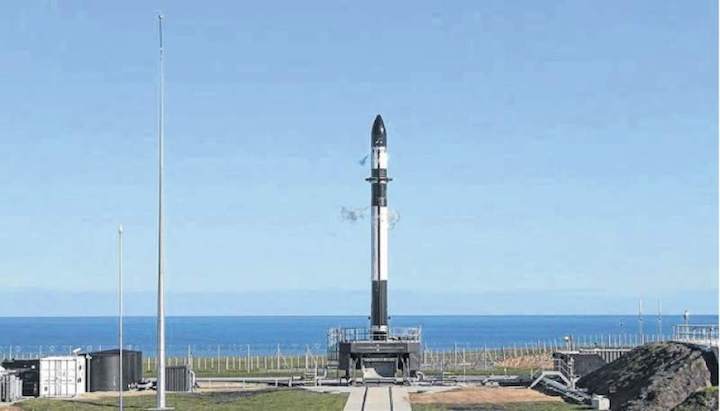 The US-NZ start up Rocket Lab is going to attempt its first fully commercial launch. Picture from Twitter-Rocket Lab

Rocket Lab has abandoned today's planned launch of its Electron rocket from Mahia.

The company said problems recovering a downrange ground station in the Chatham Islands, which will track the Electron rocket as it climbs into orbit, was the reason.

Officials have not set a new target launch date.

Today was the first of a 14-day launch window, with daily launch opportunities between 12.30pm and 4.30pm.

The launch window, originally slated for April 20 to May 3, 2018, was moved after unusual behaviour was identified in a motor controller during a wet dress rehearsal.

The cause of the issue was found and corrective measures put in place.

The payloads will be launched to a 500km x 250km elliptical orbit at 85 degrees, before being circularised using Rocket Lab's Curie engine powered kick stage.

The Electron rocket has had two successful test flights, one in May last year, and the other in January 2018.

Rocket Lab's Electron rocket is relatively small. At almost 17 metres tall, it's a fraction of the height of SpaceX's 70-metre-tall Falcon 9. But Electron aims to deliver small satellites between 150kg and 225kg into low Earth orbit at a lower price.

The weather looked promising for a successful launch attempt, a company spokeswoman said this week.

“Clear skies and a lack of high altitude wind are ideal launching conditions.

“We’ll be keeping an eye on upper level winds and a phenomenon called triboelectrification, which is a build-up of static electricity on the rocket as it soars through high-level clouds.”

The NABEO drag sail passively de-orbits inactive, small satellites. The small sail is an ultra-thin membrane that is deployed once the satellite reaches the end of its orbital lifespan.

The design enables a faster de-orbit and reduces the amount of space junk in low Earth orbit. The sub-system will be tested for the first time on this mission.

A livestream will begin approximately 15 minutes before lift-off at www.rocketlabusa.com/live-stream

A spokeswoman for the US-based orbital launch provider said today's launch was scrubbed for the day after the team identified an issue with a motor controller.

"The decision was made to scrub today's launch attempt in order to review the data ahead of another attempt.

"The Rocket Lab team is in the process of closing out pad operations for the day."

The call to scrub was made shortly after the Electron rocket was filled with liquid oxygen (LOX).

"It's standard practice to vent LOX throughout launch operations.

"As is standard procedure, emergency services are on standby during launch operations and were called closer to the launch site as a precautionary measure only.

"Electron is fueled by liquid oxygen and RP1 (kerosene)."

The payload for the launch includes (among others) IRVINE01, an educational payload from the Irvine CubeSat STEM Programme (ICSP), and NABEO, a drag sail technology demonstrator created to passively de-orbit inactive small satellites, designed and built by High Performance Space Structure Systems GmBH.

The Lemur-2 cubesats would be used to provide commercial ship-tracking and weather monitoring services.