About a decade ago, astronomers discovered a population of small, but massive galaxies called “red nuggets.” A new study using NASA’s Chandra X-ray Observatory indicates that black holes have squelched star formation in these galaxies and may have used some of the untapped stellar fuel to grow to unusually massive proportions.

Red nuggets were first discovered by the Hubble Space Telescope at great distances from Earth, corresponding to times only about three or four billion years after the Big Bang. They are relics of the first massive galaxies that formed within only one billion years after the Big Bang. Astronomers think they are the ancestors of the giant elliptical galaxies seen in the local Universe. The masses of red nuggets are similar to those of giant elliptical galaxies, but they are only about a fifth of their size. 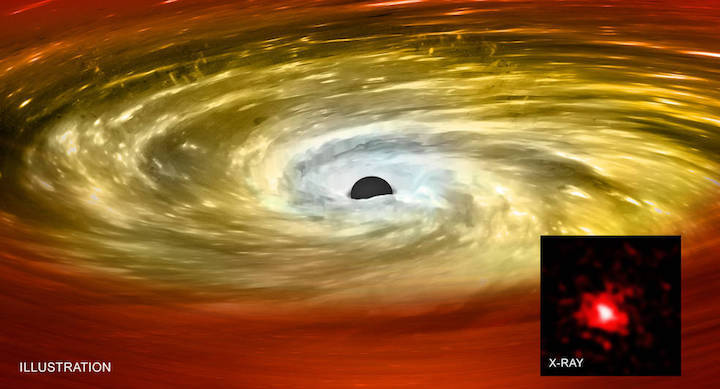 For the first time, Chandra has been used to study the hot gas in two of these isolated red nuggets, MRK 1216, and PGC 032673. They are located only 295 million and 344 million light years from Earth respectively, rather than billions of light years for the first known red nuggets. This X-ray emitting hot gas contains the imprint of activity generated by the supermassive black holes in each of the two galaxies.

“These galaxies have existed for 13 billion years without ever interacting with another of its kind,” said Norbert Werner of MTA-Eötvös University Lendület Hot Universe and Astrophysics Research Group in Budapest, Hungary, who led the study. “We are finding that the black holes in these galaxies take over and the result is not good for new stars trying to form.”

Astronomers have long known that the material falling towards black holes can be redirected outward at high speeds due to intense gravitational and magnetic fields. These high-speed jets can tamp down the formation of stars. This happens because the blasts from the vicinity of the black hole provide a powerful source of heat, preventing the galaxy’s hot interstellar gas from cooling enough to allow large numbers of stars to form.

The temperature of the hot gas is higher in the center of the MRK 1216 galaxy compared to its surroundings, showing the effects of recent heating by the black hole. Also, radio emission is observed from the center of the galaxy, a signature of jets from black holes. Finally, the X-ray emission from the vicinity of the black hole is about a hundred million times lower than a theoretical limit on how fast a black hole can grow – called the “Eddington limit” – where the outward pressure of radiation is balanced by the inward pull of gravity. This low level of X-ray emission is typical for black holes producing jets. All these factors provide strong evidence that activity generated by the central supermassive black holes in these red nugget galaxies is suppressing the formation of new stars.

The black holes and the hot gas may have another connection. The authors suggest that much of the black hole mass may have accumulated from the hot gas surrounding both galaxies. The black holes in both MRK 1216 and PGC 032873 are among the most massive known, with estimated masses of about five billion times that of the Sun, based on optical observations of the speeds of stars near the galaxies’ centers. Furthermore, the masses of the MRK 1216 black hole and possibly the one in PGC 032873 are estimated to be a few percent of the combined masses of all the stars in the central regions of the galaxies, whereas in most galaxies, the ratio is about ten times less.

“Apparently, left to their own devices, black holes can act a bit like a bully,” said co-author Kiran Lakhchaura, also of MTA-Eötvös University.

“Not only do they prevent new stars from forming,” said co-author Massimo Gaspari, an Einstein fellow from Princeton University, “they may also take some of that galactic material and use it to feed themselves,”

In addition, the hot gas in and around PGC 032873 is about ten times fainter than the hot gas around MRK 1216. Because both galaxies appear to have evolved in isolation over the past 13 billion years, this difference might have arisen from more ferocious outbursts from PGC 032873's black hole in the past, which blew most of the hot gas away.

“The Chandra data tell us more about what the long, solitary journey through cosmic time has been like for these red nugget galaxies,” said co-author Rebecca Canning of Stanford University. “Although the galaxies haven’t interacted with others, they’ve shown plenty of inner turmoil.”

A paper describing these results in the latest issue of the Monthly Notices of the Royal Astronomical Society journal and is available online (http://lanl.arxiv.org/abs/1711.09983). NASA's Marshall Space Flight Center in Huntsville, Alabama, manages the Chandra program for NASA's Science Mission Directorate in Washington. The Smithsonian Astrophysical Observatory in Cambridge, Massachusetts, controls Chandra's science and flight operations.