Experts say that some sort form of regulation is needed, and soon 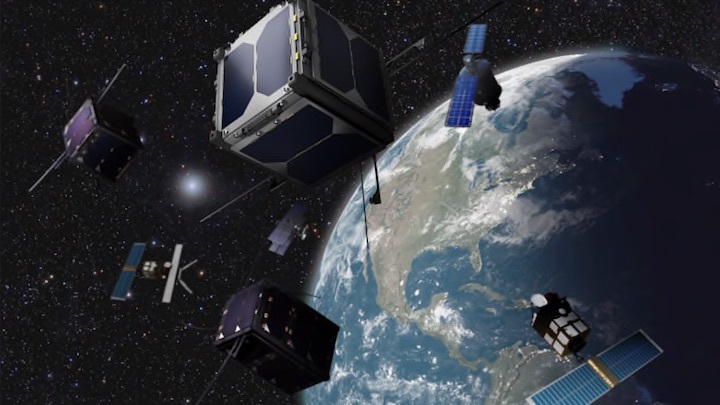 With more companies looking to launch satellites, countries and organizations are in need of a framework to address the regulation of space. (CBC News)

In January, an Indian rocket arced across the sky over the island of Sriharikota as it soared into space. On board were several satellites, including an Indian mapping satellite, one from Canada and one from an asteroid mining company.

The rocket also contained four satellites that were actually denied permission to launch in the first place.

The rogue satellites belonged to Swarm Technologies, a private artificial intelligence company headed by Canadian-born Sara Spangelo and based in Silicon Valley. The satellites — called SpaceBees — are only about 10 centimetres across.

And therein lies the problem: The U.S. Federal Communications Commission (FCC) denied the company permission to launch from the U.S. precisely because the satellites were too small to accurately track, and posed a potential danger to other satellites.

But if you're not allowed to launch from the U.S., why not launch from another country that's willing to take your money? So, that's exactly what Swarm did.

The unapproved launch incident highlights a regulatory challenge in the era of "new space," with the arrival of commercial companies on the space stage. CubeSats — satellites that can be as small as 10 x 10 x 10 centimetres — are cheap, easy to make and easier to launch than conventional satellites. As a result, more and more companies are doing it. There are even "constellations" of hundreds of these miniature satellites.

Observers say the challenge is how to regulate a burgeoning industry, and prevent Earth's orbit from becoming the new Wild West.

"There's a hole in the system," said Cassandra Steer, acting executive director of the Center for Ethics and the Rule of Law at the University of Pennsylvania, and a Canadian who specializes in international law. "We have to be more reactive."

There actually is an international governing body for this sort of thing: the United Nations Office for Outer Space Affairs (UNOOSA). Though the name may sound somewhat fanciful, it's clear that UNOOSA is becoming increasingly relevant.

The body deals with the peaceful uses of space and space exploration development, as well as the establishment of space principles and more. But there are no binding rules, and noticeably absent are any regulations addressing the private commercialization of space.

However, as more countries — as well as private companies — vie for a place in space, it's clear the agency needs to revisit the decades-old treaties, not to mention its own role.

I, unfortunately, believe it's going to take a disaster or conflict of international proportions for something to actually take place.- Cassandra Steer,  Center  for Ethics and the Rule of Law

As it stands, UNOOSA states that each country is responsible for issuing permits and licences to organizations launching anything into space. It says nothing about business.

Prior to its India launch, Swarm did something referred to as "forum shopping" — having been denied a launch in the U.S., it cast about for a locale that would cooperate.

So what's to stop others from doing the same?

"Self interest: I think that's what's going to be the thing that pushes us internationally towards a new regime," said Steer. 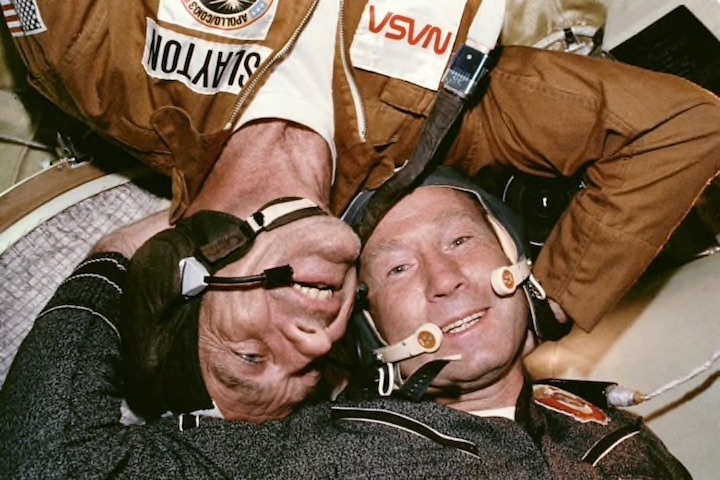 On July 17, 1975, Soviet cosmonaut Alexey Leonov, left, and U.S. astronaut D.K. Slayton, right, met in space as part of the Apollo-Soyuz mission, marking the start of a relationship between the U.S. and Russia that continues to this day. (NASA)

There's actually a history of cooperation in the name of self-interest. At the dawn of the space age, the United States and U.S.S.R. certainly didn't want to share orbital information about their spacecraft, even if it was debris that could impact the other.

However, over time, it became apparent that secrecy was not in anyone's best interest. Debris could destroy a costly spacecraft or pose a danger to astronauts. Soon, the two countries were forced to share information. Eventually, a sort of partnership formed that, while somewhat tenuous, continues to this day.

It was interdependence that lead to cooperation. And this is the model that experts believe is likely to continue.

Steer said practices that have been in place for more than 50 years are likely to produce some sort of restraining effect, but she said, "we do need... an international regime to regulate this."

Turning to the airline industry

Some think we should look to the aviation industry. The first commercial air flight took place almost 100 years ago. While countries like Great Britain, the United States and Germany devised their own regulations, the first global governing body — the International Civil Aviation Organization (ICAO) — was founded by the United Nations in 1944.

Headquartered in Montreal, the ICAO works with 192 member states on devising and implementing international standards. And some believe that the regulation of space travel could come under the ICAO's purview.

The advantage? They have existing standards and expertise.

"Some aviation is going to go into space," Steer said. "So there are people thinking about this and discussing this. There have been meetings at ICAO and the committee at the UN that deals with this element."

But she noted that things are progressing slowly. In the meantime, we rely on countries — and companies — to operate in good faith.

The current pace of space travel, however, concerns Steer.

"I, unfortunately, believe it's going to take a disaster or conflict of international proportions for [rules to be put in place]," Steer said.

"Maybe now countries that have an active space program … we'll look at this and say, 'What will we do if another instance like this occurs?" she said.

As it turns out, Swarm's defiance came at a price. The FCC set aside the grant for the company to launch additional satellites in April.

But it's not just about countries taking responsibility, Stojak said. Industry should as well.

"If you're in a space field in general, you should be accountable. It raises the whole approach to the use of space as a global commons," she said. "It's going to be interesting times."