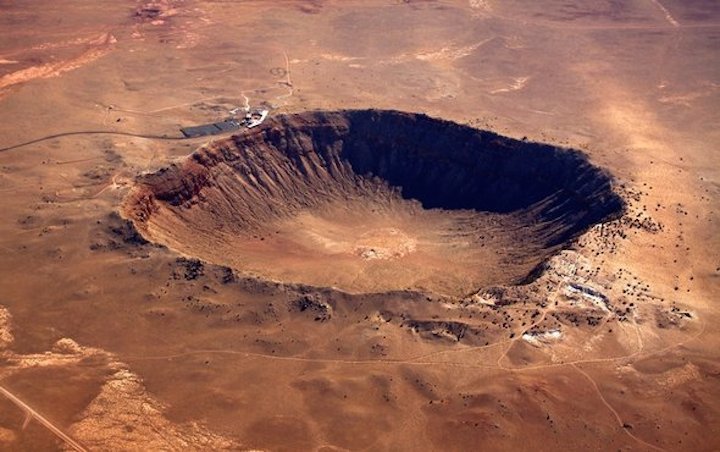 When a meteorite containing graphite slams into the earth, the collision’s heat and pressure can transform this form of carbon into a rare and extremely hard type of diamond. Scientists have long debated exactly how this happens at the atomic level. Now researchers can answer some questions after simulating the precise moment of impact and watch­ing this transformation take place in real time.

In a first-of-its-kind collision chamber at Argonne National Laboratory, physicist Yogendra Gupta of Washington State University and his colleagues mimicked a meteorite impact by firing a lithium fluoride bullet at a graphite disk at 5.1 kilometers per second. Extremely bright x-rays “photographed” the event at 150 billion frames per second.

“In the meteorite world, one always asks if this transition from graphite to diamond happens during compression or as a combination of deformation and [stress release] after the shock,” Gupta says. “We show very nicely that it happens during compression.” Specifically, this rare “hexagonal diamond”—so named for its crystal structure—forms at a pressure of 500,000 atmospheres and on the timescale of billionths of a second. This finding suggests that the impact needed to form this kind of diamond might not be as violent as was previously believed.

Earlier research suggested hexagonal diamond forms only at pressures nearly four times as high—but “that’s been a great controversy,” Gupta says. Other studies showed graphite beginning to transform at lower pressures, but x-ray measurements from these experiments reveal a mixture of different diamond types, so “nobody knows exactly how the transition happens,” he explains. Most prior research examined atomic transformations under gradual compression. In contrast, Gupta and his colleagues’ experiments show hexagonal diamond forming directly from graphite during a sudden shock, in perfect alignment with the impact direction. The study was published last October in Science Advances.

“What is most exciting about this work is the way in which the researchers determined the precise locations of the atoms while en route from one crystal structure to the other,” says Lorin Benedict, a physicist at Lawrence Livermore National Laboratory, who was not involved in the work.

The diamond held its form after the pressure was dialed down—but Gupta wants to know whether it will remain stable when the stress is reduced to zero. Such experiments might lead to a novel way to create diamonds for industrial use.