In mid-June, Wim van Utrecht circulated the news that he determined the Trepang UFO photographs were a hoax. His statement read:

I think I may have solved the riddle of those spectacular UFO photos that were supposedly taken from a USS navy submarine during a joint military/scientific mission NE of Iceland in March 1971. (See, for instance, http://www.theblackvault.com/casefiles/arctic-ufo-pho- tographs-uss-trepang-ssn-674-march-1971/)

They are, indeed, “photoshopped”... The hoaxer made a glaring error which, if I’m not mistaken, went unnoticed till now: he used two identical cloud parts in one of the shots. I’m attaching a hastily crafted Word document that makes this clear. 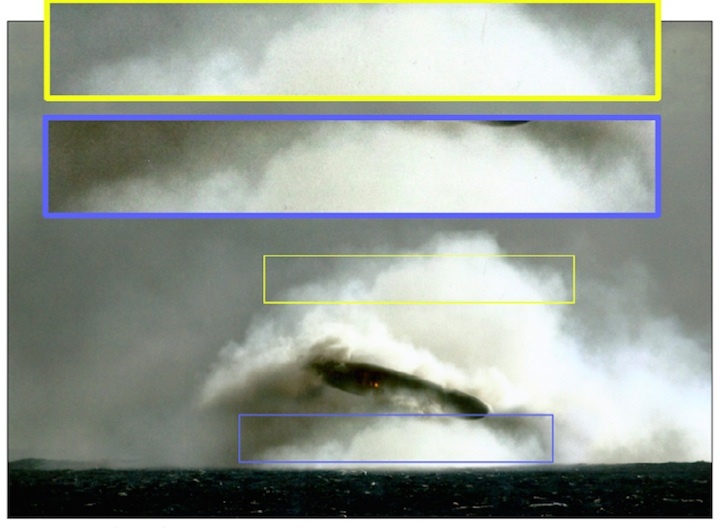 I believe Wim’s work speaks for itself but I want to repost my comments I made about these photographs in SUNlite 7-5:

Looking at the images and reading the story, I found a lot of things to question. The first thing has to do with the source of the images, which is not given. The second is the description. At one point they claim that an officer on the periscope was the first person to see the UFO. However, the name given is of an enlisted man,who was an Interior Communications Technician (IC). When at periscope depth, an officer (usually the Captain) manned the periscope. It is not the time for skylarking by an enlisted man. I was also unimpressed by the quality of the photographs. They look like something taken in 1941 and not 1971. While portions of the story sound credible, most of the story makes me wonder if it isn’t just another hoax being presented to the UFO community. Most of the details about the Trepang’s oper- ations are readily available on the Internet. At one point it was suggested that an Admiral was on board. However, that was an incorrect assumption based on the career of the Trepang’s commanding officer. Unlike “Voyage to the bottom of the sea”, the commanding officer of submarines were usually Commanders and, sometimes, Captains (O-5 or O-6). Admirals rarely stayed aboard on submarines for long missions. My experience was they usually went out to sea for a day or two and then were dropped off. Like so many “UFOlogical smoking guns”, without provenance, these photographs are just another campfire story.

It turns out the “admiral” was actually the Commanding Officer, who later became an admiral. This indicated the source was not familiar with submarines or navy ranks. As I pointed out in my comments, the rest of the story was questionable. If readers are interested in submarine operations during the cold war, I suggest they read the book “Blind man’s bluff ”.

Many thanks to Wim van Utrecht’s for his work on these photographs. We can now cross this case off of the “unexplained” list.