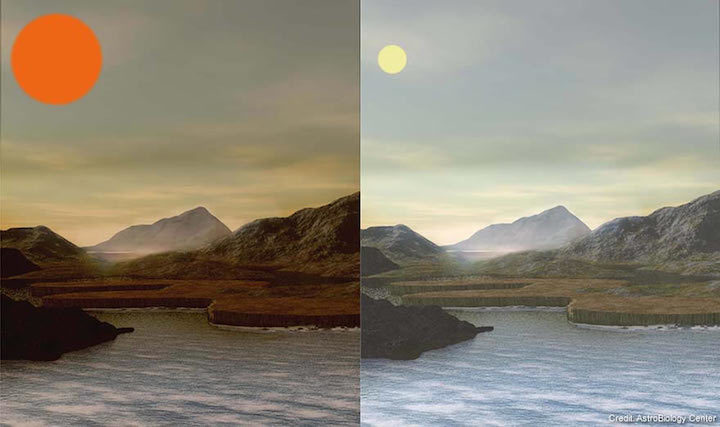 Photosynthesis under the light conditions different from the Earth: New prediction of a detection wavelength for searching phototrophs on exoplanets

M-dwarfs or red dwarfs are small (0.5-0.1 solar-masses) and cool ( ~3000 Kelvin) stars, and are abundant in universe. The Sun-like stars have been attracting most attention as a plausible target for searching habitable exoplanets. However, nearby M-dwarfs are becoming the most extensive targets for habitable planet searches because they are the most abundant nearby stars and thus could be the first candidate for detecting any biosignatures on exoplanets via transit or direct imaging observations in near future.

One of the most important exoplanetary biosignatures is a specific reflection pattern on the land surface named ‘red-edge’, which is caused by vegetation such as forests and grasslands. On the Earth, red-edge appears between red and infrared (IR) wavelengths, since red-light is absorbed for photosynthesis while IR radiation is reflected. In previous studies, it was predicted that red-edge position on exoplanets should be decided by the radiation spectrum by nearby stars. Around M-dwarfs, red-edge was expected to be shifted to a longer wavelength, since planets on the exoplanets use abundant IR radiation for photosynthesis.

Researchers at the Astrobiology Center (ABC) of National Institutes of Natural Science (NINS) in Japan and their colleagues have proposed and alternative prediction that red-edge could be observed as on the Earth even on exoplanets around M-dwarfs in the online journal Scientific Reports on August 8th, 2017. They pointed out that the first oxgenic photorophs are most likely to have evolved underwater to utilize visible light just like what had happened in the primordial ocean on the Earth. They examined light adaptation mechanisms of visible- and IR-radiation-using phototrophs required for adapting to land habitats and found out that IR-using phototrophs struggle to adapt to changing light condition at the boundary of water and land surface. Kenji Takizawa, read author of the study, said “It is too risky to utilize IR-radiation during water-to-land evolution.”

If phototrophs keep their photosynthetic apparatus for landing, the red-edge position of the land surface on M-dwarf planets show just like as on the Earth, at the initial stage of land vegetation. Therefor, non-shifted red-edge should be kept in mind for searching habitable planets around M-dwarfs and perparation of such biosignature-hunting instruments.