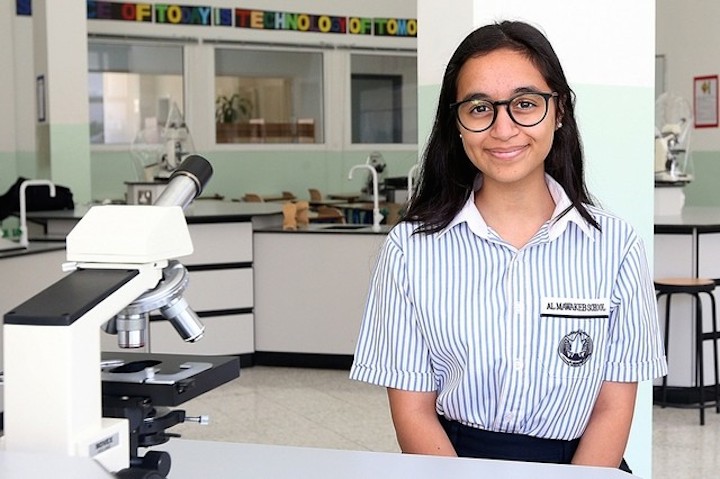 ABU DHABI // Since she won the Genes in Space competition earlier in this year, school pupil Alia Al Mansoori’s life has been transformed.

From meeting Sheikh Mohammed bin Zayed at the Sea Palace, to training to be an ambassador at Expo 2020, fine-tuning her experiment and attending school, Alia’s schedule is busier than it has ever been.

In a national competition, which challenged pupils to come with an experiment that applied DNA analysis to real-life challenges in space exploration, Alia’s winning idea was chosen from an 110 entries and then five finalist teams of eight pupils at the Global Space Congress in Abu Dhabi.

Alia will look on as her experiment – which aims to study how exposure to space affects the health of live organisms at the cellular level – is launched into space from the Kennedy Space Centre in Florida later this year.

Once in orbit, the experiment will be tested by astronauts on the International Space Station.

"I don’t mind my life being jam-packed, it helps me learn how to manage my time" said the 14-year-old who is in Bahrain on a two-week course to learn more about volunteering.

Having won the competition, the Al Mawakeb School Grade 9 pupil said she felt a duty to promote the sciences among the youth of UAE.

"It is a big responsibility, but I want to contribute to spreading the idea of innovation" she said. "The field of science was once a big part of the Arab world and we are trying to get it back."

With the latest deadline for the submission of her final project on July 24, a day after her birthday, in order to prepare the experiment for launch in August, Alia said she still had a lot of work to do.

Ensuring her experiment is fine-tuned and meets the guidelines required aboard the ISS is her mentor Tessa Montague, who has been paired with Alia since November.

Ms Montague, who is pursuing a doctoral degree in molecular biology at Harvard University, said although the nine-hour time difference between Abu Dhabi and her Boston offices posed a challenge, Alia’s determination helped her shine through.

The two settled on Skyping regularly before Ms Montague went to bed and just as Alia awoke.

"She would wake up blurry-eyed at 6am before school or even on a weekend, which is a testament to her dedication," said the 28-year-old academic.

What was evident to the Harvard graduate was Alia’s enthusiasm and her ability to comprehend information quickly.

"I was really impressed with how quickly she picked up with the concepts I introduced to her, some of which were one, two, or three years beyond high school level."

In their most recent conversation, Ms Montague said she was surprised when Alia displayed the ability to utilise new data to predict experimental results.

"When I told her how impressed I was, she said: ‘It’s probably because I’ve been talking about this stuff in my genetics club. Each time I learn something, I go and teach everyone else about it, so they know, too.’

"I think that says a lot about the kind of person Alia is," she said.

Ms Montague’s extensive work with science outreach programmes as well her childhood desire to become an astronaut – something she shares with Alia – led to her involvement in Genes in Space.

Having volunteered for programmes promoting science among underprivileged and autistic students, Ms Montague asked to be paired with a female student in the UAE contest.

"I hadn’t focused on promoting women in science so it was an area I wanted to work on," she said.

Unlike other community programmes, at which she met with a large group of students for a few hours whom she would never see again, Ms Montague said she has enjoyed working one-on-one with Alia and seeing her development.

Having also won a national science competition as a teenager in her native UK, Ms Montague said Alia would benefit greatly from the experience.

"It is such a positive affirmation that you’re doing something you are good at and you should stick to it. It’s a fantastic opportunity and it is great to see her becoming a role model in the UAE," she said.