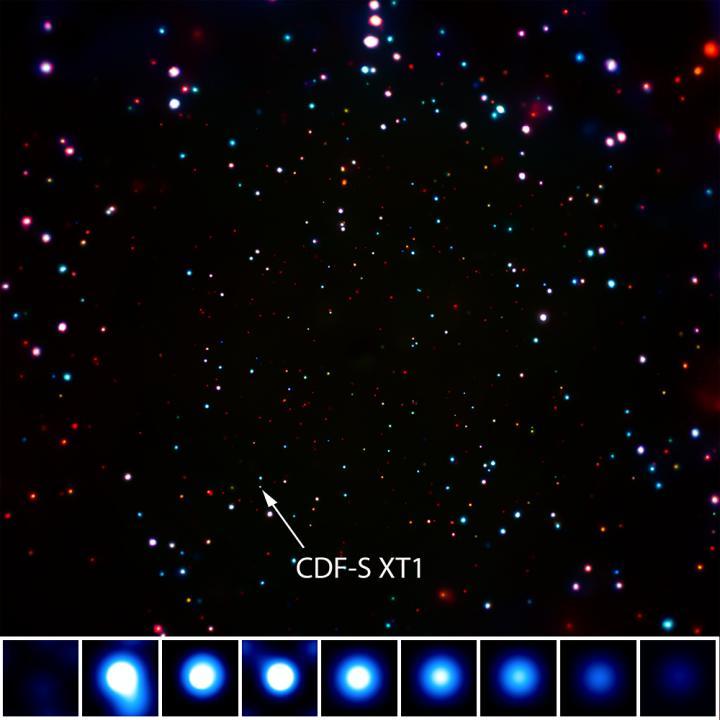 X-ray image of the Chandra Deep Field-South, the region of the sky where the flaring X-ray source was discovered. This is the deepest X-ray image ever created, made with about 7 million seconds of observing time with NASA's Chandra X-ray Observatory. The location of the flaring source, named 'CDF-S XT1,' is marked with the white arrow. The series of small images along the bottom show the variability of the flaring X-ray source over time (with time increasing from left to right, spanning a period of a few hours).

A mysterious flash of X-rays has been discovered by NASA's Chandra X-ray Observatory in the deepest X-ray image ever obtained. This source likely comes from some sort of destructive event, but it may be of a variety that scientists have never seen before.

The X-ray source was originally discovered in October 2014 by Bin Luo, a Penn State postdoctoral researcher; Niel Brandt, the Verne M. Willaman Professor of Astronomy and Astrophysics and professor of physics at Penn State; and Franz Bauer, an associate professor of astrophysics at the Pontifical Catholic University of Chile in Santiago, Chile. Luo has since moved from Brandt's group to become a professor of astronomy and space science at Nanjing University in China, and Bauer had been a postdoctoral researcher in Brandt's group from 2000 to 2003. The data were gathered using the Advanced CCD Imaging Spectrometer on Chandra, an instrument conceived and designed by a team led by Penn State Evan Pugh Professor Emeritus of Astronomy and Astrophysics Gordon Garmire.

"This flaring source was a wonderful surprise bonus that we accidentally discovered in our efforts to explore the poorly understood realm of the ultra-faint X-ray universe," said Brandt. "We definitely `lucked out' with this find and now have an exciting new transient phenomenon to explore in future years."

Located in a region of the sky known as the Chandra Deep Field-South (CDF-S), the X-ray source has remarkable properties. Prior to October 2014, this source was not detected in X-rays, but then it erupted and became at least a factor of 1,000 brighter in a few hours. After about a day, the source had faded completely below the sensitivity of Chandra.

Thousands of hours of legacy data from the Hubble and Spitzer Space Telescopes helped determine that the event came from a faint, small galaxy about 10.7 billion light years from Earth. For a few minutes, the X-ray source produced a thousand times more energy than all the stars in this galaxy.

"Ever since discovering this source, we've been struggling to understand its origin," said Bauer. "It's like we have a jigsaw puzzle but we don't have all of the pieces."

Two of the three main possibilities to explain the X-ray source invoke gamma-ray burst (GRB) events. GRBs are jetted explosions triggered either by the collapse of a massive star or by the merger of a neutron star with another neutron star or a black hole. If the jet is pointing towards the Earth, a burst of gamma-rays is detected. As the jet expands, it loses energy and produces weaker, more isotropic radiation at X-ray and other wavelengths.

Possible explanations for the CDF-S X-ray source, according to the researchers, are a GRB that is not pointed toward Earth, or a GRB that lies beyond the small galaxy. A third possibility is that a medium-sized black hole shredded a white dwarf star.

"None of these ideas fits the data perfectly," said co-author Ezequiel Treister, also of the Pontifical Catholic University, "but then again, we've rarely if ever seen any of the proposed possibilities in actual data, so we don't understand them well at all."

The mysterious X-ray source was not seen during the two-and-a-half months of exposure time Chandra has observed the CDF-S region, which has been spread out over the past 17 years. Moreover, no similar events have yet to be found in Chandra observations of other parts of the sky.

This X-ray source in the CDF-S has different properties from the as yet unexplained variable X-ray sources discovered in the elliptical galaxies NGC 5128 and NGC 4636 by Jimmy Irwin of the University of Alabama and collaboratorsUniversity of Alabama and collaborators. In particular, the CDF-S source is likely associated with the complete destruction of a neutron star or white dwarf, and is roughly 100,000 times more luminous in X-rays. It is also located in a much smaller and younger host galaxy, and is only detected during a single, several-hour burst.

"We may have observed a completely new type of cataclysmic event," said co-author Kevin Schawinski, of ETH Zurich in Switzerland. "Whatever it is, a lot more observations are needed to work out what we're seeing."

Additional highly targeted searches through the Chandra archive and those of ESA's XMM-Newton and NASA's Swift satellite may uncover more examples of this type of variable object that have until now gone unnoticed. Future X-ray observations by Chandra and other X-ray observatories such as the planned Chinese Einstein Probe also may reveal the same phenomenon from other objects.

If the X-ray source was caused by a GRB triggered by the merger of neutron star with a black hole or another neutron star, then gravitational waves would also have been produced. . If such an event were to occur closer to Earth, it may be detectable with the Laser Interferometer Gravitational-Wave Observatory (LIGO).

An in-depth paper describing this result appears in the June 2017 issue of Monthly Notices of the Royal Astronomical Society and is available online. The original discovery was briefly reported in The Astronomer's Telegram in 2014 by Luo, Brandt, and Bauer. NASA's Marshall Space Flight Center in Huntsville, Alabama, manages the Chandra program for NASA's Science Mission Directorate in Washington. The Smithsonian Astrophysical Observatory in Cambridge, Massachusetts, controls Chandra's science and flight operations.