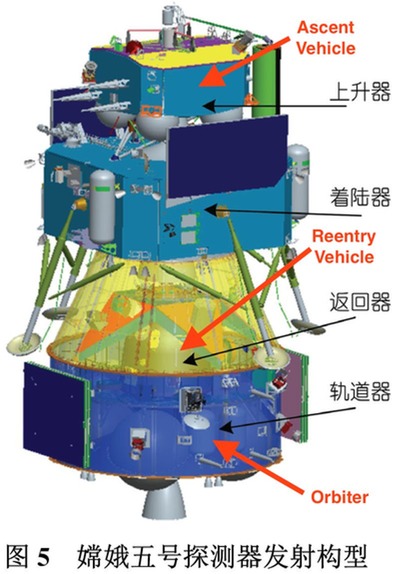 A future lunar probe could be setting China up for a manned mission next decade.
After details were released late last month of the Chang’e 5 mission—a robotic lander that will collect samples from the lunar surface and return them to Earth in 2017—several international observers noticed that it looked like a smaller version of a human descent vehicle. While Chinese officials have indicated they are interested in a potential future manned lunar missions, the government doesn’t have any specific plans. Chang’e 5 could change that.
“There have been no confirmations in official reports and articles that Chang’e 5 is a scaled-down version of the manned vehicle,” said Chen Lan, who edits Go Taikonauts!, a web magazine that follows China’s space program. But, he added, the evidence is very suggestive.
The Chang’e 5 mission involves putting a large lander on the moon’s surface and scooping up samples. Once collected, the lunar material would be launched off the surface in an ascent vehicle that would dock with an orbiting spacecraft. The samples would then be transferred to a reentry vehicle that would bring them to Earth. The scenario sounds quite similar to the U.S. Apollo missions.
As several news articles pointed out, the Chang’e 5 reentry vehicle seems rather large. Perhaps the Chinese would just like to collect a lot of samples, but the vehicle just happens to be large enough to fit a person inside. The vehicle won’t be carrying any human cargo in 2017, but a successful Chang’e 5 mission would give the Chinese a great deal of engineering experience and technical knowhow for a human touchdown on the moon. The spacecraft needs little more than scaling up and the addition of life support to become a full-fledged manned lander.
“Simply put, China’s robotic lunar program is starting to look like a stalking horse for an eventual human lunar effort,” wrote space historian Dwayne Day on The Space Review website.
The idea that China might attempt to put people on the moon in the very near future gets trotted out now and then by members of the U.S. space community who hope it will bring out America’s competitive spirit and spark another moon race. But there hasn’t always been a lot of evidence to support that idea. The Chinese space agency, CNSA, has been open about its intent to launch humans to low-Earth orbit and develop a large space station there, a goal towards which it has made great progress. But its lunar ambitions have usually been more vague.
In 2005, CNSA developed a three-stage plan for robotic lunar exploration. The first phase involved orbiting a spacecraft around the moon, a task the agency accomplished in 2007 and 2010. The second was to land a probe and rover on its surface. That mission, Chang’e 3, made international headlines for being the first robot to soft land on the moon in nearly 40 years. Its rover, Yutu—Jade Rabbit in English—was a star in China, with an unofficial Weibo account (China’s version of Twitter) that collected more than 600,000 followers and posted regular, occasionally poignant updates.
Chang’e 4 is scheduled to launch next year and will mainly be a repeat of Chang’e 3 and its rover. In public, Chinese officials have said they won’t make a decision on a manned lunar mission before 2017, the same year that Chang’e 5 is expected to land on the moon. But Chen Lan of Go Taikonauts! believes that planners had in mind potential future human missions when they first drew up their three-phase robotic plans.
In addition, the Chinese space community has for years been pushing for a powerful heavy-lift rocket, capable of delivering large spacecraft to Earth orbit and beyond. Such a rocket now seems to be in the very early stages of development.
“If it can be approved later this year or next year, as some people expect, it will be an important milestone and the prospect of the manned lunar landing mission will become bright,” said Lan.
China’s future economic or political situation could slow such plans down, he added, though they seem unlikely to stop them. NASA’s goals have a tendency to change whenever a new administration comes to power. The Chinese space agency, in contrast, has shown a remarkable capacity for long-term planning and execution of its ideas. And that makes a manned lunar mission all the more likely.
“It will be in the next decade, if all goes well,” said Lan. And if not then, he said, a decade after that wouldn’t be so bad either.
Quelle: WIRED
-
Update: 16.02.2016
.
Chinese scientists invent leak detection system for moon exploration 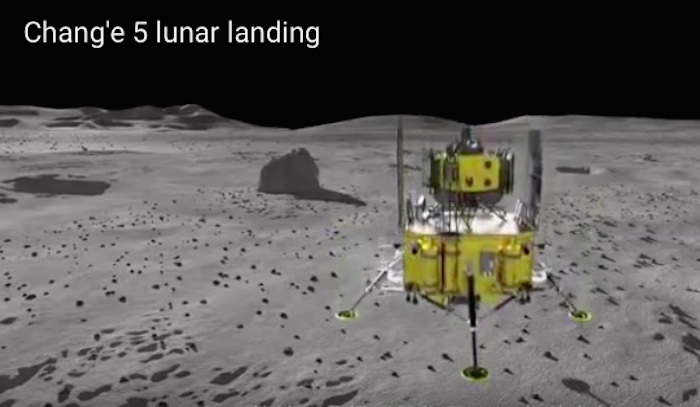 Chinese scientists have developed a system to measure the leak rate for a vacuum environment which will be used in the country's third step moon exploration program.
According to scientists at the Lanzhou Institute of Physics under the China Academy of Space Technology, the measurement system will help scientists figures out a better way to preserve samples from the moon, which are stored in a vacuum capsule, increasing the accuracy of research.
"The third step of the lunar exploration project involves taking samples from the surface of the moon back to earth," said Li Detian, chief scientist of the research team.
"The samples will be packed in a vacuum environment. The accuracy of measuring the finest leak in a vacuum capsule will have direct impact on the research result of the samples," he said.
According to Cheng Yongjun, another scientist of the team, the system they developed will ensure a similar vacuum environment as found on the moon for the samples. It will also make sure that the two kilograms samples remain uncontaminated on their way back to earth, preventing them from being affected by any kinds of environment changes including extremely high and low temperature.
China has a three-step moon exploration project; orbiting, landing and return. Chang'e-5 lunar probe is expected to be launched around 2017 to finish the last chapter of the project.
. 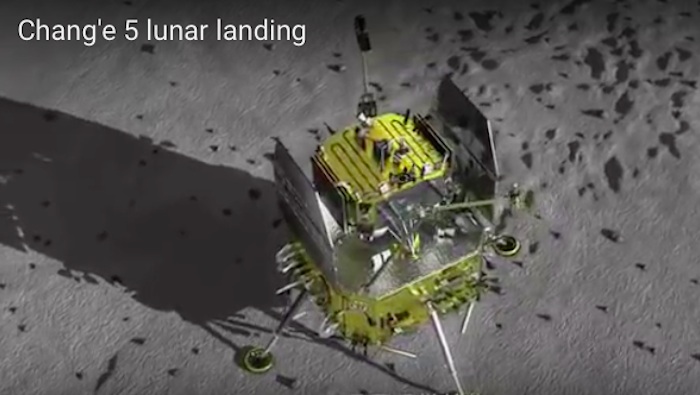 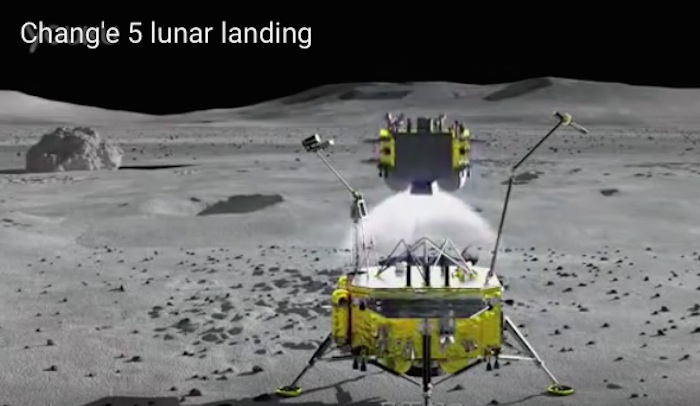 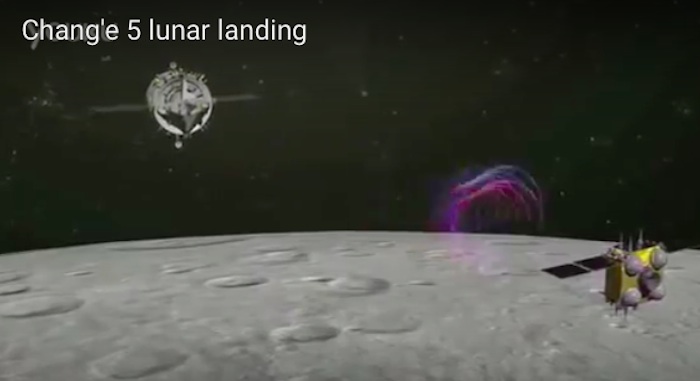 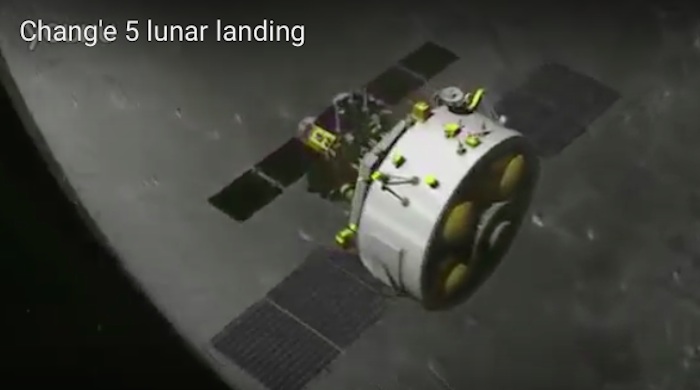 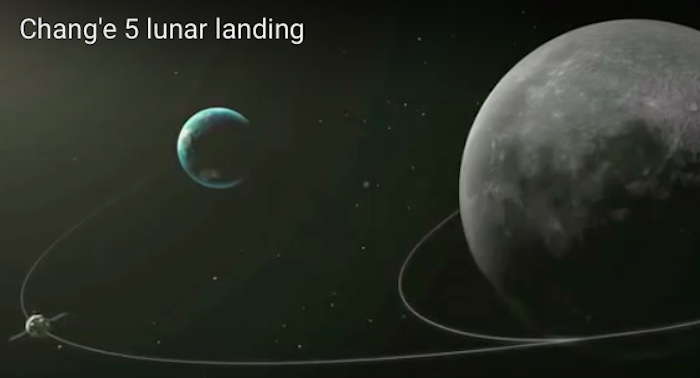 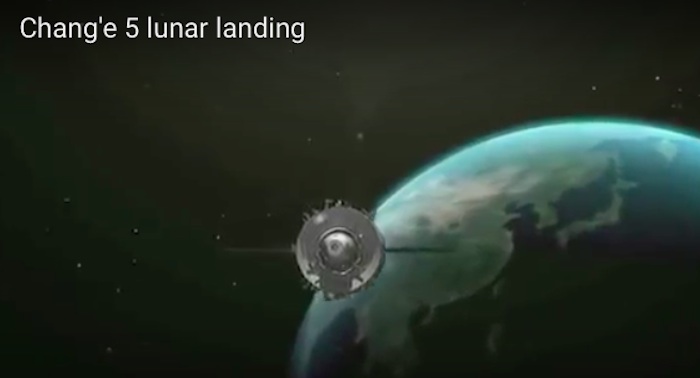 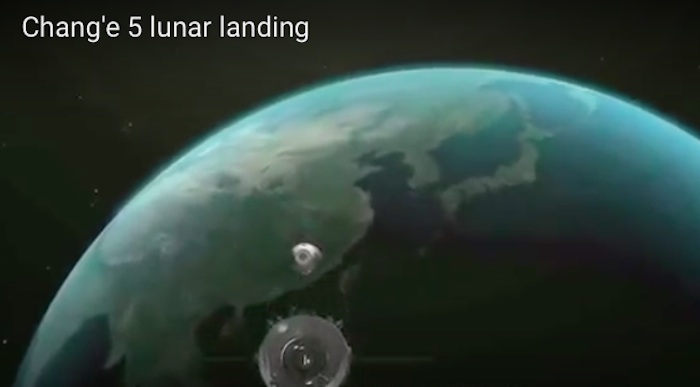 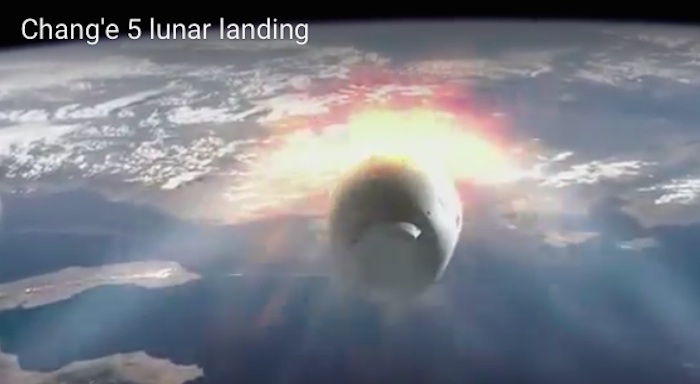 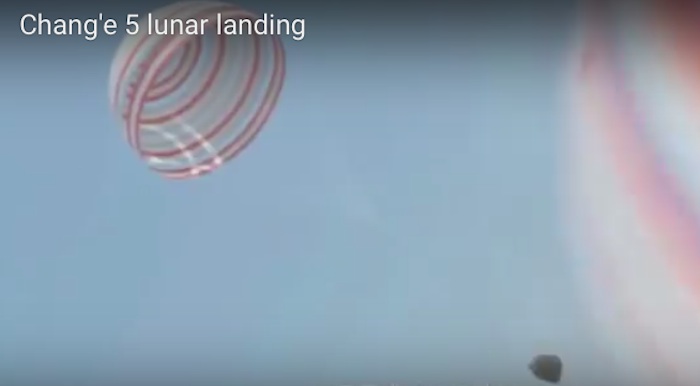 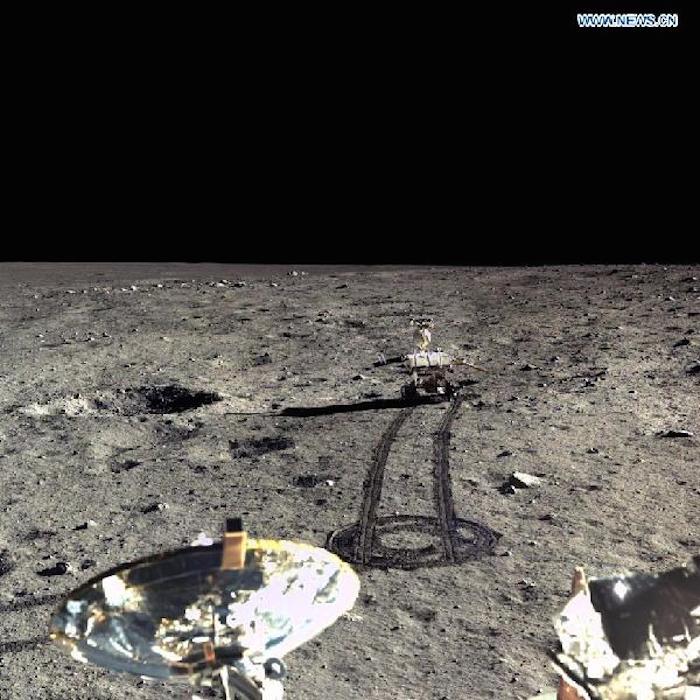 BEIJING, April 24, 2016 (Xinhua) -- Photo provided by National Astronomical Observatories of Chinese Academy of Sciences shows a high-resolution image of lunar surface on the moon. The image is shot by Chinese Chang'e 3, an unmanned lunar exploration probe, and Yutu rover.
-
BEIJING, May 26 China will send lunar probe Chang'e 5 to land on the moon and return with lunar samples in the second half of 2017, according to State Administration of Science, Technology and Industry for National Defense (SASTIND) on Friday.
It will be the first time a Chinese probe to land on the moon, collect samples and return to Earth, and the third stage of China's lunar exploration endeavor, said the SASTIND.
The first stage of lunar expedition was achieved by sending Chang'e 1, a circumlunar satellite, in 2007. China landed its first lunar probe Chang'e 3 on the surface of the moon in 2013.
China is also planning to be the first country to land on the far side of the moon. That mission will be carried out by Chang'e-4, a backup for Chang'e-3, and is due to be launched in 2018, according to SASTIND.
China plans to orbit Mars, land and deploy a rover around 2020.
The country will also unveil a new generation of carrier rockets including Long March 5 and 7 in 2016, along with other new satellites and spacelabs.
Quelle: Xinhua
-
Update: 23.12.2016
.
Erforschung des Mondes einen Schritt weiter mit Chang-e V in voller Größe... 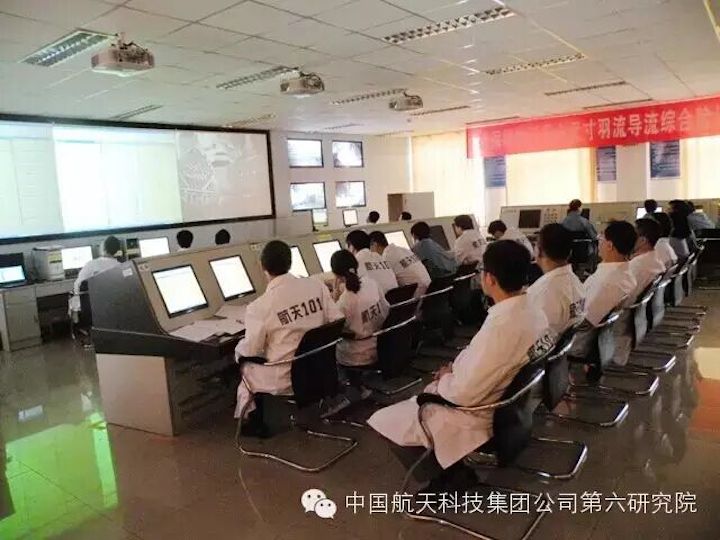 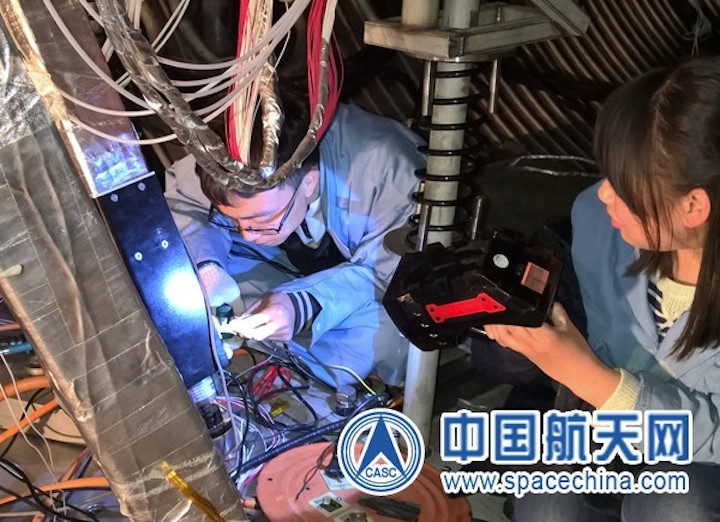 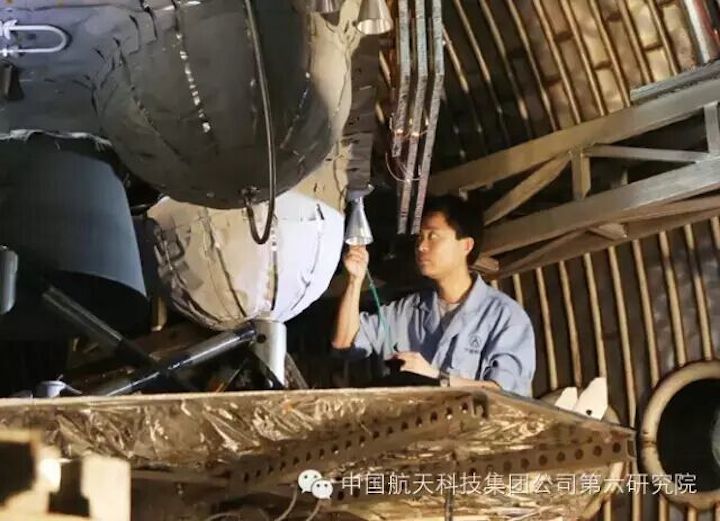 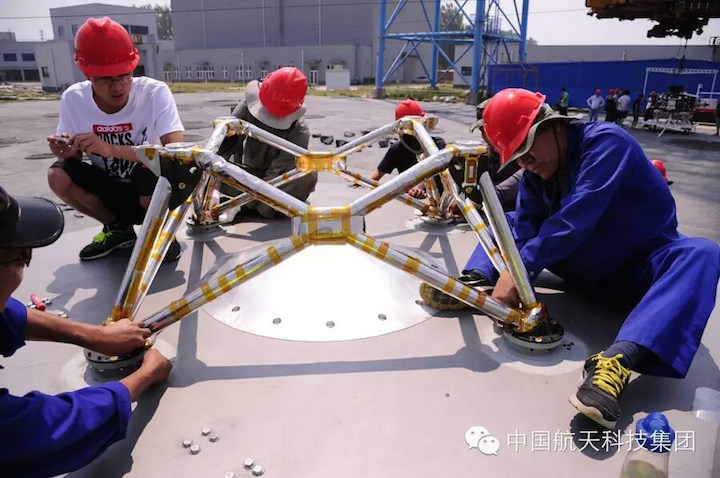 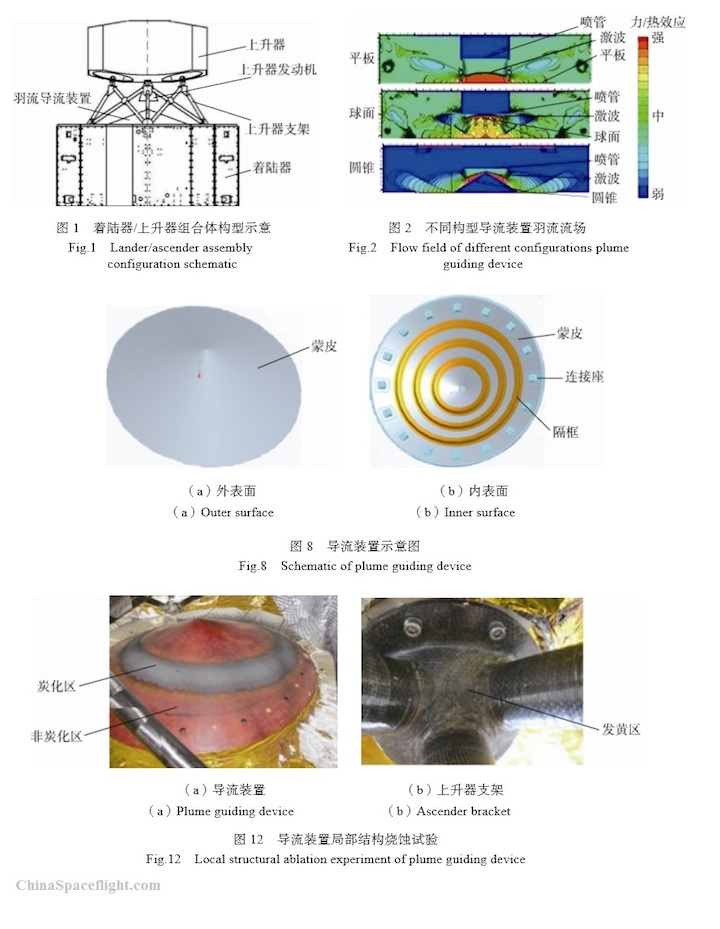 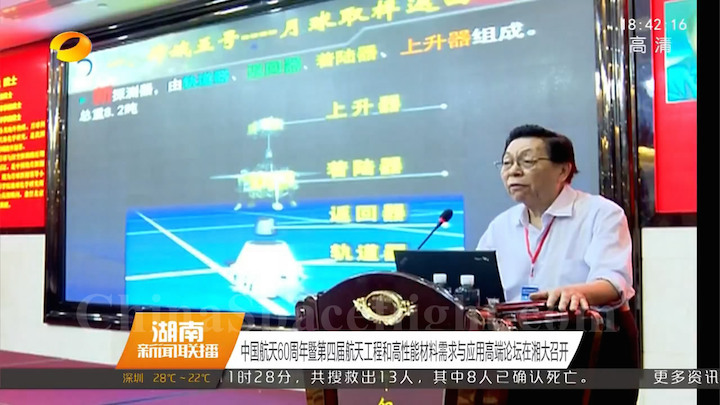 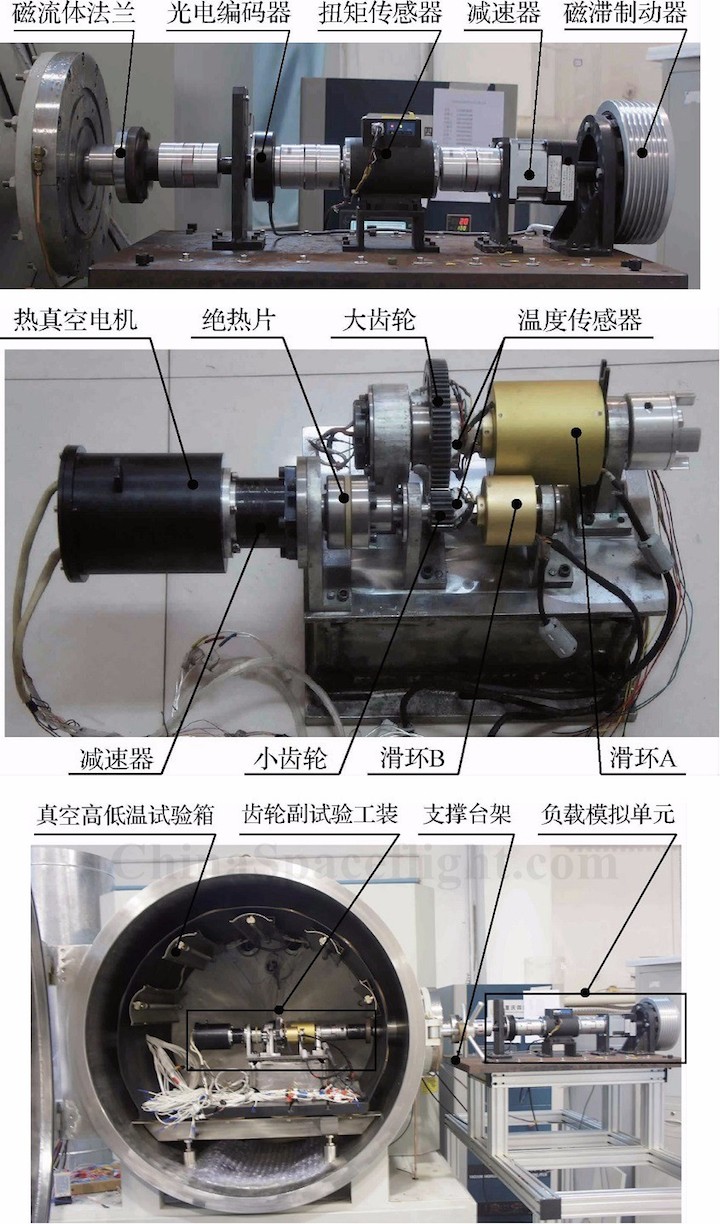 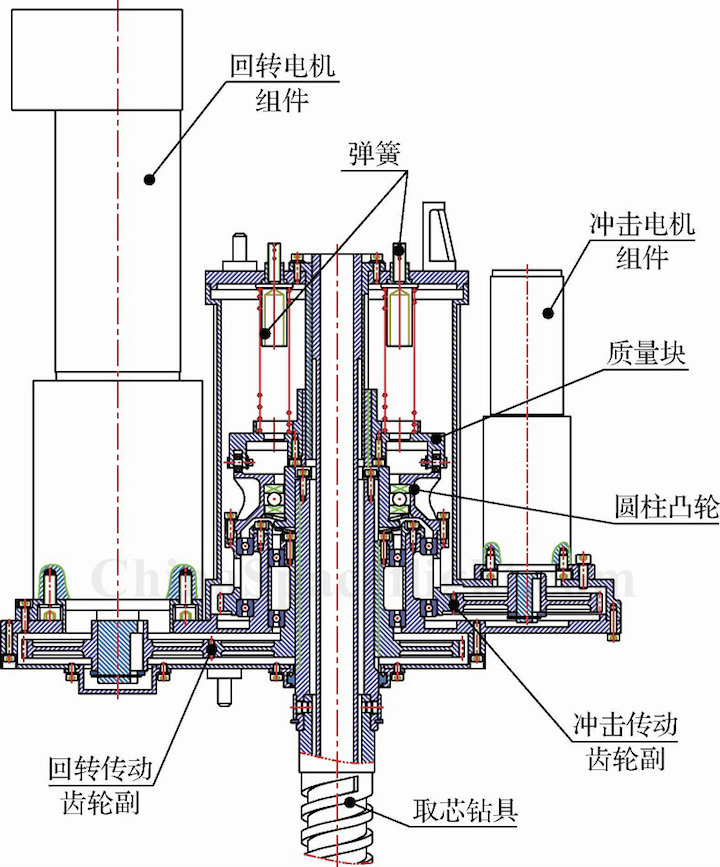 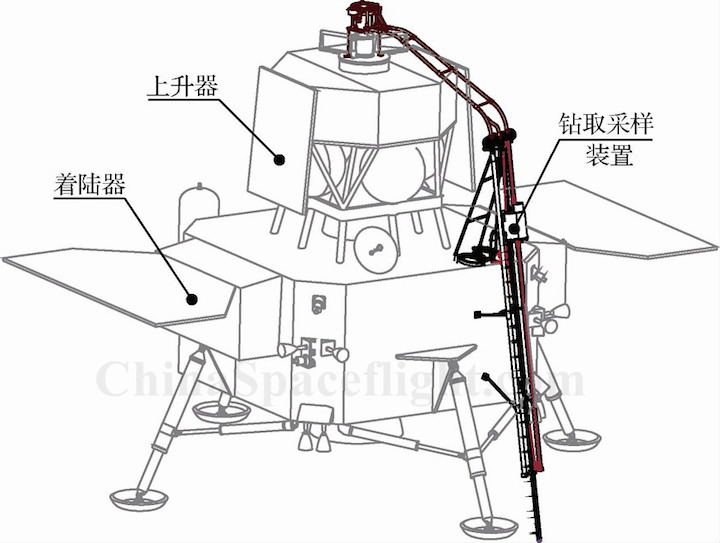 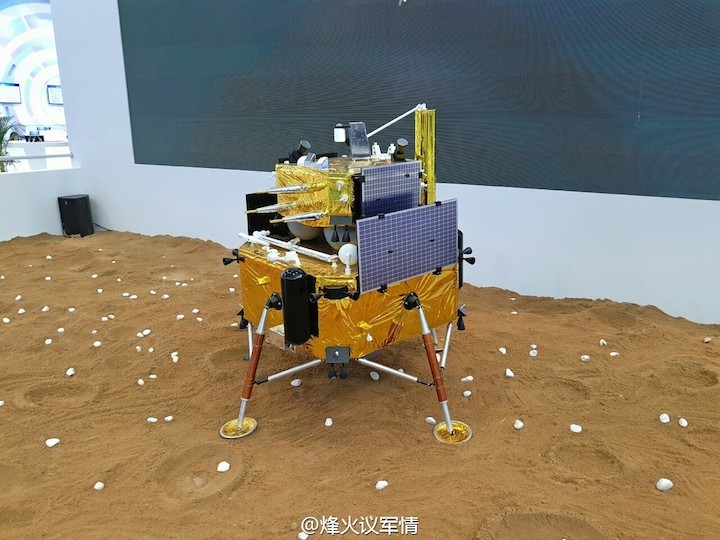 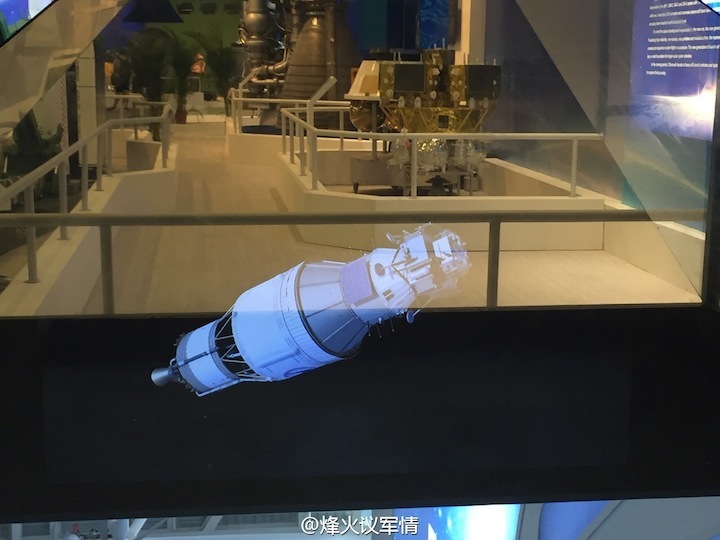 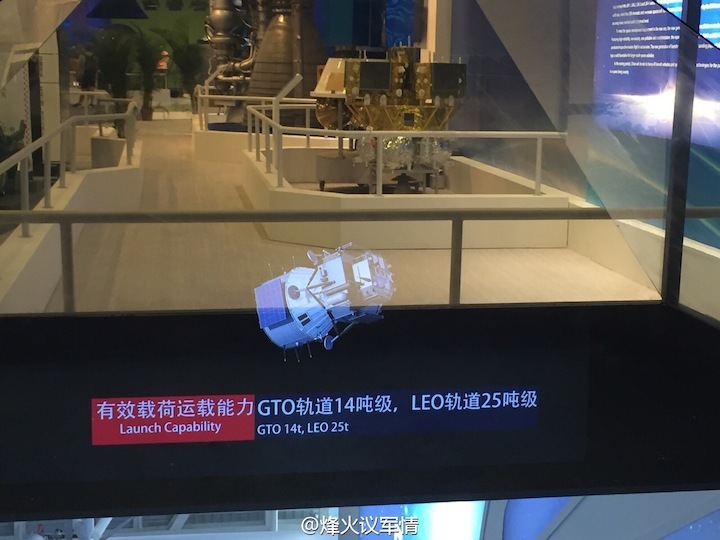 Scientists in China are engaged in intense preparations for the launch of the Chang'e-5 lunar probe in the second half of 2017, state media report.

The complex mission will involve a number of stages and components that will combine to land on and collect samples from the Moon, before ascending, a docking in lunar orbit, and heading home.

A new report by China Central Television (CCTV) shows work on the lander, ascent stage and re-entry vehicle needed for a successful mission.

“The lander and ascender form a combination that will land on the moon to conduct unmanned sample collection mission,” Ruan Jianhua, deputy chief designer of Chang’e-5, told CCTV, with the samples taken back to Earth by the re-entry capsule.

Above: The Chang'e-5 reentry capsule (Framegrab/CCTV).

After landing at Siziwang Banner, Inner Mongolia - the same area where China's crewed Shenzhou missions touch down - the samples will be taken to laboratories.

"Once the samples are back, we can begin our analysis right away." Ouyang Ziyuan, a cosmochemist and chief scientist of China's Lunar Exploration Project (CLEP), told press in October.

Chang’e-5 marks the third phase of a Chinese project to first orbit, then land and rove, and finally retrieve samples from the surface of the Moon.

Chang'e-1 and -2 first orbited and mapped the Moon in 2007 and 2010 respectively, before the Chang'e-3 soft landed in December 2013, setting a lander and the Yutu, or Jade Rabbit, rover on the surface.

The sample return phase is now made possible by the successful development of the Long March 5 heavy-lift carrier rocket, which debuted (dramatically) in November.

The landing site for Chang’e-5 has apparently been chosen and imaged, but coordinates have not been released.

Above: Image of the apparent planned landing spot for Chang'e-5 (Chinese Academy of Sciences).

From the Moon to Mars and beyond

The mission will be the first to collect samples from the Moon since the early 1970s, when US crewed and Soviet Union robotic missions gathered and returned lunar materials.

While marking the culmination of China’s first lunar exploration project, Chang’e-5 will, as well as testing necessary techniques for potential future crewed missions, provide experience for missions beyond the Earth-Moon system.

“We will later conduct research of Mars and other asteroids. We expect to go further in the exploration of deep space,” Ruan says.

Chinese robotic activity on the Moon will not end with Chang’e-5, however. In 2018 China will attempt the first ever landing on the lunar far side with Chang’e-4, using the back-up lander and rover for the ongoing Chang’e-3 mission, and a relay satellite positioned beyond the Moon to facilitate communications.

Above: A view of the far side of the Moon and the distant Earth, captured by the service module for the 2014 Chang’e 5-T1 mission (Chinese Academy of Sciences).

Due to ‘tidal locking’, the far side of the Moon remains permanently facing away from the Earth, with images showing a distinctly different surface to the near side, including a huge, scientifically intriguing impact zone, the South Pole-Aitken basin, which the Chang’e-4 is expected to target.

Chang’e-6 could, potentially by around 2020, combine these missions to attempt a sample return from the lunar far side.

Other Chinese missions being researched include robotic missions to the Moon’s poles in the early 2020s.

Renewed focus on the Moon

China is not the only country interested in exploring our celestial neighbour. India is developing its first landing and roving mission, Chandrayaan-2, while Japan's JAXA could launch two missions before the end of the decade.

NASA is working on a range of missions to launch in the coming years, including Lunar Flashlight, a cubesat orbiter to investigate ice deposits, along with three other small Moon-bound payloads as part of the first test of the Space Launch System.

A host of private entities are also competing for the $30 million Lunar XPrize, sponsored by Google, with four teams from Israel (SpaceIL), the US (Moon Express), India (Team Indus) and an international consortium (Synergy Moon) earning launch contracts for 2017 in a race to operate a rover on the Moon.