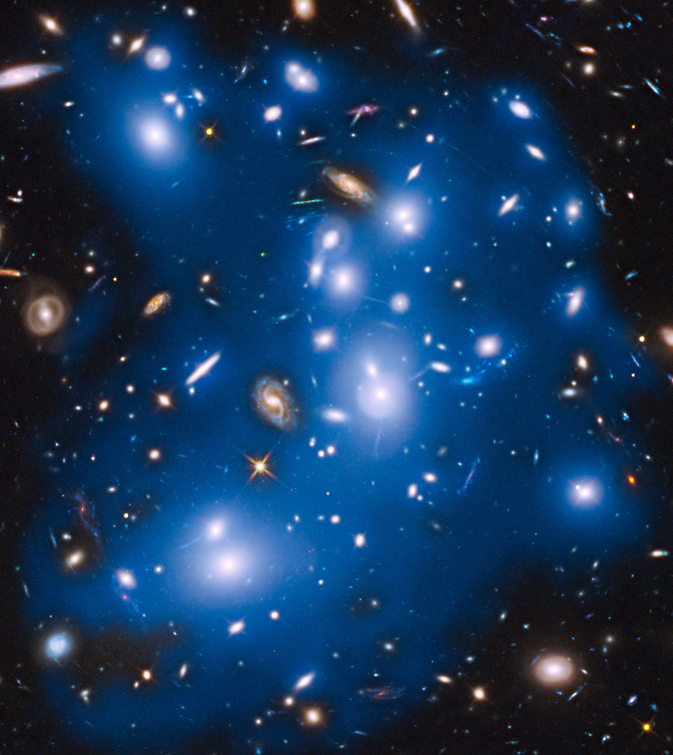 Massive galaxy cluster Abell 2744, nicknamed Pandora's Cluster, takes on a ghostly look where total starlight has been artificially colored blue in this Hubble view.
Image Credit: NASA/ESA/IAC/HFF Team, STScI
.
NASA’s Hubble Space Telescope has picked up the faint, ghostly glow of stars ejected from ancient galaxies that were gravitationally ripped apart several billion years ago. The mayhem happened 4 billion light-years away, inside an immense collection of nearly 500 galaxies nicknamed “Pandora’s Cluster,” also known as Abell 2744.
The scattered stars are no longer bound to any one galaxy, and drift freely between galaxies in the cluster. By observing the light from the orphaned stars, Hubble astronomers have assembled forensic evidence that suggests as many as six galaxies were torn to pieces inside the cluster over a stretch of 6 billion years.
Computer modeling of the gravitational dynamics among galaxies in a cluster suggests that galaxies as big as our Milky Way Galaxy are the likely candidates as the source of the stars. The doomed galaxies would have been pulled apart like taffy if they plunged through the center of a galaxy cluster where gravitational tidal forces are strongest. Astronomers have long hypothesized that the light from scattered stars should be detectable after such galaxies are disassembled. However, the predicted “intracluster” glow of stars is very faint and was therefore a challenge to identify.
“The Hubble data revealing the ghost light are important steps forward in understanding the evolution of galaxy clusters,” said Ignacio Trujillo of The Instituto de Astrofísica de Canarias (IAC), Santa Cruz de Tenerife, Spain. “It is also amazingly beautiful in that we found the telltale glow by utilizing Hubble’s unique capabilities.”
The team estimates that the combined light of about 200 billion outcast stars contributes approximately 10 percent of the cluster’s brightness.
“The results are in good agreement with what has been predicted to happen inside massive galaxy clusters,” said Mireia Montes of the IAC, lead author of the paper published in the Oct. 1 issue of the Astrophysical Journal.
Because these extremely faint stars are brightest at near-infrared wavelengths of light, the team emphasized that this type of observation could only be accomplished with Hubble’s infrared sensitivity to extraordinarily dim light.
Hubble measurements determined that the phantom stars are rich in heavier elements like oxygen, carbon, and nitrogen. This means the scattered stars must be second or third-generation stars enriched with the elements forged in the hearts of the universe’s first-generation stars. Spiral galaxies – like the ones believed to be torn apart -- can sustain ongoing star formation that creates chemically-enriched stars.
Weighing more than 4 trillion solar masses, Abell 2744 is a target in the Frontier Fields program. This ambitious three-year effort teams Hubble and NASA’s other Great Observatories to look at select massive galaxy clusters to help astronomers probe the remote universe. Galaxy clusters are so massive that their gravity deflects light passing through them, magnifying, brightening, and distorting light in a phenomenon called gravitational lensing. Astronomers exploit this property of space to use the clusters as a zoom lens to magnify the images of far-more-distant galaxies that otherwise would be too faint to be seen.
Montes’ team used the Hubble data to probe the environment of the foreground cluster itself. There are five other Frontier Fields clusters in the program, and the team plans to look for the eerie “ghost light” in these clusters, too.
The Hubble Space Telescope is a project of international cooperation between NASA and the European Space Agency. NASA's Goddard Space Flight Center in Greenbelt, Maryland, manages the telescope. The Space Telescope Science Institute (STScI) in Baltimore conducts Hubble science operations. STScI is operated for NASA by the Association of Universities for Research in Astronomy, Inc., in Washington.
Quelle: NASA
Astronomie
« Zum vorherigen Eintrag Zum nächsten Eintrag »
2863 Views
Created with page4