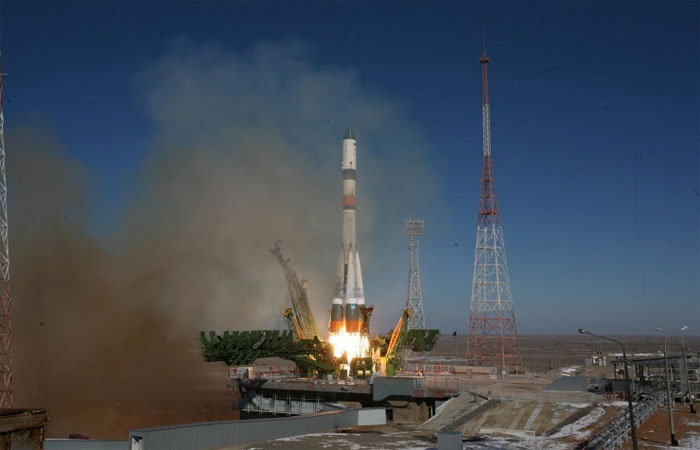 A Russian Soyuz-2.1a carrier rocket with a Fregat upper stage and a Meridian communications satellite has been successfully launched from the Plesetsk space port, Colonel Alexei Zolotukhin, a spokesman for the Russian airspace defence forces, told TASS early on Thursday.

“The airspace defence forces’ operational unit successfully launched the Soyuz-2.1a medium-class carrier rocket with a Meridian communications satellite from the Plesetsk cosmodrome at 04:43 Moscow time,” he said, adding that the rocket had been blasted off in a regular regime.
The Fregat upper stage with a Meridian dual-use communications satellite has separated from the third stage of the Soyuz-2.1a carrier rocket, Colonel Alexei Zolotukhin, a spokesman for the Russian airspace defence forces, told TASS early on Thursday.
The Fregat upper stage will continue its mission to put the satellite onto its designated orbit.
The Meridian dual-use satellite is tasked to ensure communication with sea vessels and ice patrol aircraft along the Northern Sea Route.
Flight tests of the Soyuz-2 spacecraft were kicked off at Plesetsk in November 2004. Over the ten years since then, as many as 18 Soyuz-2 carrier rockets of various modifications - 1a, 1b, and 1v - have been launched.
Rockets of the Soyuz-2 series replaced Soyuz-U launch vehicles used at Plesetsk from 1973 to 2012. Over this period, a total of 434 Soyuz-U boosters were launched to put into orbit about 430 spacecraft.
The Soyuz-2.1a carrier rocket was developed by the Progress Rocket and Space Centre. It is equipped with upgraded digital control and radio-telemetric systems and unrated engines of the first and second stages.
Quelle:TASS
Raumfahrt
« Zum vorherigen Eintrag Zum nächsten Eintrag »
2901 Views
Created with page4