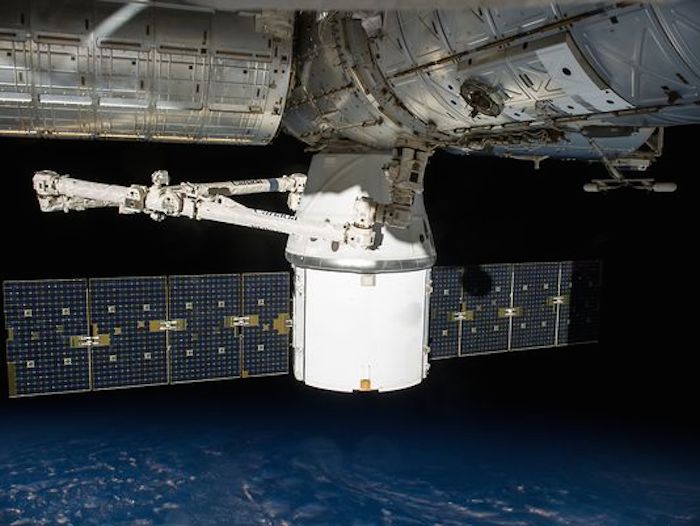 Heavy seas have delayed a SpaceX Dragon capsule's return home from space this week.
Instead of on Tuesday, the unmanned cargo craft's departure from the International Space Station is now planned just before 10 a.m. Saturday, setting up a splashdown less than six hours later in the Pacific Ocean west of Baja California.
A deorbit burn is expected at 2:43 p.m., followed by a parachute-assisted splashdown around 3:39 p.m.
The Dragon will re-enter the atmosphere carrying nearly 3,300 pounds of equipment and science experiments. It's the only spacecraft flying today that can return large amounts of cargo to Earth.
SpaceX launched the Dragon Sept. 21 from Cape Canaveral and it docked at the station two days later.
The mission is the company's fourth of a dozen under a $1.6 billion NASA resupply contract.
Quelle: Florida Today
.
Update: 25.10.2014
.
Critical NASA Science Returns to Earth aboard SpaceX Dragon Spacecraft 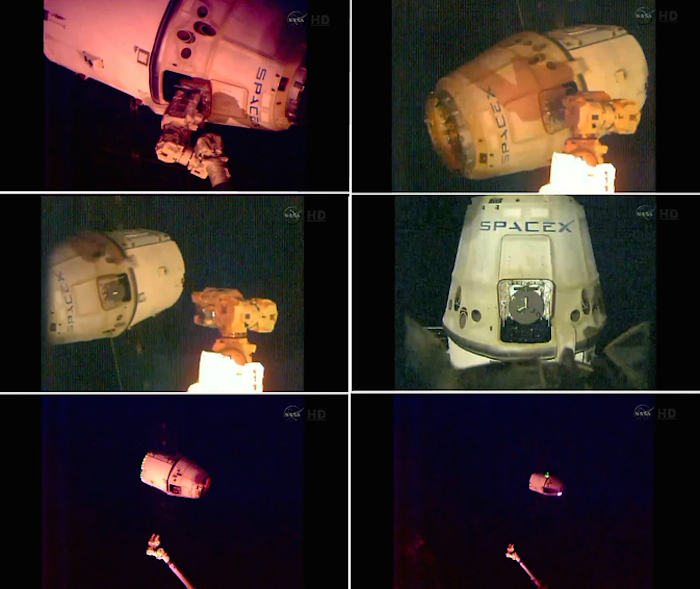 This series of images, captured by cameras on the International Space Station (ISS) show the departure from the station of SpaceX's Dragon cargo spacecraft.
Image Credit: NASA
.

SpaceX's Dragon cargo spacecraft splashed down at 3:39 p.m. EDT Saturday, Oct. 25, in the Pacific Ocean, approximately 300 miles west of Baja California, returning 3,276 pounds of NASA cargo and science samples from the International Space Station (ISS).
A boat will take the Dragon spacecraft to a port near Los Angeles, where some cargo will be removed and returned to NASA within 48 hours. Dragon will be prepared for a return journey to SpaceX's test facility in McGregor, Texas, for processing.
“This mission enabled research critical to achieving NASA’s goal of long-duration human spaceflight in deep space,” said Sam Scimemi, director of the International Space Station division at NASA Headquarters. “The delivery of the ISS RapidScatterometer advances our understanding of Earth science, and the 3-D printer will enable a critical technology demonstration. Investigations in the returned cargo could aid in the development of more efficient solar cells and semiconductor-based electronics, the development of plants better suited for space, and improvements in sustainable agriculture.”
Among the returned investigations was part of the Rodent Research-1 experiment, which also launched last month to space aboard this Dragon. This study supports ongoing research into how microgravity affects animals, providing information relevant to human spaceflight, discoveries in basic biology, and knowledge that may direct affect human health on Earth. NASA and the Center for the Advancement of Science in Space (CASIS) are developing spaceflight experiments that will use the Rodent Research Hardware System.
When returned, data from the Fundamental and Applied Studies of Emulsion Stability (FASES) investigation will be processed to help determine the physical principles which play a part in stabilizing different emulsions and the compounds that influenced those emulsions while in orbit. Emulsions are mixtures of two or more liquids where one liquid is present in droplet form and distributed throughout the other liquid; common emulsions include milk, mayonnaise and paint.
NanoRacks-Girl Scouts of Hawai’i-Arugula Plant Growth study was returned to Earth, as well. This study seeks to determine the impact that various nutrients and microgravity have on the growth and nutritious value of arugula seedlings grown in space. The goal of the study is to develop better ways to grow plants with a high nutritional content in the space environment. If the study samples have a high nutrition value, this may enable NASA and astronauts to grow and consume fresh, healthy food during future space travel.
Dragon is the only space station resupply spacecraft able to return a significant amount of cargo to Earth. The spacecraft lifted off from Cape Canaveral Air Force Station in Florida on Sept. 21 carrying almost 5,000 pounds of supplies and elements to support 255 scientific investigations the crew members of Expeditions 41 and 42 will conduct. The mission was the fourth of 12 cargo resupply trips SpaceX will make to the space station through 2016 under NASA's Commercial Resupply Services contract.
Quelle: NASA
.
Update: 26.10.2014
. 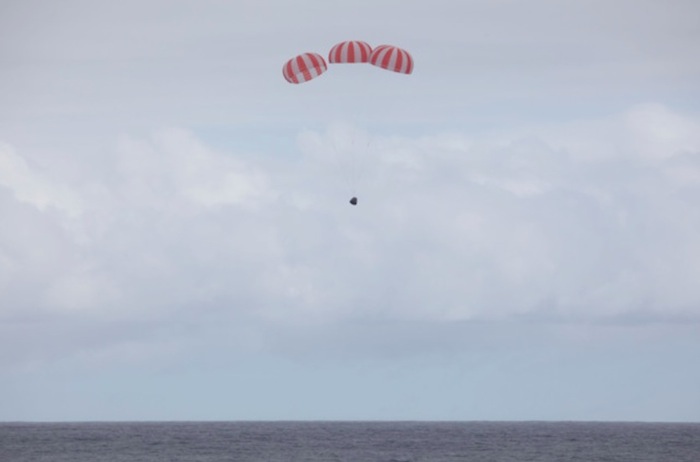 A SpaceX Dragon capsule splashed down in the Pacific Ocean today to complete a five-week resupply mission to the International Space Station that launched last month from Cape Canaveral.
"Splashdown is confirmed!" SpaceX reported on Twitter.
The official time was 3:39 p.m. EDT.
The Dragon returned home with nearly 3,300 pounds of equipment and science experiment samples. No other spacecraft flying today can return as much cargo to Earth.
The capsule launched Sept. 21 from Cape Canaveral Air Force Station on a Falcon 9 rocket, starting SpaceX's fourth of 12 resupply missions under a $1.6 billion NASA contract.
The spacecraft berthed two days later, safely delivering the first 3-D printer in space, a mouse habitat and an instrument that will improve hurricane forecasts with measurements of ocean surface winds, among other cargo.
This morning, Expedition 41 astronauts Reid Wiseman and Butch Wilmore released the Dragon from the station's robotic arm just before 10 a.m. to begin its journey home.
. 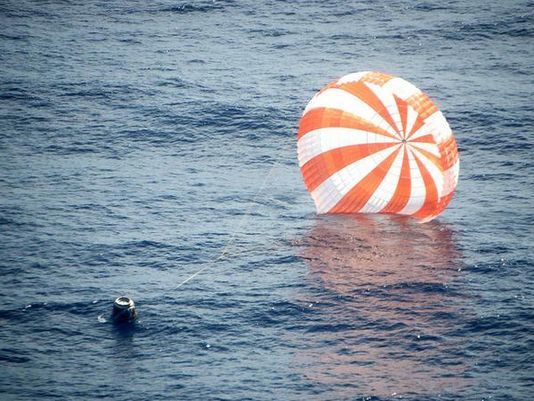 The Dragon was targeting a splashdown about 265 miles west of the Baja peninsula.
From there, NASA said a boat would ferry the Dragon to a port near Los Angeles for offloading of some time-sensitive cargo within 48 hours, and it would continue on to SpaceX's test facility in McGregor, Texas, for processing.
The station's next commercial cargo delivery is scheduled to launch at 6:45 p.m. Monday from Virginia's Eastern Shore, featuring an Orbital Sciences Corp. Antares rocket and Cygnus spacecraft.
SpaceX's next Dragon launch from Cape Canaveral is targeted for no earlier than Dec. 9.
Quelle: Florida Today
.
Update: 27.10.2014
.
SpaceX Spacecraft Splashdown, Starring Space Station Science
. 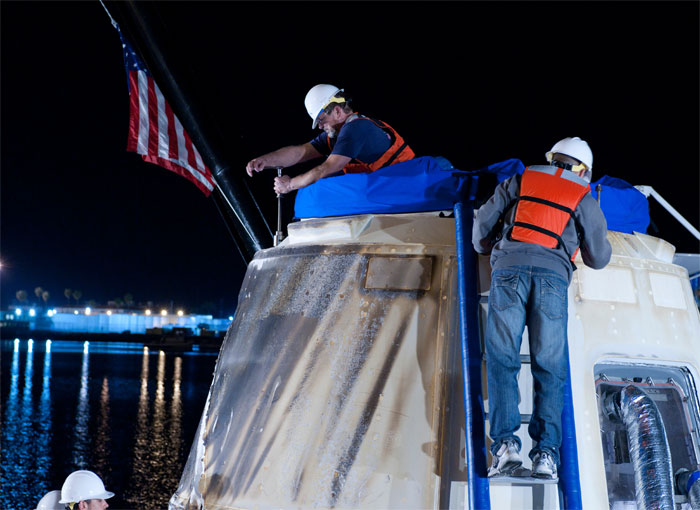 The return of the SpaceX Dragon brings with it plant samples, data that may impact your facial cream composition and validation of a new way of creating on Earth crystals that are used in our daily electronic devices. This completes the company’s fourth contracted resupply mission to the International Space Station. The Dragon carries with it research hardware; samples and data from biology, biotechnology, physical science and human research; and technology development and demonstration studies.
Because a variety of plant studies are ongoing aboard the space station, it’s natural that samples from several investigations involving plants are returning aboard the Dragon spacecraft. The Plant Gravity Sensing 1 study examines the cellular process of formation in thale cress, or Arabidopsis thaliana, a small flowering plant related to cabbage. Its genetic makeup is simple and well-understood by the plant biology community. This knowledge offers easy recognition of any changes that occur as a result of microgravity adaptation.
In this study of thale cress, researchers examined the mechanisms of the plant that determine its growth direction up or down -- its gravity sensor -- in the absence of gravity. The research team analyzed the role of a specific type of protein, MCA1, in the plant’s gravity sensor. These types of studies help scientists understand plant growth mechanisms in microgravity to be better able to cultivate plants for food on future spaceflights or possibly on other planets.
This study also helps researchers prove their hypothesis that it may be possible to modify a plant’s gravity sensor on Earth. If the gravity sensors of plants could be modified, their ability to withstand heavy winds and rain may improve. This could potentially result in a higher crop output from farms. Furthermore, understanding the cellular processes in plant development may translate to better knowledge of cellular processes in the human body. As a result, medical science research teams may gain a better understanding of mechanisms of diseases affected by gravity, such as osteoporosis and muscle loss.
The second plant study with samples returning to Earth, NanoRacks-Girl Scouts of Hawai’i-Arugula Plant Growth, seeks to determine the impact that various nutrients and microgravity have on the growth and nutritious value of arugula seedlings that sprouted in space. The goal of the study is to develop better ways to grow plants with a high nutritional content in the space environment. If the study samples have a high nutrition value, this may enable NASA and astronauts to produce and consume fresh, healthy food during future space travel.
A team of eight Girl Scouts in Hawai’i conceived this plant study of arugula seedlings, adding experience in research design, decision-making and project management to their repertoire. They came up with this idea to not only contribute to scientific knowledge of growing plants in space but also to examine possibilities to help create sustainable growing practices in Hawai’i. Their goal is that findings from the study of arugula seedlings grown in space may lead to new agricultural production methods that use less fertilizer while producing crops with high nutritional value.
Plants, microbes and animals are often used as model organisms in research both on the ground and in the orbiting laboratory. Model organisms are well-understood, non-human species with characteristics that allow them easily to be maintained, reproduced and studied in a laboratory.
In addition to the plant samples, tissue samples from mice flown to the space station as part of the Rodent Research-1 (CASIS) investigation also will return on the Dragon spacecraft. This study supports ongoing research into how microgravity affects animals, providing information relevant to human spaceflight, discoveries in basic biology and knowledge that may have direct impact toward human health on Earth.
Data from the Fundamental and Applied Studies of Emulsion Stability (FASES) investigation, also returning, will be processed on the ground. The goal is to help determine the physical principles playing a part in stabilizing different emulsions and the compounds that influenced those emulsions while in orbit. Emulsions are mixtures of two or more liquids where one liquid is present in droplet form and distributed throughout the other liquid. Common emulsions on Earth include milk, mayonnaise and paint. For example, milk is an emulsion of fat droplets in a liquefied solution.
Results from FASES may have implications in improving fluid handling processes in space systems that involve emulsions. Researchers and industry scientists can use the study data to understand which compounds work best to stabilize or destabilize an emulsion. On Earth, this could optimize design of applications of emulsions such as paints, lotions and creams and may help create greener, less synthetic products.
Returned samples from a materials science investigation, Growth of Homogeneous Silicon-Germanium (SiGe) Crystals in Microgravity by the TLZ Method (Hicari), will help researchers evaluate a new crystal growth method called the Traveling Liquidous Zone method. The Japan Aerospace Exploration Agency came up with this method to create homogeneous semiconductor alloy crystal growth.
Homogeneous SiGe crystals grown in microgravity provide basic data for growing large, high quality crystals. Scientists may use the Hicari data to grow large, homogeneous alloy crystals on the ground. SiGe crystals may be used in electronic devices and also in other applications to create more efficient solar cells.
And finally, the first Egyptian protein crystal growth study conducted aboard the space station, NanoRacks-Egypt Against Hepatitis C Virus Microgravity Protein Crystal Growth (NanoRacks-EGAHEP), also returns on Dragon. Hepatitis C is a contagious liver disease highly prevalent in Egypt that can be mild, lasting weeks, or serious and become a long-term illness. Researchers use protein crystal growth studies to determine and understand the structure of proteins. This study in microgravity looks at the proteins that make up the hepatitis C virus to understand how the virus replicates. This knowledge may lead to new methods for treatment of viral infections like hepatitis C.
With so many Earth applications anticipated from these investigation results, as well as implications for long-duration spaceflight, the Dragon spacecraft provides an important role in transporting precious research cargo back to Earth.
Quelle: NASA