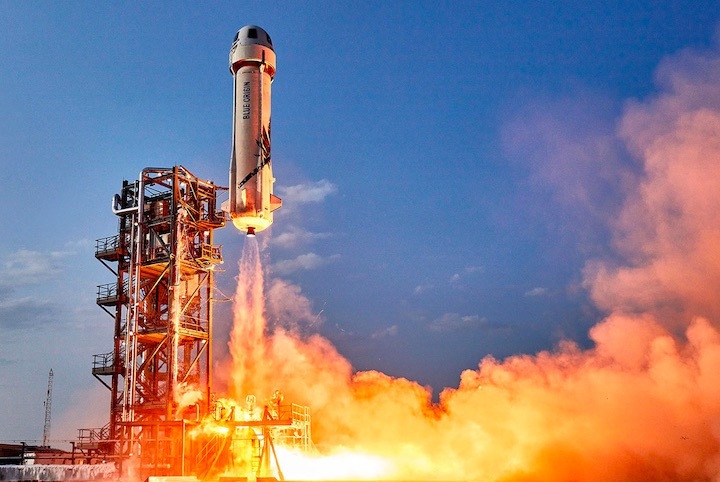 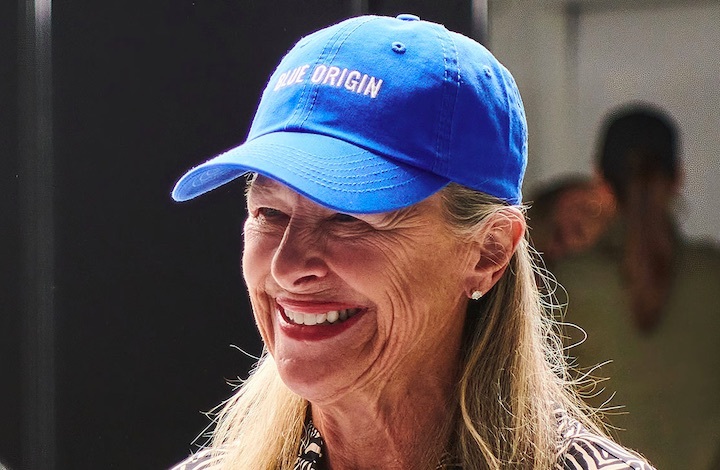 Laura Shepard Churchley, the eldest daughter of the first American in space Alan Shepard, is seen wearing a Blue Origin cap at the first human flight of the company's New Shepard launch vehicle in July 2021. Churchley is set to follow in her father's footsteps, flying on Blue Origin's third crewed flight in December. (Blue Origin)

Sixty years after watching her father launch on the first American spaceflight, Laura Shepard Churchley is ready to follow in his footsteps.

The eldest daughter of the late Mercury astronaut Alan Shepard, Churchley has been confirmed to fly on Blue Origin's New Shepard launch vehicle as a member of its third human spaceflight and first six-person crew. Scheduled to take flight from the company's West Texas launch site on Dec. 9, the NS-19 mission will also include former professional football player and "Good Morning America" (GMA) anchor Michael Strahan, who will become the first Black person to launch aboard a suborbital spaceflight.

Churchley, now 74, was 14 years old when her father climbed aboard the Mercury capsule "Freedom 7" and lifted off on the Mercury-Redstone 3 mission on May 5, 1961. The 15-minute suborbital flight reached just over 100 nautical miles (116.5 statute miles or 187.5 km) before returning to a splashdown in the Atlantic Ocean — a moment that Churchley recalled after watching the first crewed New Shepard launch in July.

"It was a thrill," said Churchley, sharing her impressions on a webcast following the New Shepard flight. "It brought back lots of memories, especially when the parachutes came out, because I remember that on Daddy's first flight in 1961."

On board that July 2021 flight were four crew members, including Blue Origin's billionaire founder Jeff Bezos, the former chief executive officer of Amazon.com.

"For our purposes today, the thing that is most interesting about Alan Shepard is that he is the namesake for this vehicle, New Shepard, and that is because the mission profile we did today is very similar to the one that Alan flew when he became the first American in space sixty-ish years ago," Bezos said at a press conference following his own flight into space.

Launching on NS-19, Churchley will become the second, second-generation U.S. astronaut to fly into space. She is preceded only by Richard Garriott, the son of Skylab and space shuttle astronaut Owen Garriott, who funded his own trip to the International Space Station in 2008.

Unlike her father, who flew to space alone, Churchley will launch with five others on Blue Origin's first spaceflight to fill all six seats aboard the New Shepard capsule. The prior two crewed spaceflights flew with only four passengers each.

The Dec. 9 launch will mark the 19th flight of the New Shepard system, which includes a vertical take-off-and-landing booster and a crew capsule equipped with what Blue Origin describes are the largest ever windows to fly into space. Joining Churchley and the four other NS-19 crew members will be Strahan, who at 6 feet, 5 inches tall (196 cm), will become the tallest person in history to reach space.

"I have to say, there are a lot of people who look and they go, 'You know what? Billionaires spend a lot of money to go into space,' but this is bigger than that," Strahan said in an interview with Bezos after Blue Origin's first human flight. "This is not just about you trying to go to space, this is so big in terms of education and for things that are going on on this planet."

Like Churchley, Strahan attended the July launch. He helped cover the mission for GMA from Blue Origin's launch and landing site near Van Horn, Texas.

"I wouldn't have considered doing this until I saw you today. [It's] the most amazing thing I have seen in my life," Strahan told Bezos.

Strahan and Churchley are flying as guests of Blue Origin, like "Mercury 13" pilot Wally Funk and "Star Trek" actor William Shatner were on the first and second New Shepard crewed flights, respectively. As a crew member, Strahan will receive a stipend, which is being donated to The Boys & Girls Club.

The four paying passengers aboard NS-19 include Taylor, chairman and CEO of the space exploration firm Voyager Space and founder of the nonprofit Space for Humanity; Dick, an engineer and investor who is a volunteer pilot for Starfighters Aerospace; and the first parent-child pair to fly into space, Bess Ventures founder Lane Bess and Cameron Bess, a content creator who identifies as pansexual.

Though three paying passengers have already flown, Blue Origin has yet to disclose the price for a seat on New Shepard. The company sold its first available seat to a still-unnamed auction winner who paid $28 million but has yet to fly. The auction proceeds were donated to Blue Origin's non-profit foundation, Club for the Future, which in turn gave $1 million to each of 19 space-based charities — including the Astronaut Scholarship Foundation, which was co-founded by Alan Shepard and is led in part today by Churchley as the chair of the Board of Trustees.

Strahan will be the second retired NFL football player to launch into space, having been a defensive end for the New York Giants for 15 seasons. The first, Leland Melvin, logged more than 23 days in Earth orbit on two space shuttle missions as a NASA astronaut from 1998 to 2010.

Strahan will also be the second television news personality to fly into space after Toyohiro Akiyama, who launched to Russia's space station Mir as a correspondent for the Tokyo Broadcasting System (TBS) in 1990.

The current Guinness World Record for the tallest person in space is held by two NASA astronauts: James "Jim" Wetherbee and James "Ox" van Hoften. Both stood 6 feet, 4 inches tall (193 cm) when they lifted off on their respective space shuttle missions.

Barring any unforeseen developments before the launch on Dec. 9, the NS-19 crew will be the 35th to 40th people to launch on a suborbital spaceflight and the 604th through 609th to fly above 50 miles high (80 km), the U.S. definition of the boundary between Earth and space. 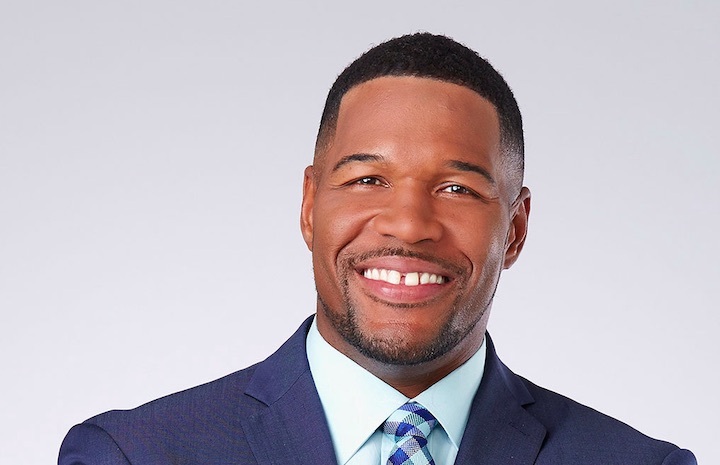 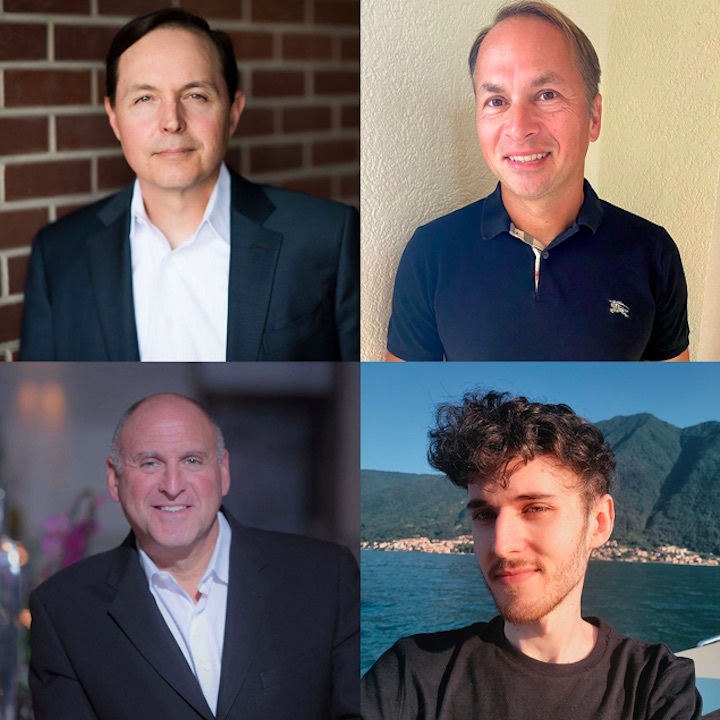