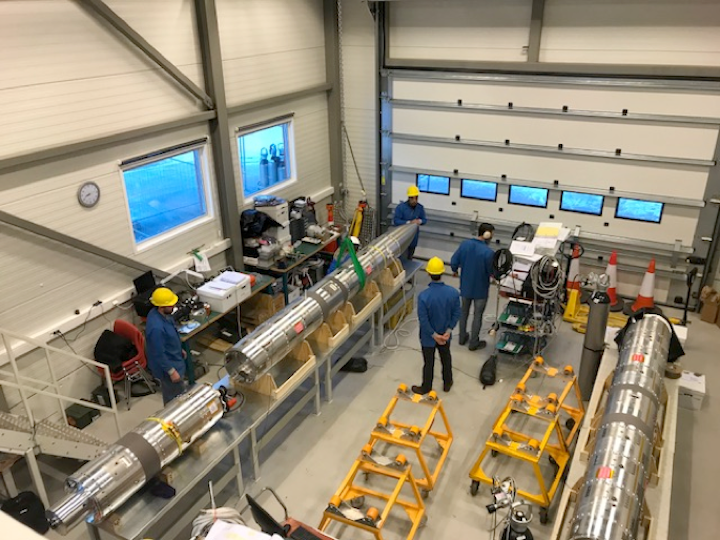 Personnel from NASA’s Wallops Flight Facility in Virginia conduct payload tests for the AZURE mission at the Andøya Space Center in Norway.

From the ground, the dance of the northern lights, or aurora borealis, can look peaceful. But those shimmering sheets of colored lights are the product of violent collisions between Earth’s atmosphere and particles from the Sun.

The beautiful lights are just the visible product of these collisions — the kinetic and thermal energy released, invisible to the naked eye, are no less important. Understanding the contribution that aurora make to the total amount of energy that enters and leaves Earth’s geospace system — referred to as auroral forcing — is one of the major goals of the NASA-funded Auroral Zone Upwelling Rocket Experiment, or AZURE. The more we learn about auroras, the more we understand about the fundamental processes that drive near-Earth space — a region that is increasingly part of the human domain, home not only to astronauts but also communications and GPS signals that can affect those of us on the ground on a daily basis.

AZURE is the first of eight sounding rocket missions launching over the next two years as part of an international collaboration of scientists known as The Grand Challenge Initiative – Cusp. These missions will launch from the Andøya and Svalbard rocket ranges in Norway to study the processes occurring inside the Earth’s polar cusp — where the planet’s magnetic field lines bend down into the atmosphere and allow particles from space to intermingle with those of Earthly origin — and nearby auroral oval, which AZURE will focus on.

AZURE will study the flow of particles in the ionosphere, the electrically charged layer of the atmosphere that acts as Earth’s interface to space, focusing specifically on the E and F regions. The E region — so-named by early radio pioneers that discovered the region was electrically charged, and so could reflect radio waves — lies between 56 to 93 miles above Earth’s surface. The F region resides just above it, between 93 to 310 miles altitude.

The E and F regions contain free electrons that have been ejected from their atoms by the energizing input of the Sun’s rays, a process called photoionization. After nightfall, without the energizing input of the Sun to keep them separated, electrons recombine with the positively charged ions they left behind, lowering the regions’ overall electron density. The daily cycle of ionization and recombination makes the E and F regions especially turbulent and complex.

AZURE will focus specifically on measuring the vertical winds in these regions, which create a tumultuous particle soup that re-distributes the energy, momentum and chemical constituents of the atmosphere.

Existing wind measurements from ground-based instruments show evidence of significant structure at scales between 6 miles and 60 miles wide in both the charged particle drifts and the neutral winds. But so far, the in-situ scientific measurements of winds have been limited to a small set of altitudes — and already those measurements don’t fit with what we would have predicted.

To better understand the forces at play, in early March the AZURE team will launch two sounding rockets near-simultaneously from the Andøya Space Center in Norway. Waiting to launch until the conditions are just right, the rockets will fly up into space, making measurements of the atmospheric density and temperature with instruments on the rockets and deploying visible tracers, trimethyl aluminum (TMA) and a barium/strontium mixture, which ionizes when exposed to sunlight.

These mixtures create colorful clouds that allow researchers to track the flow of neutral and charged particles, respectively. The tracers will be released at altitudes 71 to 155 miles high and pose no hazard to residents in the region.

By tracking the movement of these colorful clouds via ground-based photography and triangulating their moment-by-moment position in three dimensions, AZURE will provide valuable data on the vertical and horizontal flow of particles in two key regions of the ionosphere over a range of different altitudes.

Such measurements are critical if we are to truly understand the effects of the mysterious yet beautiful aurora. The results will be key to a better understanding of the effects of auroral forcing on the atmosphere, including how and where the auroral energy is deposited.