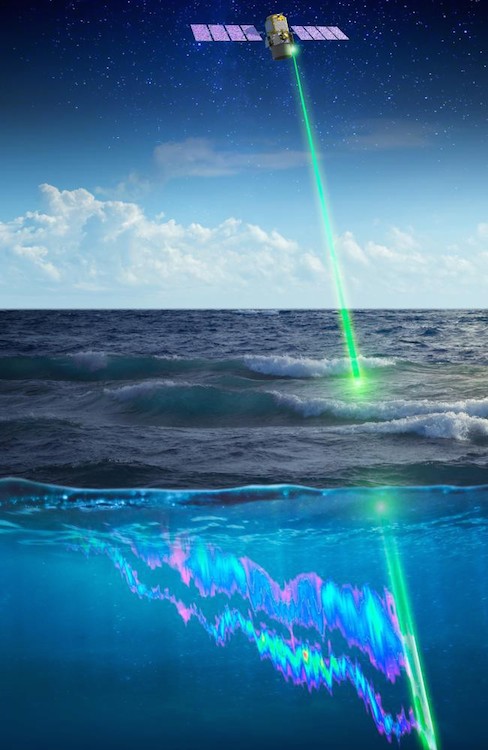 Using an enormous laser tucked into a satellite orbiting Earth, NASA scientists have been locked in intent
study of polar phytoplankton and the cycles of these tiny plants that are the foundation of coastal and oceanic food chains.

“It’s really important for us to understand what controls these boom-and-bust cycles, and how they might change in the future so we can better evaluate the implications on all other parts of the food web,” Michael Behrenfeld, a marine plankton expert at Oregon State University, stated in the release.

Before these tools were launched, in 2006, NASA could only measure the amount of plankton in the ocean by using satellites that could track the plankton when the sunlight was reflected off of ocean water. But the new LIdar system doesn't need outside sources of light to gauge the amount of plankton. And NASA has found out all kinds of stuff about phytoplankton.

Polar phytoplankton may not sound that interesting, but the microscopic marine plants play a major role in the planet's carbon cycle. Specifically, the plankton, which contains chlorophyll and floats on the upper parts of the oceans where it can catch the sunlight required to live, sucks up and absorbs a lot of the carbon dioxide that gets produced and ends up in the upper parts of the oceans.

The microalgae are also the main food source for all kinds of sea creatures, from shrimp to whales, when the ecosystem is balanced. When the ecosystem is out of whack and there are too many nutrients, the phytoplankton can grow out of control and form harmful algae blooms, like the red tide algae that has cropped up along the Gulf Coast so often in recent years, screwing up the oyster seasons and poisoning fish.

After years of observation using that huge laser (it's not like the Death Star so nothing gets destroyed, hurt or even uncomfortably tingly when the laser is used), NASA scientists concluded that even the smallest environmental changes have major effects on the amount of phytoplankton growing, and vice versa.

If phytoplankton grows too fast and outgrows the animals that eat it, the ecosystem falls out of balance, which allows large plankton blooms to spring into being. However, as soon as the plankton stops growing so fast, the animals that like to eat the nutrient-rich plankton gobble it up and everything snaps back into balance. (This goes against the traditional theory that plankton would start growing too fast on its own and then would stop growing too fast, also on its own, according to NASA.)

The study also reveals that while the year-to-year push-me-pull-you between predator (the organisms that eat phytoplankton) and prey (the phytoplankton) has been the primary driver of change in Arctic plankton stocks over the past decade, it hasn't been the only factor. The study also found that in the Southern Ocean around Antarctica, the changes in ice coverage — like, let's say, the melting of the polar ice caps, for instance — has had just as large an effect on phytoplankton growth as the balance of the food chain.

In other words, when it comes to phytoplankton, everything matters, and phytoplankton matters a lot to us, since these tiny plants suck the carbon dioxide out of the atmosphere so that Earth remains a place where we can, you know, breathe.

NASA's research is a big deal because it upends traditional theory about how phytoplankton responds to its environment. This discovery is also important since it may mark one of the last revelations NASA gets to unearth earth-science-wise before the space agency is officially in new hands with new missions and focuses.

While President Barack Obama pushed hard on Earth science studies,President-elect Donald Trump has already made clear he will be doing pretty much the exact opposite of that. So savor this new bit of information about the tiny plants that play a major role in life on Earth, because Trump's administration isn't interested in this research.