COMETWATCH 1 OCTOBER
Today's CometWatch entry is an image from Rosetta’s NAVCAM taken on 1 October 2015, at a distance of 1323 km from the nucleus of Comet 67P/Churyumov-Gerasimenko.
. 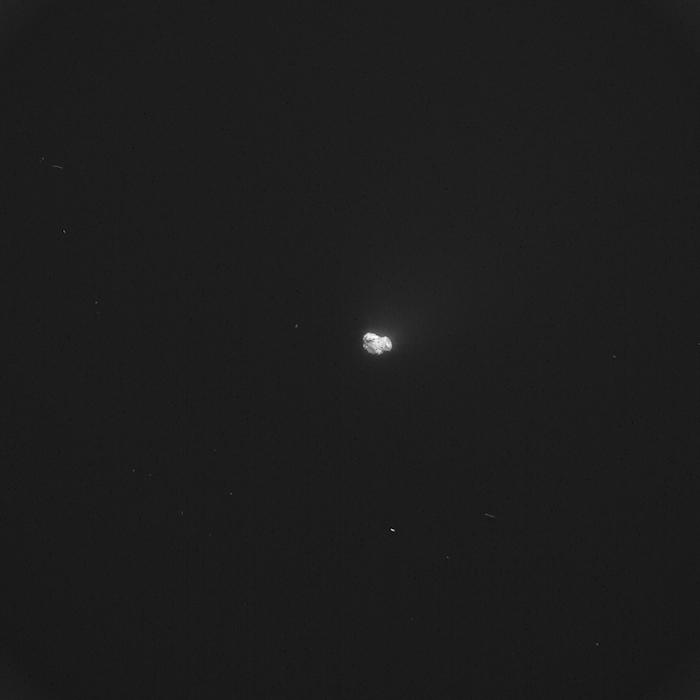 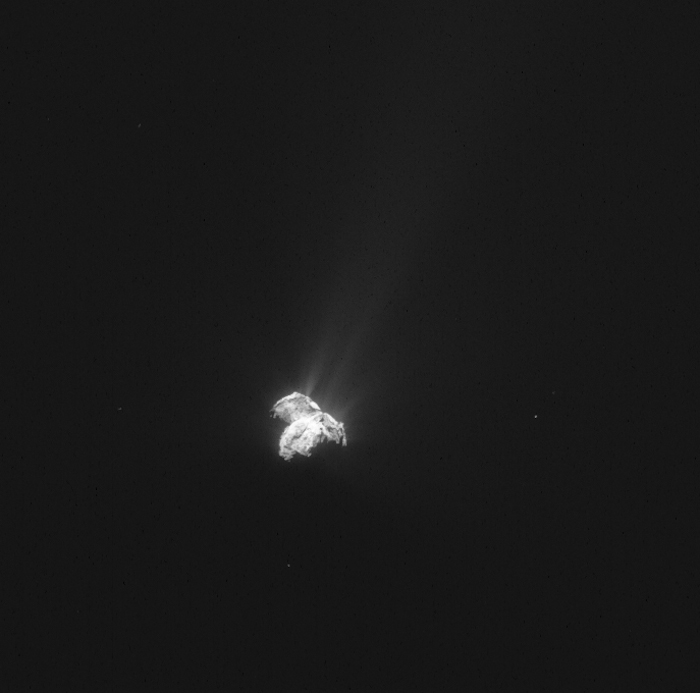 Single frame enhanced NAVCAM image of Comet 67P/C-G taken on 9 October 2015. Credits: ESA/Rosetta/NAVCAM – CC BY-SA IGO 3.0
-
In this orientation the comet’s small lobe is in the background, with primarily the Anuket region visible, and the large lobe is in the foreground with parts of Atum, Anubis and Khonsu visible.
Rosetta is currently on its return leg of a 1500 km far excursion to study the wider coma and plasma environment from afar, and is scheduled to reach a distance of 450 km from the comet by tomorrow (Saturday).
. 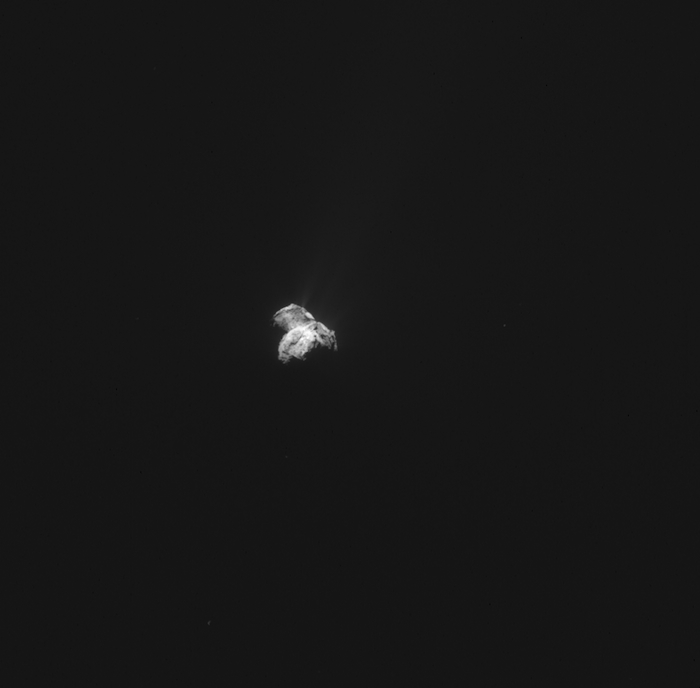 ---
COMET JET IN 3D
OSIRIS scientists have created a spectacular anaglyph view of a jet seen blasting from the nucleus of Comet 67P/Churyumov-Gerasimenko in August.
Rosetta observed increased levels of cometary activity in the weeks around perihelion as the comet made its closest approach to the Sun along its orbit, at a distance of about 186 million km – between the orbits of Earth and Mars. On the approach, the increasing solar radiation heated up the comet’s nucleus, causing its frozen ices to escape as gas and stream out into space at an ever-greater rate, dragging the comet’s dust with it.
A period of peak of activity, where distinct jets increase in number and intensity, is thus expected in the weeks around perihelion. The jet shown here is one such example of the high level of activity seen over the last months; it was witnessed on 12 August, just one day before perihelion.
. 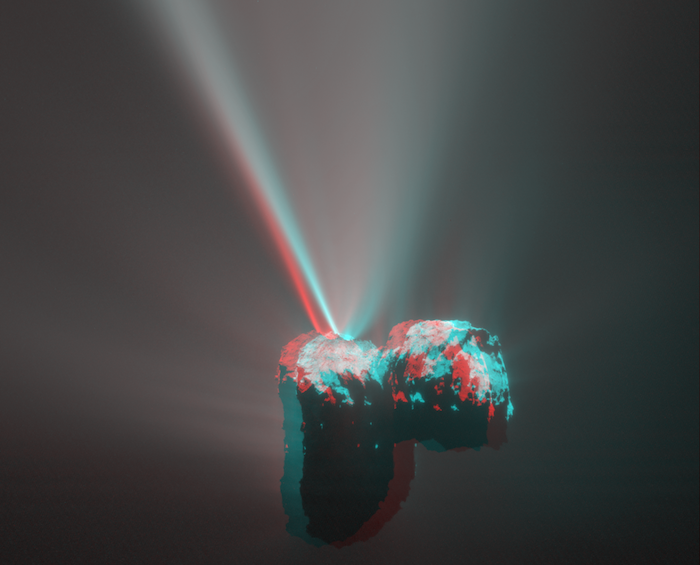 A 3D anaglyph view of Comet 67P/Churyumov-Gerasimenko based on two images acquired by Rosetta’s OSIRIS narrow angle camera on 12 August 2015, capturing a spectacular jet event. The two images are separated by 2 minutes 28 seconds, which corresponds to a stereo angle of 1.2 degrees. The image scale is 3.9 metres per pixel. In this orientation the Babi and Aker regions are visible on the large lobe to the left, while Ma’at and the circular Hatmehit depression are seen on the small lobe to the right. Diffuse dust emission and other jets are visible all around the nucleus. Acknowledgement: D. Romeuf (University Claude Bernard Lyon 1, France; images: ESA/Rosetta/MPS for OSIRIS Team MPS/UPD/LAM/IAA/SSO/INTA/UPM/DASP/IDA
.
But creating a 3d anaglyph of dynamic events like this is notoriously difficult: often the jets are too faint or their duration is too short to find two high-quality images taken several minutes apart that are suitable to pair together to create this type of view. However, the OSIRIS team got lucky with this particular event, capturing two images separated by about two-and-a-half minutes.
The image shows a bright, collimated jet embedded in a broader emission structure. The three dimensional perspective also reveals the conical shape of the jet and that the collimated feature is emitted towards the observer.
Jets have been seen to originate from a large diversity of morphological features on the comet’s surface, such as pits, cliffs or icy boulder fields. The physical processes responsible for the different jet structures are subject to much discussion, but anaglyphs like these can certainly help in gaining an understanding of their three dimensional form and evolution.
The image is best enjoyed with red-blue/green ‘3D’ anaglyph glasses. The left- and right-eye views have been extracted and are provided below.
. 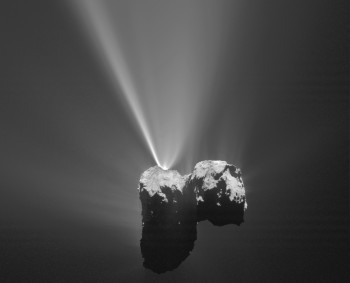 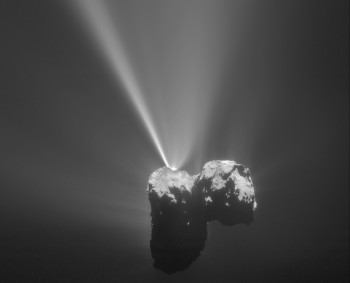 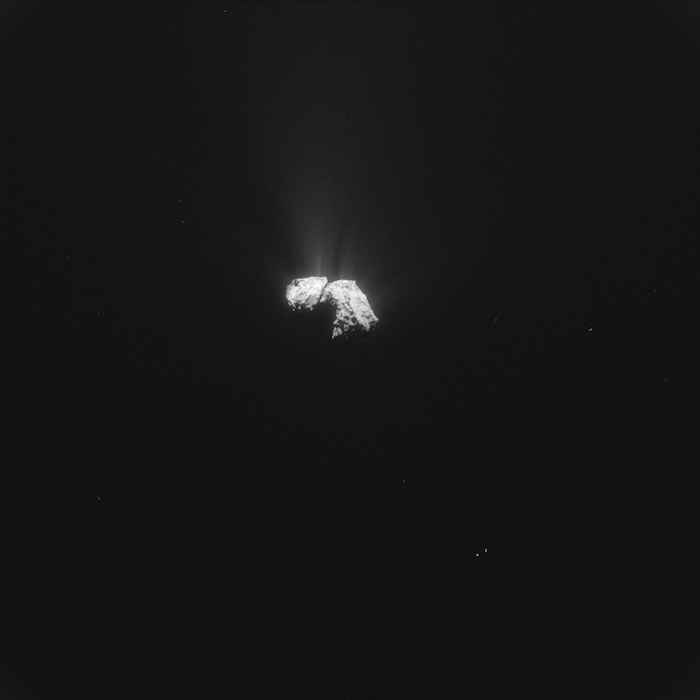 Single frame enhanced NAVCAM image of Comet 67P/C-G taken on 18 October 2015. Credits: ESA/Rosetta/NAVCAM – CC BY-SA IGO 3.0
-
The scale is 36.9 m/pixel and the image measures 37.8 km across. The contrast was increased to reveal the comet's activity, showing the glow of outflowing material from various regions on the nucleus.
In this view, the comet is oriented with the small lobe on the left and the large lobe on the right. Visible on the small lobe are parts of the Hatmehit, Maftet and Ma'at regions and, towards the centre of the image, the small regions of Nut and Serqet. Hints of the Anuket and Hapi regions can be seen on the comet's neck, while the large lobe presents the circular features of Seth alongside the smooth terrains of Anubis and parts of the complex Atum region.
The original 1024 x 1024 image of today's CometWatch is provided below:
. 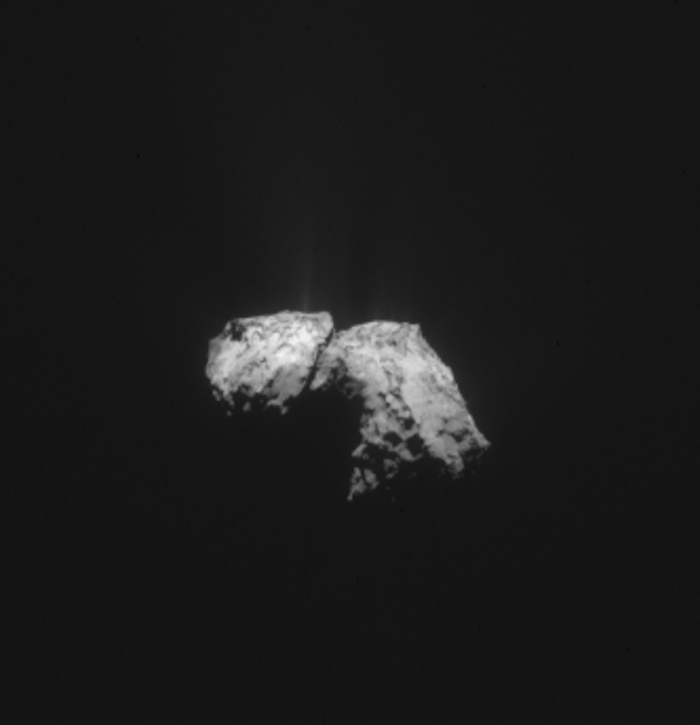 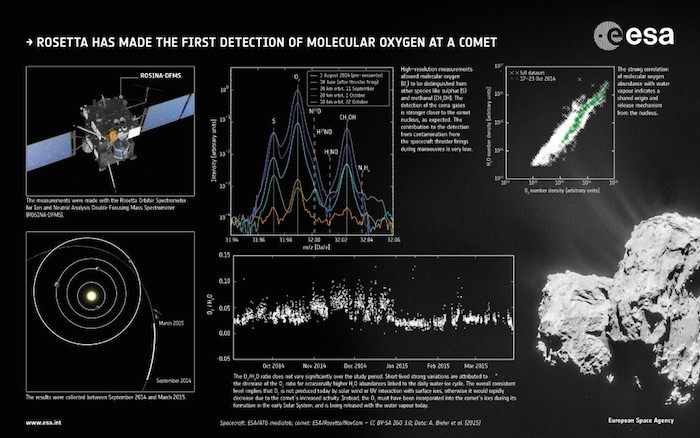 Rosetta has been studying Comet 67P/Churyumov–Gerasimenko for over a year and has detected an abundance of different gases pouring from its nucleus. Water vapour, carbon monoxide and carbon dioxide are the most prolific, with a rich array of other nitrogen-, sulphur- and carbon-bearing species, and even ‘noble gases’ also recorded.
Oxygen is the third most abundant element in the Universe, but the simplest molecular version of the gas, O2, has proven surprisingly hard to track down, even in star-forming clouds, because it is highly reactive and readily breaks apart to bind with other atoms and molecules.
For example, oxygen atoms can combine with hydrogen atoms on cold dust grains to form water, or a free oxygen split from O2 by ultraviolet radiation can recombine with an O2 molecule to form ozone (O3).
Despite its detection on the icy moons of Jupiter and Saturn, O2 had been missing in the inventory of volatile species associated with comets until now.
“We weren’t really expecting to detect O2 at the comet – and in such high abundance – because it is so chemically reactive, so it was quite a surprise,” says Kathrin Altwegg of the University of Bern, and principal investigator of the Rosetta Orbiter Spectrometer for Ion and Neutral Analysis instrument, ROSINA.
“It’s also unanticipated because there aren’t very many examples of the detection of interstellar O2. And thus, even though it must have been incorporated into the comet during its formation, this is not so easily explained by current Solar System formation models.”
. 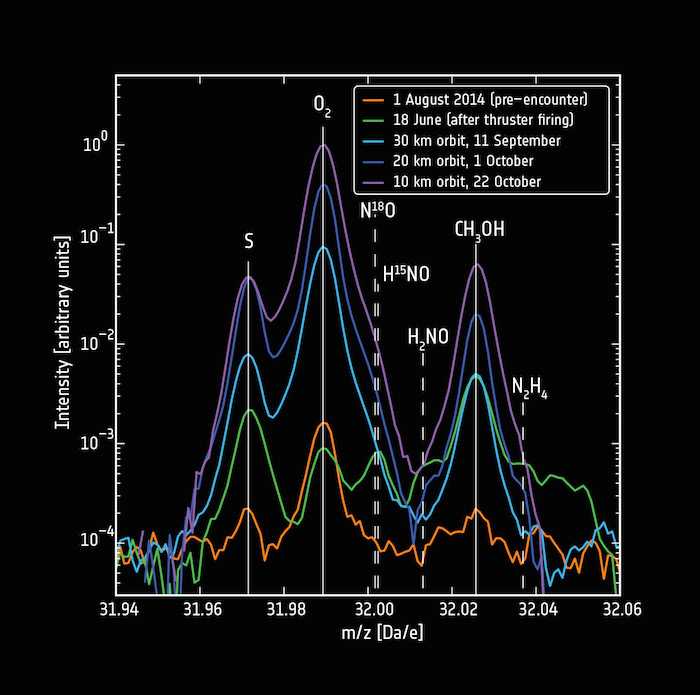 High-resolution measurements allowed molecular oxygen (O2) to be distinguished from other species like sulphur (S) and methanol (CH3OH). The detection of the coma gases is stronger closer to the comet nucleus, as expected. The contribution to the detection from contamination from the spacecraft thruster firings during manoeuvres is very low. Data from A. Bieler et al. (2015)
.
The team analysed more than 3000 samples collected around the comet between September 2014 and March 2015 to identify the O2. They determined an abundance of 1–10% relative to H2O, with an average value of 3.80 ± 0.85%, an order of magnitude higher than predicted by models describing the chemistry in molecular clouds.
The amount of molecular oxygen detected showed a strong relationship to the amount of water measured at any given time, suggesting that their origin on the nucleus and release mechanism are linked. By contrast, the amount of O2 seen was poorly correlated with carbon monoxide and molecular nitrogen, even though they have a similar volatility to O2. In addition, no ozone was detected.
Over the six-month study period, Rosetta was inbound towards the Sun along its orbit, and orbiting as close as 10–30 km from the nucleus. Despite the decreasing distance to the Sun, the O2/H2O ratio remained constant over time, and it also did not change with Rosetta’s longitude or latitude over the comet.
In more detail, the O2/H2O ratio was seen to decrease for high H2O abundances, an observation that might be influenced by surface water ice produced in the observed daily sublimation–condensation process.
The team explored the possibilities to explain the presence and consistently high abundance of O2 and its relationship to water, as well as the lack of ozone, by first considering photolysis and radiolysis of water ice over a range of timescales.
. 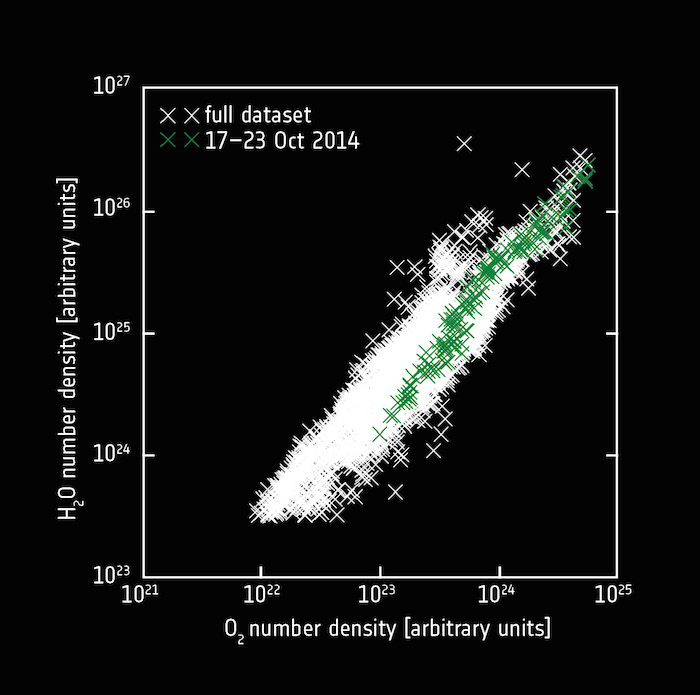 The strong correlation of molecular oxygen abundance with water vapour indicates a shared origin and release mechanism from the nucleus. Data from A. Bieler et al. (2015)
.
n photolysis, photons break bonds between molecules, whereas radiolysis involves more energetic photons or fast electrons and ions depositing energy into ice and ionising molecules – a process observed on icy moons in the outer Solar System, and in Saturn’s rings. Either process can, in principle, lead to the formation and liberation of molecular oxygen.
Radiolysis will have operated over the billions of years that the comet spent in the Kuiper Belt and led to the build-up of O2 to a few metres depth. But these top layers must all have been removed in the time since the comet moved into its inner Solar System orbit, ruling this out as the source of the O2 seen today.
More recent generation of O2 via radiolysis and photolysis by solar wind particles and UV photons should only have occurred in the top few micrometres of the comet.
.

The O2/H2O ratio does not vary significantly over the study period. Short-lived strong variations are attributed to the decrease of the O2 ratio for occasionally higher H2O abundances linked to the daily water-ice cycle. The overall consistent level implies that O2 is not produced today by solar wind or UV interaction with surface ices, otherwise it would rapidly decrease due to the comet's increased activity. Instead the O2 must have been incorporated into the comet's ices during its formation in the early Solar System, and is being released with the water vapour today. Data by A. Bieler et al. (2015)
-
“But if this was the primary source of the O2 then we would have expected to see a decrease in the O2/H2O ratio as this layer was removed during the six-month timespan of our observations,” says Andre Bieler of the University of Michigan and lead author of the paper describing the new results in the journal Nature this week.
“The instantaneous generation of O2 also seems unlikely, as that should lead to variable O2 ratios under different illumination conditions. Instead, it seems more likely that primordial O2 was somehow incorporated into the comet’s ices during its formation, and is being released with the water vapour today.”
In one scenario, gaseous O2 would first be incorporated into water ice in the early protosolar nebula stage of our Solar System. Chemical models of protoplanetary discs predict that high abundances of gaseous O2 could be available in the comet forming zone, but rapid cooling from temperatures above –173ºC to less than –243ºC would be required to form water ice with O2 trapped on dust grains. The grains would then have to be incorporated into the comet without being chemically altered.
“Other possibilities include the Solar System being formed in an unusually warm part of a dense molecular cloud, at temperatures of 10–20ºC above the –263ºC or so typically expected for such clouds,” says Ewine van Dishoeck of Leiden Observatory in the Netherlands, co-author of the paper.
“This is still consistent with estimates for the comet formation conditions in the outer solar nebula, and also with previous findings at Rosetta’s comet regarding the low abundance of N2.”
Alternatively, radiolysis of icy dust grains could have taken place prior to the comet’s accretion into a larger body. In this case, the O2 would remain trapped in the voids of the water ice on the grains while the hydrogen diffused out, preventing the reformation of O2 to water, and resulting in an increased and stable level of O2 in the solid ice.
Incorporation of such icy grains into the nucleus could explain the observed strong correlation with H2O observed at the comet today.
“Regardless of how it was made, the O2 was also somehow protected during the accretion stage of the comet: this must have happened gently to avoid the O2 being destroyed by further chemical reactions,” adds Kathrin.
“This is an intriguing result for studies both within and beyond the comet community, with possible implications for our models of Solar System evolution,” says Matt Taylor, ESA’s Rosetta project scientist.
Quelle: ESA
Raumfahrt
« Zum vorherigen Eintrag Zum nächsten Eintrag »
3703 Views
Created with page4