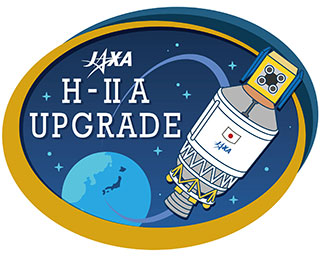 Enhanced launch performance to cope with geostationary satellite launch -
Adopting it to the H-IIA Launch Vehicle No. 29, our upgraded flagship launch vehicle 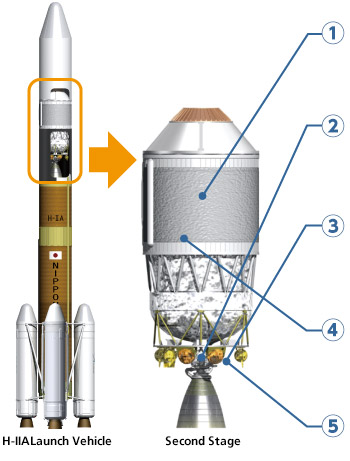 Painting the liquid hydrogen tank in white to reduce propellant evaporation due to sun light
During space flight, the launch vehicle is constantly heated by the sun and the liquid hydrogen (which is about minus 250 degrees Celsius) in the tank evaporates. By coting the tank surface with special white paint, the tank surface reflects the sun light to reduce propellant evaporation to contribute to Long-Coast.
Decreasing the volume of liquid oxygen for cooling to a third by renovating the engine cooling function
To ignite the engine, the turbo pump has to be cooled using liquid oxygen. We have developed a new cooling system called the “trickle pre-cooling” to significantly reduce the consumption of liquid oxygen during Long-Coast so that more liquid oxygen can be used for engine operation.
BBQ rolling the launch vehicle to prevent avionics from being heated by the sun
When one specific side of the launch vehicle is constantly hit by sunlight, the temperature of only that side goes up. By slowly rolling the launch vehicle like a (barbecue (BBQ) roll) while maintaining its attitude vertically against sunlight, we can keep the temperature of all parts of the launch vehicle constant.
Reducing the consumption of propellant for attitude control by effectively utilizing evaporating propellant
During the Long-Coast, propellant has to be held at the bottom part of the tank to avoid propellant evaporation as much as possible. For that, the propellant for attitude control (Hydrazine) used to be emitted backwards. In the case of Long-Coast, the volume of Hydrazine will not be enough; therefore, in the new system, evaporating propellant will be effectively used.
Equipped with a large volume power source and high performance antenna for long flight
We developed a large-size lithium ion battery to secure power for avionics during the Long-Coast. A high performance antenna is also installed on the launch vehicle for assuring communication with the launch vehicle even from 36,000 km away to acquire flight status data from the vehicle, such as the engine operation status, even when it reaches near the geostationary orbit.
.
Adding the function to control second stage engine thrust (engine power)
The speed of the launch vehicle near the geostationary orbit (apogee) is slow, thus, if the second stage engine is ignited to full power (100% thrust), it is too powerful to precisely inject a payload into the target orbit. Therefore, we added a function called the “throttling function” to control the second stage engine thrust to 60% so that more flexible orbit insertion becomes possible.
. 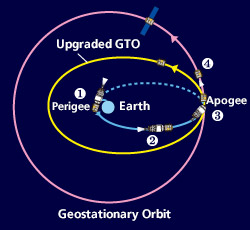