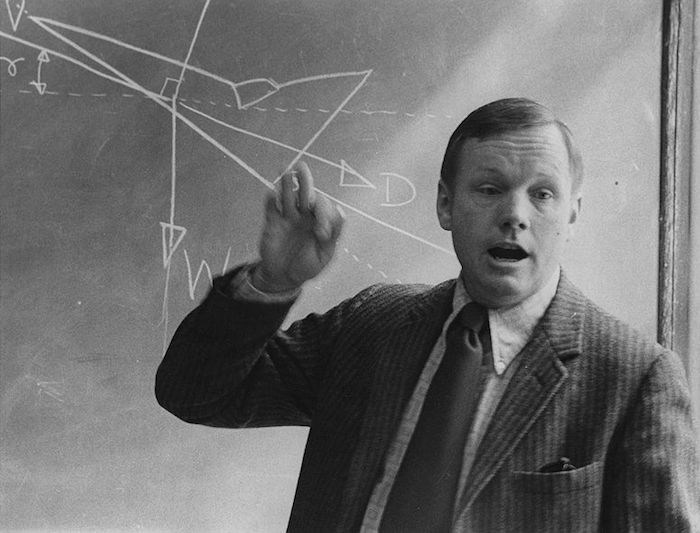 He knows of what he speaks.

It is only through the lens of history that I have come to appreciate the unique opportunity afforded to me 40 years ago while attending the University of Cincinnati. Neil Armstrong was a member of the Aerospace Engineering faculty there from 1971 to 1979. I attended his classes on Aerospace Design, Aircraft Performance, and Flight Testing. My classmates and I were pretty casual about it at the time; I have no autographs, logbook endorsements, or photographs taken with him. It would be different if it were today, I assure you. What I do have are memories.

After reading James R. Hansen’s authorized biography, First Man, I realized that my impressions of him had been correct. For one, Neil did not like feigned geniality. He once took us on a field trip to Lunken Airport to show us some of the many types of flight control systems that have been devised. In those days, you could pretty much stroll right out onto the ramp without anybody asking any questions – unless you were a celebrity. He had just started telling us about how the Mooney pitch trim system utilizes an all-moving tail when someone came out from the FBO acting like Neil was his long-lost best friend. Judging from Armstrong’s reaction, that was not the case. The newcomer was basically ignored and we went on our way.
Neil was an airplane geek through and through. One of his quiz questions from class was a word problem about the 1903 Wright Flyer. It included an excerpt from the Wright diary which described the machine’s tendency to dart up and down, ultimately resulting in early termination of the flight. The question was, “Why did it behave this way?” The cause could be attributed to the forward-mounted (canard) pitch control pivoting at 50% of its chord, which is an inherently unstable arrangement.
Even though Armstrong’s humble demeanor was well-known, he had a competitive side. That should really come as no surprise to anyone, given the man’s accomplishments. I once had occasion to pay him a visit at his office. It was the largest one in the Aerospace Engineering department. He had a model of the X-15 on his desk, but there were no spacecraft models to be seen. After my school-related question was answered, the conversation turned to small talk. When we started discussing the game of tennis he confessed that he had quit playing when his son started to beat him at it.
The most excited I ever saw him was when I answered a technical question in class. This came after an uncomfortably long silence while he was waiting for someone to speak up. I somewhat uncertainly said “the drag equation?” and he shot back with “RIGHT!” I almost came up out of my seat. The most we ever got excited around him was at the end of another of his classes. We were getting ready to leave as he was telling us of a colleague who had further information on the subject matter. Only he didn’t put that way. What he said was “… and this guy has some real good dope.” At first we were stunned, then burst out in uncontrollable laughter. The irony was too much to contain. Professor Armstrong just stood there and blinked.
He never once talked about his spaceflight experiences. Apparently this was a standing policy.
. 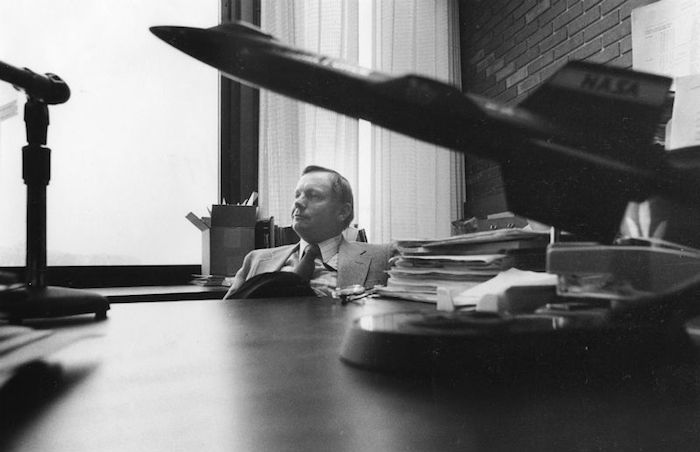 We can talk about engineering all you want, but don’t mention space.
.
As Mr. Collins points out, Armstrong’s ability to remain calm under pressure and solve the problem quickly was his outstanding trait. He had many close calls throughout his flying career. His F9F-2 Panther jet hit a cable while flying at 500 feet during the Korean War. The cable sheared off about six feet of the right wing but Armstrong managed to maintain control, fly back to friendly territory, and eject.
His first space flight was Gemini 8. This was to be the first rendezvous and docking of two spacecraft in orbit, a key component of the moon missions to follow. After a successful docking with an unmanned Agena upper stage, the two-man Gemini crew began having trouble with attitude control. Thinking the problem was with the Agena, they undocked. The problem became worse. A maneuvering thruster had stuck open on the Gemini spacecraft, not the Agena, and they were now on the verge of spinning out of control. Armstrong elected to energize the Reentry Control System and use those thrusters to stabilize the spacecraft. It worked, but the crew was then forced by mission rules to land early.
While preparing for his Apollo mission, Armstrong flew an experimental contraption officially named the Lunar Landing Training Vehicle. Its unofficial name was the Flying Bedstead. Relying solely on the thrust of a jet engine for lift, it was a very unforgiving machine. When control was lost on one of these “flights,” Armstrong once again owed his life to an ejection seat. It was estimated he had a half-second to spare on the decision to eject.
. 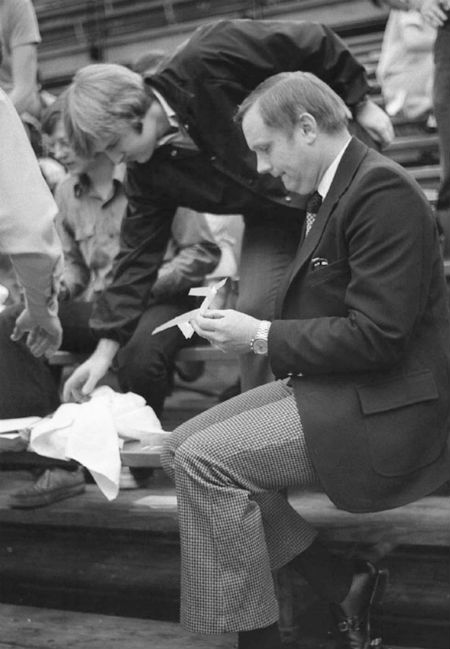 Now there’s a paper airplane that would fly well!
.
There were 500 million of us glued to our TV sets in 1969 to watch the drama of the first moon landing unfold. Armstrong had to assume manual control of the Lunar Module to avoid landing in a boulder field. The prolonged flight to search for a suitable site started to raise concerns about fuel remaining. When word came that Armstrong and Aldrin were safely down on the lunar surface, Mission Control responded with: “Roger, Tranquility. We copy you on the ground. You got a bunch of guys about to turn blue. We’re breathing again. Thanks a lot.”
Ten years later, in 1979, Armstrong and co-pilot Pete Reynolds set a time-to-climb world record in the first production Learjet 28, going from sea level to 15,000 meters in 12 minutes and 26.7 seconds. Fittingly they took off from Kitty Hawk, North Carolina. After reaching their target altitude, the plan called for a gradual idle thrust descent into Elizabeth City. The plane had been loaded with minimal fuel to keep it as light as possible for the record attempt.
What was not included in that plan was provision for a nearly 100-knot headwind. It then became an anxious seat-of-the-pants exercise in fuel and energy management. The plane landed safely and everyone went off to celebrate that evening. The next morning a mechanic climbed aboard the record-setting Lear to start the engines and taxi across the ramp for refueling. No sooner had the left engine settled at its idle speed when it quit from fuel starvation. They had cut it that close.
I believe Neil Armstrong considered himself to be an engineer first, a pilot second, and possibly a teacher third. That he was accomplished at all three is a rarity. Achieving hero status was not on his list. Armstrong recognized his place in history had been secured atop the shoulders of thousands of others. In an age where “image is everything,” Neil Armstrong was the genuine article.
Quelle: AirFacts
Raumfahrt
« Zum vorherigen Eintrag Zum nächsten Eintrag »
3554 Views
Created with page4