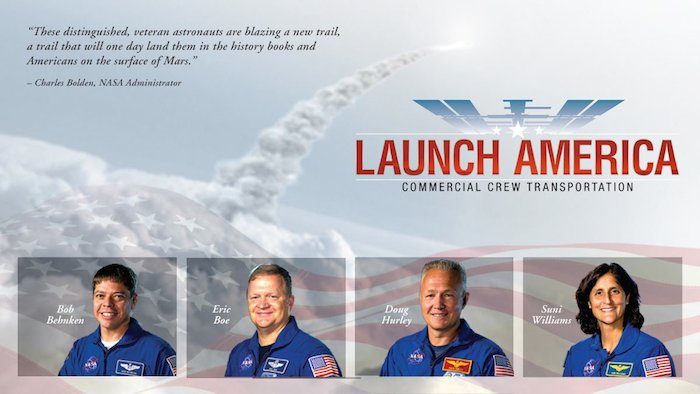 NASA on Thursday named four astronauts who will train for test flights of new Boeing and SpaceX capsules, likely becoming the first crews to launch from the Space Coast since the final shuttle mission four years ago.
Bob Behnken, Eric Boe, Doug Hurley and Sunita Williams are veteran test pilots who have flown on the shuttle and the International Space Station.
The orbital test flights to the station, which could launch in 2017, hope to pave the way for regular trips by the new commercial crew vehicles, ending reliance on Russia for access to and from the outpost.
"I remember when I launched from Kennedy the first time on a U.S. space shuttle, and it was pretty amazing," Williams said in a NASA video released Thursday. "So I can only imagine what it's going to be like after this long period of time to get back on a spacecraft at Kennedy."
SpaceX plans to launch its Falcon 9 rocket — which suffered a failure on its last flight that is now under investigation — and Dragon capsules from Kennedy Space Center's pad 39A. Boeing will launch CST-100 capsules on United Launch Alliance's Atlas V rocket from Cape Canaveral Air Force Station.
While Williams' reference to KSC suggested she would fly with SpaceX, NASA said the four astronauts will train with both companies and have not yet been assigned to flights.
Two-person crews will fly the first test flights by each capsule, after they have completed an orbital test flight without people on board.
Company proposals anticipate an all-NASA crew flying SpaceX's Dragon test flight, with Boeing's CST-100 carrying a split NASA-Boeing crew. Boeing has not yet identified its astronaut.
That means three of the four NASA astronauts likely will fly the two test missions, with one serving as a backup.
"These distinguished, veteran astronauts are blazing a new trail," said NASA Administrator Charles Bolden.
Behnken and Boe are Air Force colonels who each flew two shuttle missions. Behnken until recently was chief of NASA's Astronaut Office at Johnson Space Center, and Boe has served as its deputy chief.
"I'm honored to get the opportunity to participate with this new group, and to work with a team to get us on to this new era in spaceflight," Boe said in the NASA video.
A retired Marine Corps colonel, Hurley's two shuttle missions included the last one, which blasted off four years ago this week.
He said a "huge" team at NASA, together with Boeing and SpaceX teams, would work to make the commercial crew vehicles " as safe as possible."
Behnken said by working shoulder-to-shoulder with the companies, the astronauts were "instrumental in making sure the vehicles are ready for the first flights when the time comes."
Williams is a Navy captain and helicopter pilot whose 322 days in space during two ISS expeditions rank her sixth all-time among U.S. astronauts and second among all women. She earned a master's degree in engineering management from the Melbourne-based Florida Institute of Technology in 1995.
NASA last fall awarded Boeing a contract worth up to $4.2 billion, and SpaceX one worth up to $2.6 billion. Each company is guaranteed at least two flights to the ISS after NASA certifies their vehicles as safe.
Bolden said flights on average would cost $58 million per astronaut, compared to $76 million on Russia's Soyuz spacecraft.
NASA hopes to begin commercial crew flights in 2017. However, the space agency says that timeline will be delayed if Congress does not provide the $1.2 billion it requested for the program next year. Current budget plans are at least $225 million below that total.
The station is expected to operate at least through 2024.
Quelle: Florida Today
--- 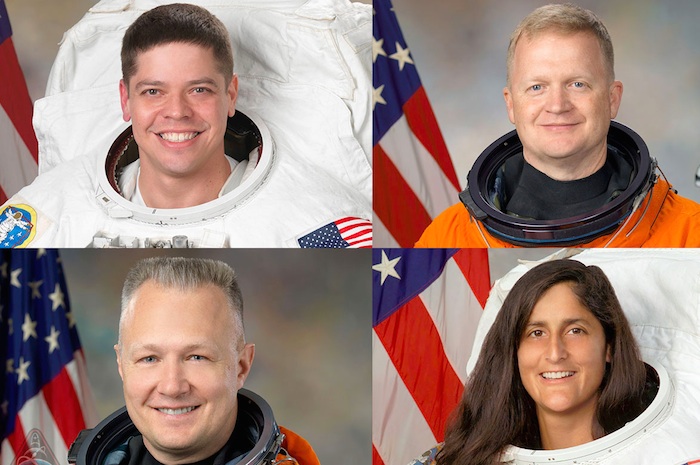