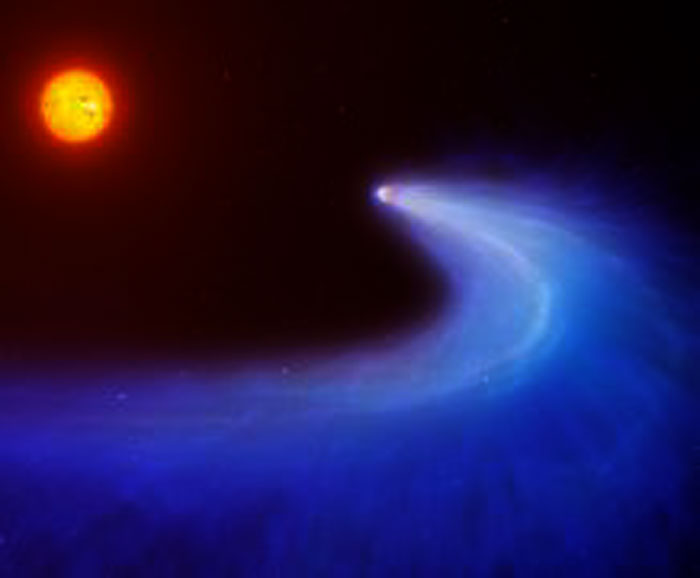 Giant comet-like tail discovered on small exoplanet
The prospect of finding ocean-bearing exoplanets has been boosted, thanks to a pioneering new study. An international team of scientists, including from the University of Exeter, has discovered an immense cloud of hydrogen escaping from a Neptune-sized exoplanet.
Such a phenomena not only helps explain the formation of hot and rocky ‘super-earths’, but also may potentially act as a signal for detecting extrasolar oceans. Scientists also believe they can use the discovery to envisage the future of Earth’s atmosphere, four billion years from today.
The ground-breaking research is presented in the respected scientific journal, Nature.
Professor David Sing, from the University of Exeter’s Physics and Astronomy department, co-authored the study. He said; “Escaping gas has been seen in the past for larger gas giant exoplanets, so it was a surprise that looking at a much smaller planet resulted in such a big and stunning comet-like display.”
With a mass approximately 23 times that of our Earth located 33 light years away, the exoplanet GJ436b rotates around its star in only three days and has an atmosphere which leaves behind a gigantic trail of hydrogen. Using the Hubble spatial telescope, scientists were able to see this hydrogen cloud’s shadow when it passes in front of the star.
David Ehrenreich, an astrophysicist with UNIGE and lead author of the paper said: “When you’re searching in the visible region you only see the shadow of a planet whose size is equivalent to four times that of Earth like Nep­tune. But if the sensitive eye is pointed toward the Hubble ultra violet light, the planet is transformed into a veritable monster, far bigger than the star.
“This cloud is very spec­tacular; it’s as if, after carrying the planet’s atmosphere at a high tempera­ture, causing the hydrogen to evaporate, the radiation of the star was too weak to blow away the cloud that accumulated around the planet.
This evaporation, although spectacular, would not threaten the atmosphere of the exoplanet which was formed several billion years ago. It may, however, explain the disappearance of at­mospheres observed on rocky exoplanets, which rotate very close to their star and are extremely hot, such as the famous “super-Earths” discovered by the Corot and Kepler spatial telescopes.
Vincent Bourrier, co-author of the study said this type of observation is very promising in the search of habitable pla­nets since “hydrogen from the ocean water that evaporate on slightly hotter terrestrial planets than the Earth could be detected.”
The phenomenon might even explain the disappearance of hydrogen outside our atmosphere, an element that abounded there more than 4 billion years ago.
Finally, such observations might help to envisage the distant future of our planet, when, in 3 or 4 billion years, the Sun will become a red giant and will circulate in our atmosphere making life impossible on Earth. Astrophysicists now hypothesize that our planet would be transformed into a giant comet, thus resembling a ‘hairy’ star just like GJ436b.
Quelle: The University of Exeter
--- 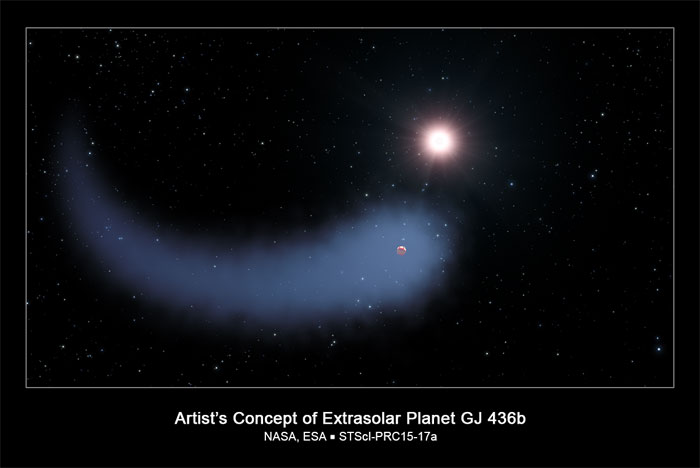 Astronomers using NASA's Hubble Space Telescope have discovered an immense cloud of hydrogen dubbed "The Behemoth" bleeding off a planet orbiting a nearby star. The enormous, comet-like feature is about 50 times the size of the parent star. The hydrogen is evaporating from a warm, Neptune-sized planet, due to extreme radiation from the star.
A phenomenon this large has never before been seen around any exoplanet. Given this planet's small size, it may offer clues to how Hot Super-Earths — massive, rocky, hot versions of Earth — are born around other stars through the evaporation of their outer layers of hydrogen.
"This cloud is very spectacular, though the evaporation rate does not threaten the planet right now," explains the study's leader, David Ehrenreich of the Observatory of the University of Geneva in Switzerland. "But we know that in the past, the star, which is a faint red dwarf, was more active. This means that the planet evaporated faster during its first billion years of existence. Overall, we estimate that it may have lost up to 10 percent of its atmosphere."
The planet, named GJ 436b, is considered to be a "Warm Neptune," because of its size and it is much closer to its star than Neptune is to our sun. Although it is in no danger of having its atmosphere completely evaporated and being stripped down to a rocky core, this planet could explain the existence of so-called Hot Super-Earths that are very close to their stars.
These hot, rocky worlds were discovered by the Convection Rotation and Planetary Transits (CoRoT) spacecraft (led by the French Space Agency (CNES) in collaboration with ESA (the European Space Agency), and several other international partners), and NASA's Kepler space telescope. Hot Super-Earths could be the remnants of more massive planets that completely lost their thick, gaseous atmospheres to the same type of evaporation.
Because Earth's atmosphere blocks most ultraviolet light, astronomers needed a space telescope with Hubble's ultraviolet capability and exquisite precision to find "The Behemoth."
"You would have to have Hubble's eyes," says Ehrenreich. "You would not see it in visible wavelengths. But when you turn the ultraviolet eye of Hubble onto the system, it's really kind of a transformation, because the planet turns into a monstrous thing."
Because the planet's orbit is tilted nearly edge-on to our view from Earth, the planet can be seen passing in front of its star. Astronomers also saw the star eclipsed by "The Behemoth" hydrogen cloud around the planet.
Ehrenreich and his team think that such a huge cloud of gas can exist around this planet because the cloud is not rapidly heated and swept away by the radiation pressure from the relatively cool red dwarf star. This allows the cloud to stick around for a longer time. The team's findings will be published in the June 25 edition of the journal Nature.
Evaporation such as this may have happened in the earlier stages of our own solar system, when Earth had a hydrogen-rich atmosphere that dissipated over 100 million to 500 million years. If so, Earth may previously have sported a comet-like tail. It's also possible it could happen to Earth's atmosphere at the end of our planet's life, when the sun swells up to become a red giant and boils off our remaining atmosphere, before engulfing our planet completely.
GJ 436b resides very close to its star — less than 3 million miles — and whips around it in just 2.6 Earth days. (In comparison, Earth is 93 million miles from our sun and orbits it every 365.24 days.) This exoplanet is at least 6 billion years old, and may even be twice that age. It has a mass of around 23 Earths. At just 30 light-years from Earth, it's one of the closest known extrasolar planets.
Finding "The Behemoth" could be a game-changer for characterizing atmospheres of the whole population of Neptune-sized planets and Super-Earths in ultraviolet observations. In the coming years, Ehrenreich expects that astronomers will find thousands of this kind of planet.
The ultraviolet technique used in this study also may spot the signature of oceans evaporating on smaller, more Earth-like planets. It will be extremely challenging for astronomers to directly see water vapor on those worlds, because it's too low in the atmosphere and shielded from telescopes. However, when water molecules are broken by the stellar radiation into hydrogen and oxygen, the relatively light hydrogen atoms can escape the planet. If scientists could spot this hydrogen evaporating from a planet that is a bit more temperate and little less massive than GJ 436b, that is a good sign of an ocean on the surface.
Quelle: NASA
Astronomie
« Zum vorherigen Eintrag Zum nächsten Eintrag »
3153 Views
Created with page4