After more than 13 years of helping predict weather and climate patterns and save lives in search and rescue operations, NOAA announced today it has turned off the NOAA-16 Polar-Orbiting Environmental Satellite (POES). It was one of NOAA's longest operating spacecraft, which have a planned lifespan of three to five years.
NOAA-16 was launched in 2000 and replaced by NOAA-18 as the primary POES satellite in 2005. The shutdown will result in no data gap, as NOAA-16 was being used as a back-up satellite.
NOAA will continue operating multiple POES spacecraft – NOAA-15, NOAA-18 and NOAA-19 – in addition to Suomi NPP, which is now NOAA’s primary operational polar satellite. NOAA’s POES spacecraft fly a lower, pole-to-pole orbit, capturing atmospheric data from space that feed NOAA’s weather and climate prediction models.
The deactivation process of NOAA-16 started this morning, with the final shut down occurring today at 10:20 a.m. EDT. Launched in September 2000, NOAA-16 made 70,655 successful orbits of the globe, traveling more than 2.1 billion miles, while collecting huge amounts of valuable temperature, moisture and image data.
“NOAA-16 helped our forecasters detect the early stages of severe weather from tornadoes and snow storms to hurricanes, including the busiest hurricane season on record – 2005,” said Mary Kicza, assistant administrator of NOAA’s Satellite and Information Service. “NOAA-16’s long life is a credit to the engineers, who built and operated it and the technology that sustained it. Although NOAA-16 is retired, we still operate a dependable, robust fleet of satellites that continue to provide crucial data.”
NOAA-16 was also part of the international Search and Rescue Satellite-Aided Tracking (SARSAT) network of satellites. SARSAT, which began in 1982, has rescued more than 37,000 people worldwide, including more than 7,300 in the United States and its surrounding waters by detecting distress signals from emergency beacons.
NOAA exclusively operates afternoon polar orbit spacecraft, while its key international partner, the European Organisation for the Exploitation of Meteorological Satellites (EUMETSAT), flies mid-morning orbit spacecraft. This teamwork results in significant savings for U.S. taxpayers, because sharing data helps produce more accurate and uniform data for forecasters. Through the Initial Joint Polar System agreement, NOAA and EUMETSAT established a shared satellite system by exchanging instruments and coordinating the operations of their polar-orbiting satellites to provide operational meteorological and environmental forecasting and global climate monitoring services worldwide.
NOAA and its partners at NASA are continuing to build the next generation of polar-orbiting satellites, the Joint Polar Satellite System (JPSS), which is scheduled to launch the JPSS-1 satellite in 2017.
NOAA’s JPSS represents significant technological and scientific advances for more accurate weather forecasting, helping build a Weather Ready Nation — saving lives and property, while promoting economic prosperity. JPSS provides continuity for critical observations of our vast atmosphere, oceans, land, and cryosphere — the frozen areas of the above planet. NOAA, working in partnership with NASA, ensures an unbroken series of global data for monitoring and forecasting environmental phenomena and understanding our Earth.
NOAA’s mission is to understand and predict changes in the Earth's environment, from the depths of the ocean to the surface of the sun, and to conserve and manage our coastal and marine resources.
. 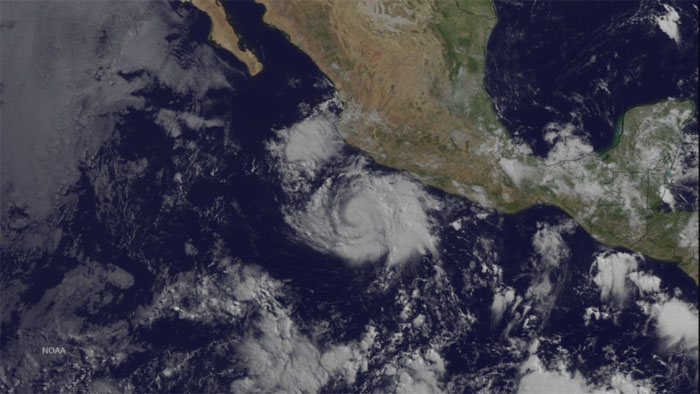 Cristina Moving Westward Well Offshore of the Coast of Mexico
After an overnight period of strengthening, conventional and microwave satellite imagery suggest that Cristina's intensity has leveled off. Cristina is expected to move westward today, followed by a west-northwestward motion. Cristina has consistently been intensifying at night during the convective maximum period, which seems likely to continue for another 24-48 hours. This image was taken by GOES-13 at 1445Z on June 11, 2014.
Quelle: NOAA
« Zum vorherigen Eintrag Zum nächsten Eintrag »
3464 Views
Created with page4