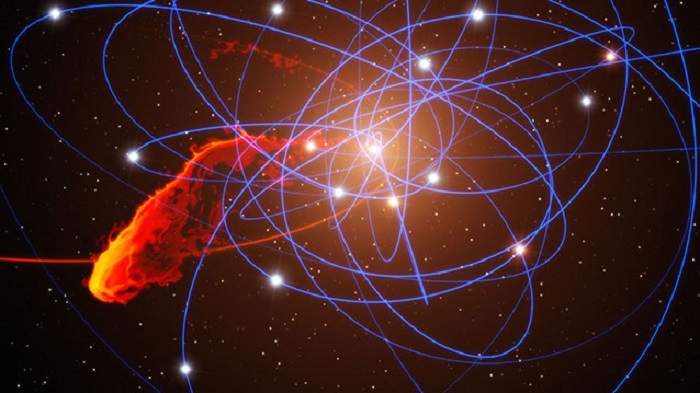 A simulation of the gas cloud G2’s encounter with the supermassive black hole Sgr A*. The blue lines mark the orbits of the so-called “S” stars that are in close orbits around the black hole. (Image by ESO/MPE/Marc Schartmann)
.

EVANSTON, Ill. --- Right now a doomed gas cloud is edging ever closer to the supermassive black hole at the center of our Milky Way galaxy. These black holes feed on gas and dust all the time, but astronomers rarely get to see mealtime in action.

Northwestern University’s Daryl Haggard has been closely watching the little cloud, called G2, and the black hole, called Sgr A*, as part of a study that should eventually help solve one of the outstanding questions surrounding black holes: How exactly do they achieve such supermassive proportions?

She will discuss her latest data at a press briefing, “Advances in Astrophysics,” to be held at 11 a.m. EDT Sunday, April 6, in Gwinnett Room of the Savannah International Convention Center. The briefing is part of the American Physical Society (APS) April Meeting in Savannah, Ga.

The closest approach between the black hole and gas cloud is predicted to occur any day now. Haggard has been using two world-class observatories, the Chandra X-ray Observatory and the Very Large Array, to gather data on this potentially spectacular encounter.

“Our most recent Chandra observation does not show enhanced emission in the X-rays,” Haggard said. “From the X-ray perspective, the gas cloud is late to the party, but it remains to be seen whether G2 is fashionably late or a no show.”

At the APS meeting, she also will make a presentation, “Hot News from the Milky Way’s Central Black Hole,” as part of the session “Hot Topics in Astrophysics” from 3:30 to 5:18 p.m. EDT Sunday, April 6, in Chatham Ballroom C of the convention center.

“This work is fascinating because it will teach us about the growth and feeding of supermassive black holes,” said Haggard, a postdoctoral fellow in Northwestern’s Center for Interdisciplinary Exploration and Research in Astrophysics (CIERA). “We know they are big, and we know they are out there -- in vast numbers -- but we aren’t sure in detail how they get their mass.

“Do they grow rapidly when they are young, like our kids do, or do they grow in fits and starts, whenever fuel becomes available? In watching the encounter between Sgr A* and

G2 we may catch a massive black hole in the act of snatching its next meal,” she said.

In her presentation, Haggard will show recent data from Chandra (X-rays) and the VLA (radio waves), including the largest flare ever seen from Sgr A*.

“Sgr A* and the newly discovered magnetic neutron star, SGR J1745-29, which appears to be in orbit around the black hole, are dishing out lots of interesting science,” Haggard said. “We’ve detected the brightest X-ray flare yet observed from Sgr A* and gathered data that are causing us to overhaul of our understanding of the neutron star population in the galactic center.”