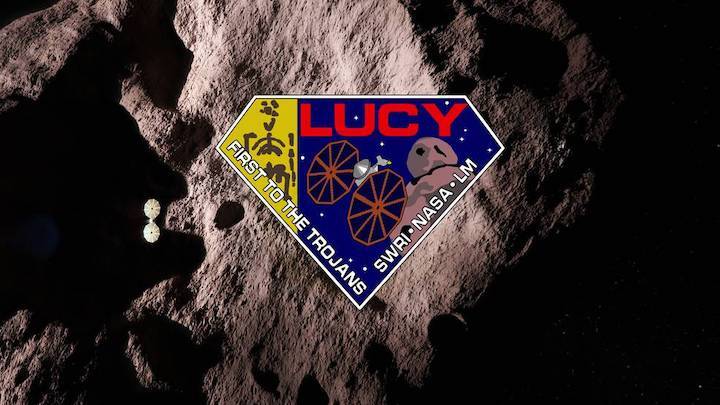 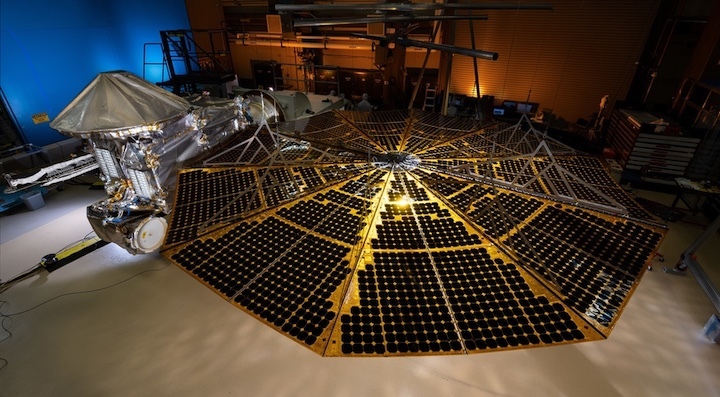 WASHINGTON — Engineers are investigating why one of the two solar arrays on NASA’s Lucy spacecraft may have failed to lock into place when deployed after launch Oct. 16.

In an Oct. 17 statement, NASA said that while the spacecraft is healthy, one of the two circular solar panels “may not be fully latched” after its deployment. The solar arrays deployed in the first half-hour after separation from the Centaur upper stage of the Atlas 5 rocket that launched it early Oct. 16.

Both solar panels are generating power, the agency stated, and there are no other problems with the spacecraft. “In the current spacecraft attitude, Lucy can continue to operate with no threat to its health and safety,” NASA said in the statement. “The team is analyzing spacecraft data to understand the situation and determine next steps to achieve full deployment of the solar array.”

“This team has overcome many challenges already and I am confident they will prevail here as well,” Thomas Zurbuchen, NASA associate administrator for science, tweeted Oct. 17.

Lucy’s two solar panels are each 7.3 meters in diameter. Stored in a folded configuration, they were designed to unfurl “like Chinese fans,” said Joan Salute, associate director for flight programs in NASA’s planetary science division, at a prelaunch briefing Oct. 14.

The arrays have a combined 51 square meters of solar cells. That large area is needed since the spacecraft will be flying out to Jupiter’s distance from the sun, where the sunlight is only a few percent as powerful as at Earth. “That enables Lucy to travel further away from the sun than any other solar-powered spacecraft to date,” said Katie Oakman, Lucy structures and mechanisms lead at Lockheed Martin Space, at the Oct. 14 briefing. Lockheed was the prime contractor for Lucy, although the solar arrays were built by Northrop Grumman.

In the vicinity of the Earth, Lucy’s panels can generate 18 kilowatts of power. However, when flying by the Trojan asteroids that are the destination of the mission, the arrays will produce only 500 watts of power, still sufficient to operate the spacecraft and its three main instruments.

She added there was no specific design requirement for circular arrays versus more conventional rectangular ones, but that those offered the most area while fitting in the confines of the Atlas payload fairing. “This particular design really enables us to stow up closely and tightly next to the spacecraft for launch,” she said. “Having any particular shape other than this really unique design wouldn’t enable us to get to that 51-meter-squared of active cell area and still fit within the launch vehicle fairing.”

It’s unclear if the problem will affect other work to check out the spacecraft after its launch. That includes deployment of the instrument pointing platform, on which the three major instruments are mounted, which is scheduled for about two days after launch. 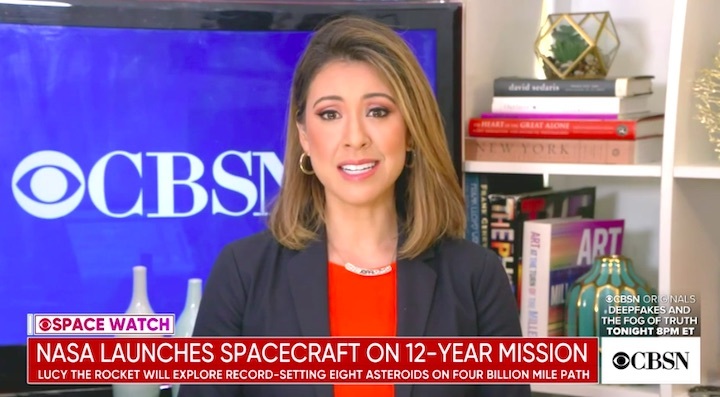 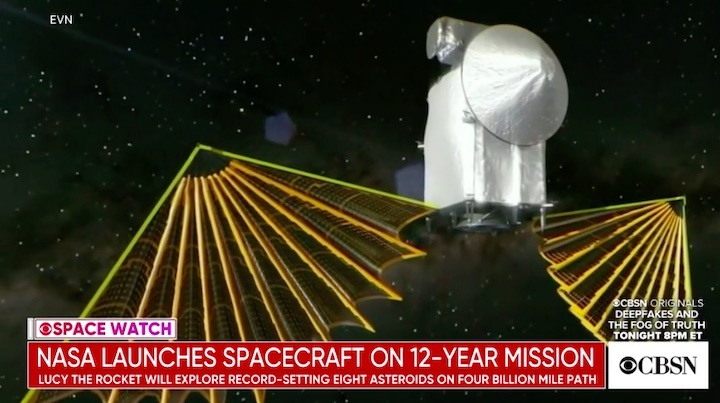 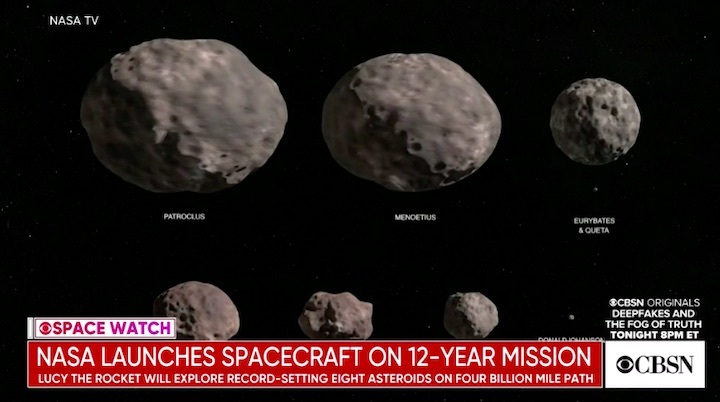 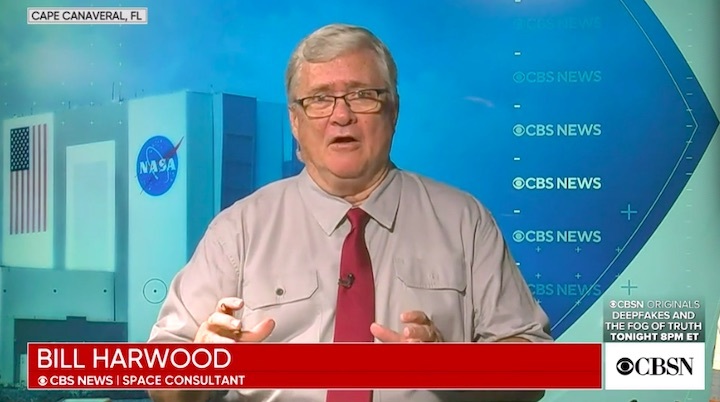 NASA's $1 billion Lucy asteroid probe is safely on its way, but engineers are studying telemetry indicating one of its two circular solar arrays may not be fully deployed and latched in place, the agency said in a blog post Sunday.

Lucy was launched from Cape Canaveral early Saturday atop a United Launch Alliance Atlas 5 rocket and released on a trajectory setting up two velocity-boosting gravity-assist Earth flybys in 2022 and 2024 to fling the craft out to a swarm of asteroids sharing Jupiter's orbit.

A third Earth flyby is planned for 2030 to send the craft to a pair of asteroids in another "Trojan" swarm in 2033.

Built by Lockheed Martin Space, Lucy will be operating farther from the sun than any other solar-powered spacecraft before it, and its two Northrop Grumman-built arrays, designed to unfold 360 degrees like Chinese fans, are critical to mission success.

Shortly after launch Saturday, NASA confirmed both 24-foot-wide arrays had deployed and were generating power. But on Sunday, the agency said one of the arrays may not be latched in place.

"Following a successful launch ... analysis of NASA's Lucy spacecraft systems show the spacecraft is operating well and is stable," the blog post said. "Lucy's two solar arrays have deployed, and both are producing power and the battery is charging."

"While one of the arrays has latched, indications are that the second array may not be fully latched. All other subsystems are normal. In the current spacecraft attitude, Lucy can continue to operate with no threat to its health and safety."

It's not yet clear whether the array in question is, in fact, fully deployed but not latched in place or whether it did not reach full deployment and is not generating the same amount of power as its counterpart. It's also not yet clear whether Lucy can safely fire its maneuvering thrusters with an unlatched array.

"The two solar arrays have deployed, but one may not be fully latched," he tweeted. "The team is analyzing data to determine next steps. This team has overcome many challenges already and I am confident they will prevail here as well."

Whether intentional or not, Zurbuchen's tweet included a frame from the Goddard animation above showing one array fully deployed and one with a gap indicating a partial deployment. 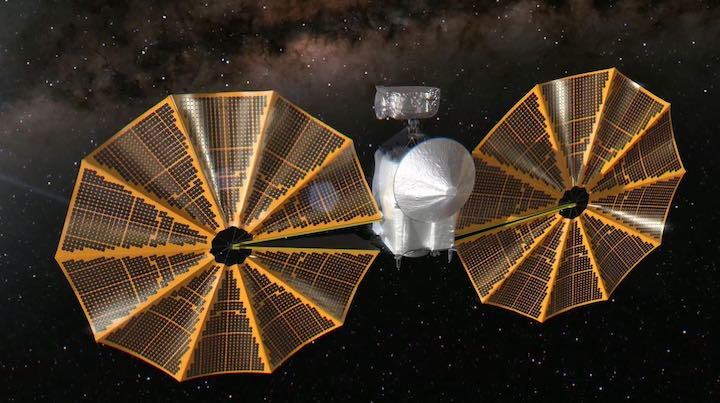 A NASA official said Monday there is “widespread optimism” that a solar array snag discovered on the Lucy asteroid probe after its launch over the weekend will not jeopardize the spacecraft’s 12-year exploration mission.

Lucy’s two solar arrays were folded up on each side of the box-shaped spacecraft during launch Saturday from Cape Canaveral aboard an Atlas 5 rocket. One of the two solar array wings fully unfurled and latched after launch, but NASA says it did not receive confirmation that the other wing latched into place.

The Atlas 5 deployed the Lucy probe nearly an hour after liftoff, sending the 3,300-pound (1,500-pound) spacecraft on an escape trajectory into the solar system. The launch kicked off a $981 million mission to explore the Trojan asteroids, a primordial population of small worlds leading and trailing Jupiter in its orbit around the sun.

Lucy is the mission is the first to explore the Trojan asteroids, which scientists say are leftover building blocks similar to objects that came together to form the solar systems giant outer planets. The probe will fly by seven Trojan asteroids between 2027 and 2033, plus one object in the main asteroid belt in 2025.

A few minutes after separating from the Atlas 5 launcher, Lucy began a pre-programmed sequence to unfold the solar arrays like giant Chinese fans. Fully deployed, the UltraFlex solar wings span about 24 feet (7.3 meters) in diameter, the circular power arrays to ever fly in space.

“The spacecraft is stable and healthy, and it’s safe,” Glaze said Monday in a virtual town hall meeting by NASA’s science mission directorate. “It’s not in any danger, at this point, in this configuration. So we are taking our time in determining what’s going on with the solar array, and developing a path forward on how to remediate.”

“We’re very happy to report that we are getting most of the power we expected at this point in the mission,” said Joan Salute, associate director for flight programs at NASA’s planetary science division. “It’s not 100%, but it is fairly close. So that is great news.’

In an interview with Spaceflight Now, Salute said the power output from the solar arrays appears to be “most likely above 90%” of the expected level of 18,000 watts.

“We don’t know if it’s a latch problem, or that it is only partially deployed,” Salute said.

Lucy will become the farthest spacecraft from the sun to ever rely on solar power, reaching a maximum distance of 530 million miles (853 million kilometers), nearly six times farther than Earth’s orbit. When it reaches the Trojan asteroids, Lucy’s solar arrays were expected to generate just 500 watts of power.

That level power output is sufficient to feed Lucy’s three science instruments, which only need about 82 watts of power during each asteroid encounter. Lucy’s flight computer, communications system, and other components will also draw on power generated by the UltraFlex arrays.

Salute said controllers may attempt to command Lucy to re-attempt a full deployment of the solar array.

“They’re checking different analyses, making sure that that would be safe to implement,” she said. “One of the steps that they would be taking in the fairly short term would be to provide a second attempt at full deployment and latching.”

Lockheed Martin, the prime contractor for the Lucy spacecraft, oversees mission operations from a control center near Denver.

Although the solar arrays are generating sufficient power, engineers are also evaluating whether it is safe to fire the spacecraft’s main engine with an unlatched solar array. The mission’s first major deep space maneuver is tentatively scheduled for mid-November.

“At this point in time, they hope to go ahead with that maneuver, but it is too early to tell,” Salute said.

The spacecraft has continued firing its smaller attitude control thrusters without any issues, she said.

“They just want to really get a little more understanding under their belt about which would be safer — to re-deploy or to operate as is,” Salute said. “And I don’t think they have a firm answer on that option quite yet.”

Managers have postponed one other major post-launch activity to allow engineers to address the solar array issue. Lucy’s instrument platform was supposed to release and deploy two days after launch. That has been temporarily put on hold, according to Salute.

“There’s still widespread optimism that this can be overcome, or worked with,” Salute said.