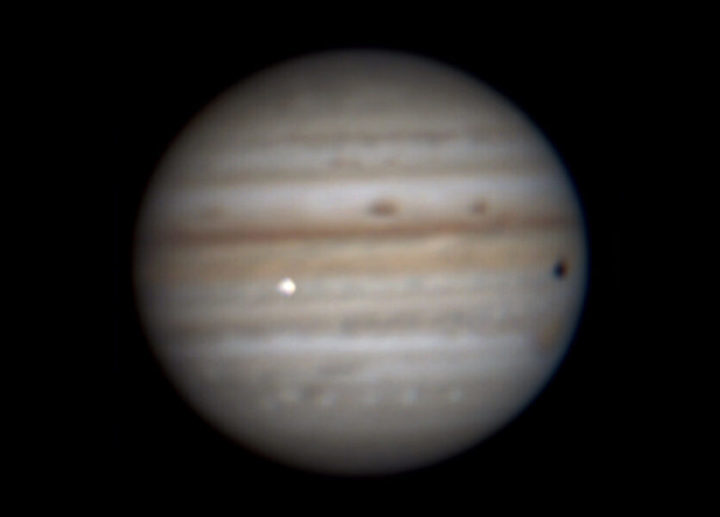 A possible new impact at Jupiter appears in this image taken by José Luis Pereira around 22:39 UT (18:39 EDT) on September 13th. Marc Delcroix processed the photo. North is up and the planet rotates from east to west (left to right).
José Luis Pereira

Did Jupiter just get smacked again? Amateur astronomer José Luis Pereira of Brazil just discovered a probable new impact at the gas giant on September 13th at around 22:39:30 UT (18:39:30 EDT). Weather conditions were poor at the time, but Pereira decided to search anyway for possible flashes with DeTeCt software. The free program, created by planetary observer Marc Delcroix, is a useful tool to check for transient events such as planetary impacts.

Despite poor conditions Pereira suspected something on his first video and ran DeTeCt to check it out. The program alerted him that there was a high probability that what he saw was indeed a collision. He immediately sent a message to Delcroix for confirmation.

If confirmed, it would be the eighth recorded impact at Jupiter since the first in July 1994, when fragments of sundered Comet Shoemaker-Levy 9 slammed into the planet and left a trail of prominent dark scars.

Jupiter rotates rapidly, coming round in just under 10 hours. To find a potential dark spot in the impact's wake, you'll need to know its latitude and longitude. But because the planet isn’t a rigid body, its rotation rate varies some by latitude. Equatorial regions spin fastest and polar regions slower. That’s why three systems are used to determine a feature's longitude: System I for locations within 10° of the equator (for the current flash), System II for all higher latitudes, and System III to match the rotation of the planet’s magnetosphere and Jupiter’s official rotation rate. Often, all three longitudes will be given for completeness.

Pereira captured the flash at latitude –5.5° and longitude 105.7° (System I / L1), 83.3° (System II / L2), and 273.4° (System III / L3). To determine the current or a future Jovian longitude in either system, use the Arkansas Sky Observatory’s Jupiter Central Meridian site and input the desired UT time. Click here to convert your local time to UT.

Amateurs are encouraged to check any videos or photographs taken within 5 minutes of the impact time to confirm the event. I also hope you’ll be watching the site for any impact scar that might appear in the coming nights. Happily, a dark marking should stand out well against the pale Equatorial Zone.