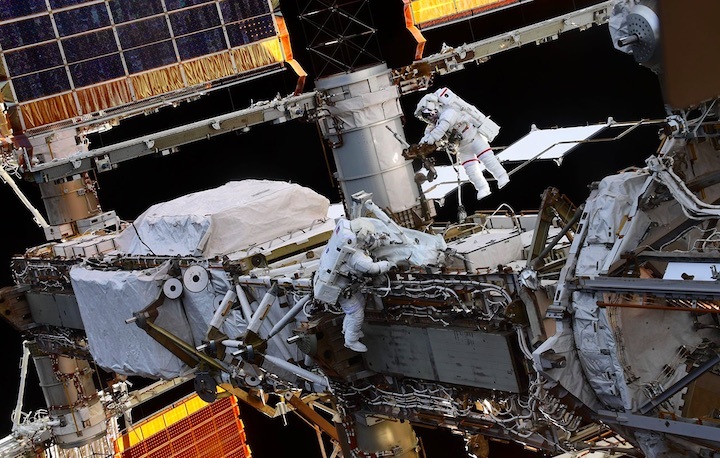 JAXA astronaut Akihiko Hoshide (at right) and Thomas Pesquet with ESA work outside of the International Space Station on Sunday, Sept. 12, 2021 on the first international spacewalk to be performed without an American or Russian crewmate. (ESA)

Two astronauts installed the mount for a new solar array outside of the International Space Station during the first spacewalk to not include an American or Russian crew member as one of the pair.

Akihiko Hoshide of the Japan Aerospace Exploration Agency (JAXA) and French astronaut Thomas Pesquet with the European Space Agency (ESA), both clad in U.S. spacesuits bearing their respective countries' flags on their left shoulders, spent six hours and 54 minutes working in the vacuum of space on Sunday (Sept. 12). The extravehicular activity (EVA) began at 8:15 a.m. EDT (1215 GMT) when the two Expedition 65 crewmates switched their suits to battery power.

Exiting the U.S. Quest airlock, Hoshide and Pesquet made their way to the port (or left-hand) side of the space station's backbone truss to a position referred to as P4. There, they worked together to build a bracket structure, called a modification kit, and then mounted it to the mast canister at the base of one of the existing P4 solar arrays.

"Construction work!" Pesquet exclaimed, as he and Hoshide began the erector-set-like assembly of the bracket's first parts.

The kit prepared the site for the future installation and deployment of the third of six new International Space Station Roll-Out Solar Arrays (iROSAs). The array will upgrade one of the station's eight power channels, known as 4A, which provides partial power to the U.S. Destiny lab, the Harmony node and European Columbus module.

A future spacewalk will add the P4/4A IROSA, itself, after its delivery to the space station by a SpaceX Dragon cargo flight in 2022.

The station's original solar arrays have begun to show signs of degradation as they reach and surpass their 15-year service life. The new roll-out solar arrays will be capable of increasing the station's electricity supply by 20 to 30 percent.

The same IROSA design is planned to power the elements of NASA's Gateway, a lunar orbit outpost being developed by the agency's commercial and international partners.

After completing the mod kit's installation, Hoshide and Pesquet replaced a floating point measurement unit, a device used to measure the electrical charging potential of the station's arrays and their associated surfaces in its vicinity. Hoshide also removed and replaced a "pip pin" used to secure the airlock hatch.

With the scheduled tasks of the EVA achieved, the two astronauts returned to the airlock to enter the space station. The spacewalk ended at 3:09 p.m. EDT (1909 GMT) when re-pressurization of the airlock began.

Hoshide and Pesquet's activities during the spacewalk were filmed using a special virtual reality (VR) camera as part of the ISS Experience, an ongoing immersive production by Felix & Paul Studios in association with TIME. The custom 3D, 360-degree space camera was positioned during the EVA by ground controllers using the station's Canadarm2 robotic arm.

The VR footage from the spacewalk will be returned to Earth on SpaceX's CRS-23 Dragon in late September.

NASA originally intended to conduct this spacewalk in August with Hoshide and U.S. astronaut Mark Vande Hei. Pesquet was added to the EVA team after Vande Hei suffered a pinched nerve in his neck. Still recovering, Vande Hei supported the spacewalk from inside the station.

All U.S. operating segment (USOS) crew members, including NASA, JAXA and ESA astronauts, are trained equally so spacewalker pairings usually hinge on the make up of the station's crew at any given time, said NASA's deputy manager for the International Space Station Program, Dana Weigel.

"The complement of crew members always has more NASA crew members, so just statistically speaking, it makes sense that you usually end up with a NASA crew member," said Weigel in a pre-spacewalk briefing. "There is no requirement for that and that's certainly not a ground rule for planning."

With the inclusion of an additional crew member on U.S. commercial crew flights, such as the Crew Dragon on which both Hoshide and Pesquet arrived in April, the chances of another international partner spacewalk has increased, said Weigel. 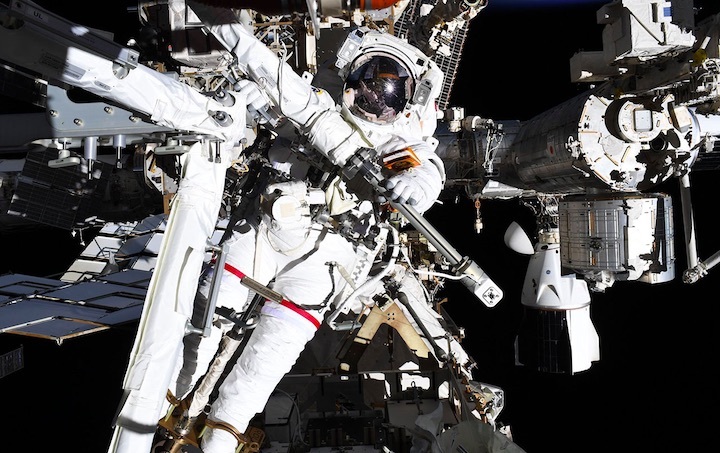 Aki Hoshide with JAXA (Japan Aerospace Exploration Agency), as photographed by ESA astronaut Thomas Pesquet, works at the base of one of the International Space Station's solar arrays during a spacewalk on Sunday, Sept. 12, 2021. (ESA)
"Now that we have four USOS crew members on board — whereas when we were flying on [Russia's crew spacecraft] Soyuz we only had three — we have a higher likelihood of seeing something like this again," she said.

Prior to Sunday's all-international EVA, 14 astronauts from either ESA, JAXA or the Canadian Space Agency have joined an American crew member on a total of 37 spacewalks. Hoshide and Pesquet's outing was the 244th spacewalk in support of assembly and maintenance of the International Space Station. 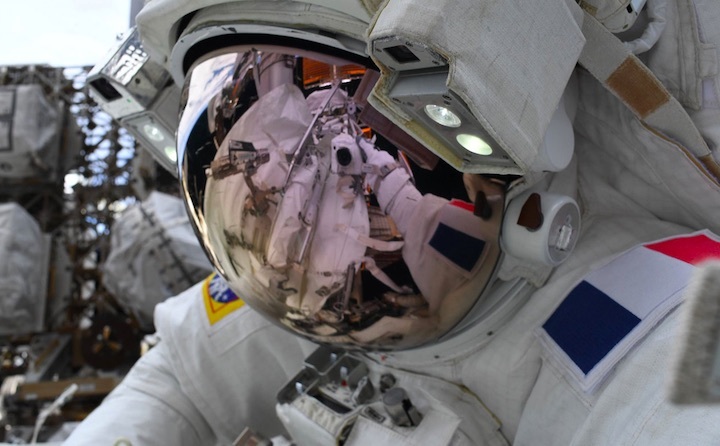 European Space Agency (ESA) astronaut Thomas Pesquet takes a selfie during a spacewalk outside of the International Space Station on Sunday, Sept. 12, 2021. (ESA)
Hoshide served as extravehicular crew member one (EV1) and wore a spacesuit with red stripes. Pesquet was EV-2 wearing an unmarked suit. This was the fourth spacewalk for Hoshide and the sixth for Pesquet.