The United States has a long history of employing advanced technology in war. In that tradition, the U.S. Air Force is developing hypersonic weapons that can maneuver to evade interception while flying five-times faster than the speed of sound. 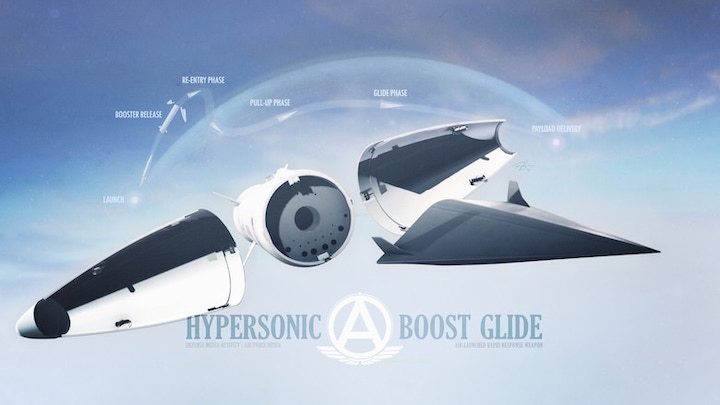 Technical surprise is the unique advantage of introducing a weapon system never before seen on the battlefield.

In the early 1800s, the U.S Navy’s original six frigates were a generation ahead of any ship on the ocean, capable of overpowering any French or British frigate but also fast enough to evade any ship in any navy.

Years later, in the skies over Baghdad, the world witnessed the capabilities of stealth technology and precision-guided munitions which rendered Iraq's Russian-supplied air defense systems ineffective. Today, there is a new capability on the rise ― hypersonics, but the  U.S. is racing to avoid being the one technologically surprised on the battlefield.
Air Force Chief of Staff Gen. Charles Q. Brown, Jr. has clearly stated in his Action Orders that all Airmen must understand Chinese and Russian objectives, mindset, and warfare methods.

One of those peer objectives is developing hypersonic weapons that can maneuver to evade interception while flying five-times faster than the speed of sound.
As the Air Force endeavors to “design and field the future force we need,” it elicits support from industry partners and Congress to quickly and aggressively pursue hypersonic technologies to maintain superiority over peer adversaries in a high-end fight.

These new weapons will excel in the conventional theater missions and are not being pursued for nuclear or intercontinental missions.

Hypersonic weapons provide a survivable, lethal, long-range strike capability to go after high-end capabilities of a potential adversary, such as deep-inland strike against targets of strategic importance and coastal strike against high-end systems.

With the ability to travel at more than a mile a second and steer away from threats, these new weapon systems will be almost impossible to intercept.

Hypersonic missiles dramatically compress the time scale of the theater fight. For example, suppose a target is very heavily defended with a high-end integrated air defense system, or IADS. In that case, hypersonic strike systems allow the U.S. to rapidly take out that IADS from long range with highly survivable, lethal effects, according to Dr. Mark J. Lewis, the former deputy under-secretary of defense for research and engineering.

According to NASA, anything that flies at more than Mach 5, or five times the speed of sound, is traveling at hypersonic speeds.

The two kinds of hypersonic vehicles being researched today are glide vehicles and air-breathing vehicles.

A glide vehicle is launched from a conventional rocket to the upper atmosphere. Once it reaches hypersonic speeds, the vehicle separates from the rocket and glides to its target at speeds up to Mach 15. At these speeds, there is no need for a conventional warhead; the kinetic energy alone delivered during impact would be enough to destroy most targets.

An example of this type of weapon is the U.S. Air Force’s hypersonic AGM-183A Air-launched Rapid Response Weapon (ARRW).

“The ARRW program has been pushing boundaries since its inception and taking calculated risks to move this important capability forward,” said Brig. Gen. Heath Collins, the Air Force’s program executive officer for its armaments directorate.

The goal of the program is to deliver a conventional hypersonic weapons capability to the warfighter in the early 2020s.

An air-breathing hypersonic vehicle uses a rocket booster to reach supersonic speed. It then separates from the rocket and turns on a new type of engine called a Supersonic Combustion Ramjet, or scramjet propulsion system, to maintain hypersonic speed throughout the flight.

Scramjet propulsion uses air in the atmosphere, entering the air intake at supersonic speeds because of the initial rocket booster, which creates propulsion when it is mixed with fuel and ignited. There are no moving parts in a scramjet engine.

When it comes to which technology to use, Lewis says both have unique advantages. Boost-glide tends to go farther, while an air-breather can be adapted to different mission sets.

"If someone can sink an aircraft carrier or render an airfield unusable with a tactical hypersonic system, then they produce the effect that in some ways is equivalent to using a strategic system,” Lewis said.

The ability to travel anywhere in the world in under two hours would change military logistics forever. It could also prove to be a much safer and cheaper alternative to reaching outer space.

Reaching hypersonic speeds is nothing new; anything that travels out of the earth's atmosphere or back to earth from space travels at hypersonic speeds. The trick is achieving and maintaining those speeds while solely in the atmosphere.

The concept is nothing new, and Americans have been researching, testing and developing the capability for decades.

"Hypersonics is a field that was invented basically in the United States. We flew the first hypersonic systems in the late 1940s. The concepts for hypersonic vehicles were pretty much developed here," Lewis said.

Some of the significant milestones in hypersonics happened in the last 20 years when NASA flew the X-43 at Mach 7 and Mach 10 with a scramjet.
In 2013, the U.S. Air Force broke the world record for flying a hypersonic vehicle, the X-51, for 210 seconds.

Today the U.S. is faced with many other countries that recognized, early on, the benefits of fielding a hypersonic weapon. Both Russia and China have made no secret of their investment in hypersonic technology.

However, Lewis is confident that the U.S. will come out on top thanks to its relationship with industry, academia and the military.

"One of the goals that we have in our Office of the Undersecretary of Defense for Research and Engineering is to first make sure that we're not left behind, but more importantly, we're going to leapfrog those capabilities,” Lewis said.

“We'll do it because this is an area we invented…We've got the most innovative minds. We've got the longest history in this field. We've made the investments, not just in the facilities, but in the people. This is something that we're right now focused on ramping up the industrial base workforce, making sure that the services are on track to not only meet but to exceed what peer competitors could possibly deliver."

The forefront of that research is the Air Force's Arnold Engineering Development Complex at Arnold Air Force Base, Tennessee. AEDC operates test units with capabilities unmatched elsewhere in the United States. Some are unique in the world.

With more than 40 hypersonic test flights planned in the years to come, the Air Force is confident in leapfrogging the capabilities of their competitors and avoiding being on the receiving end of a technical surprise.
Quelle: Airman Magazin
Luftfahrt - Hypersonics: Adding Speed to the Quiver
« Zum vorherigen Eintrag Zum nächsten Eintrag »
287 Views
Created with page4