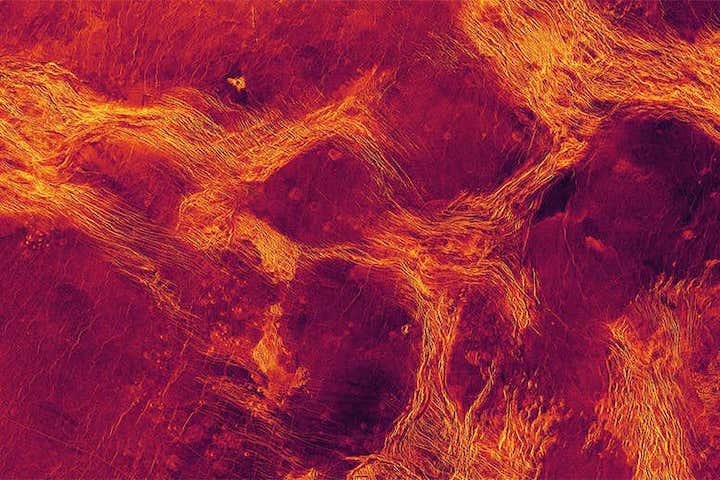 Parts of Venus’s surface are made up of huge blocks that move like pieces of continent on Earth. Some of them may still be moving, and they could help us understand ancient Earth.

Paul Byrne at North Carolina State University and his colleagues used data from the Magellan spacecraft, which orbited Venus from 1990 to 1994, to build a map of surface structures which they have named campi.

They included 58 campi, but Byrne says there are probably more that aren’t quite as obvious. These structures are huge blocks of planetary crust, some just 100 kilometres across and others more than 1000 km, each bounded by belts of ridges and grooves.

The researchers then used computer models of Venus’s internal activity to figure out how these campi formed, and found that it was probably because of molten rock churning under the planet’s surface, generating strain and cracks in the crust.

The way these blocks appear to have moved since their formation is similar to how pieces of the continental crust jostle and smash together on Earth.

“It is stuff moving on the surface because of stuff moving in the interior, and we pretty much don’t see that anywhere else in the solar system except for Earth,” says Byrne. “Add this to the pile of circumstantial reasons why we think Venus is currently geologically active.”

Because the flow of heat inside Venus is similar to how it may have been on Earth during the Archaean era – the period from about 2.5 billion to 4 billion years ago when life began – this phenomenon on Venus could be used as a proxy for studying the geology of ancient Earth.

Two of the three missions due to visit Venus in the coming decades will carry radar instruments that will help build detailed maps of the surface. These will revolutionise our understanding of Venus and its geology, including campi.

Comparing those new maps with the ones from Magellan may also reveal whether campi formed long ago or if they are still moving and evolving.