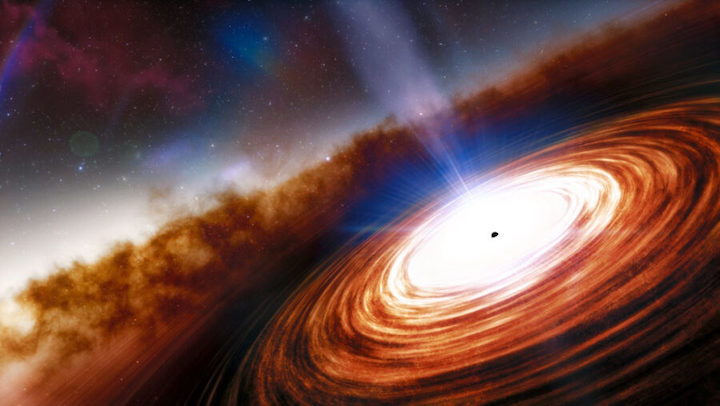 The black hole is moving at 100 kilometers per second (220,000 mph) relative to its host galaxy. It’s also moving 50 km/s with respect to the gas and stars within 100 light-years around it. And oddly enough, the gas and stars themselves seem to be out of whack with galactic material that's farther out.

The host galaxy is a barred spiral 220 million light-years away, and at first glance there’s nothing out of the ordinary about it. But it’s the only one of 10 galaxies that Dominic Pesce (Center for Astrophysics, Harvard & Smithsonian) and colleagues pegged as being a bit peculiar. They were using the galaxies’ megamasers, bright sources of radio emission orbiting within a third of a light-year of the black hole, to track the motion of the black hole itself. And all of the galaxies but this one were at rest with respect to their hosts.

So Pesce’s team followed up, both to confirm the find and find out what had made the black hole so restless. They observed the host galaxy, designated J0437+2456, with Gemini North on Mauna Kea, Hawai‘i. Using near-infrared spectroscopy, they detected the motions of stars and gas within 100 or so light-years of the black hole.

The team also used the Arecibo Observatory (in early 2019, before its cataclysmic end last year) to image neutral hydrogen gas in the larger galaxy. These data showed the black hole wasn’t only moving with respect to the host and with respect to the stars and gas around it, but that the inner material itself was in motion relative to the galaxy at large. These observations will appear in a future issue of Astrophysical Journal (preprint available here).

The explanation for all of these disturbances seems clear: J0437 has recently merged with another, smaller galaxy, both of them likely bringing their own central black holes to the union.

But what stage the merger's in is still up for debate. The black hole could just be falling into the galaxy. Or it could be orbiting another, quieter (and therefore as-yet undetected) supermassive black hole. Or perhaps the two dark behemoths have already coalesced, and the merger resulted in recoil motion. The current data can’t yet distinguish between the options. 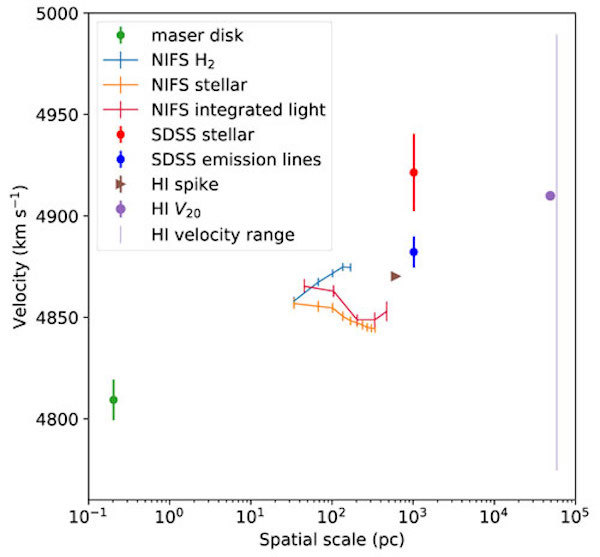 The black hole of J0437+2456 is in motion (green) with respect to other parts of the galaxy, including nearby stars and gas (red, orange, and blue) as well as neutral hydrogen gas that's farther out (brown and purple). The x-axis represents distance from the black hole, plotted logarithmically, and given in parsecs, where 1 parsec is equivalent to 3.3 light-years. Note that the whole galaxy has a rather fast velocity due to its distance from Earth and the expansion of space in between, but it's the differences between the different components within the galaxy that's intriguing astronomers.
D. Pesce et al. / Astrophysical Journal

“The binary or recoiling scenarios are more likely than the infalling one, because we see the black hole at the very center of the galaxy, which would be quite unlikely if it were just infalling from a merger,” Pesce says. “Personally, I think the most exciting scenario would be if J0437+2456 turns out to be hosting a binary black hole system.”

“If the black hole we see turns out to be part of a binary system,” Pesce adds, “then the existence of a second black hole could plausibly provide an additional observational handle on the system.” Extremely high-resolution radio observations, such as from Very Long Baseline Interferometry, could detect emission from another supermassive black hole in the system — if it’s there.