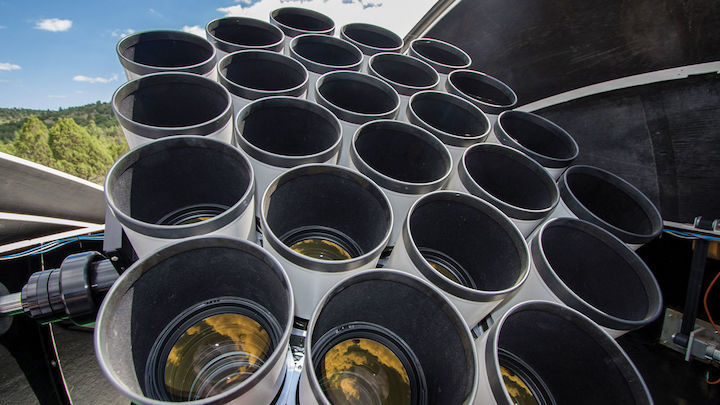 Improving on a Dutch invention, Galileo Galilei in 1609 used glass lenses to build the first telescope capable of studying the night sky. But soon after Isaac Newton constructed the first reflecting telescope later that century, mirrors took over: Astronomy today is dominated by telescopes with giant mirrors up to 10 meters wide.

Galileo’s approach has made a comeback with Dragonfly, a telescope in New Mexico built from two fly-eye arrays of 24 Canon telephoto lenses. This month, the Dragonfly team announced it would add 120 more of the lenses in a $3.65 million upgrade, which will make it the largest lens-based telescope in the world in terms of light-gathering power. With a field of view far greater than that of an equivalent reflecting telescope, Dragonfly promises to capture the dim glow of vast, tenuous gas clouds that hold clues to the universe’s unseen dark matter. “Dragonfly is going to provide a completely new view of the universe,” says team member Deborah Lokhorst of the University of Toronto (UT).

Large telescope mirrors excel at gathering photons from the distant universe and zooming in on particular objects with sharp resolution. But they tend to have small fields of view, and scattered starlight from internal reflections can swamp the faint signals from extended structures like diffuse nebulae.

A decade ago, astronomers Roberto Abraham of UT and Pieter van Dokkum of Yale University realized that an array of dozens of commercial telephoto lenses could gather as much light as a 1-meter telescope while maintaining the lenses’ wide fields of view. Moreover, Canon had just produced a 14-centimeter-wide lens with a special coating to reduce scattered light. By pointing all 48 lenses at the same part of the sky and stacking their exposures, Abraham, van Dokkum, and their colleagues could find dim objects that were hiding in plain sight. “Dragonfly is a very interesting project,” says Joop Schaye, a Leiden Observatory astronomer. “The low–surface-brightness universe has long been neglected.”

So far, Dragonfly’s main claim to fame has been the discovery of numerous ultra-diffuse galaxies (UDGs), some of them as large as the Milky Way, but with hardly any stars. In 2016, the team discovered one that is spinning far faster than it should, given how few stars there are to hold the galaxy together by gravity. That suggested that fully 98% of its mass must be in the form of dark matter, the mysterious stuff that, on average, constitutes some 85% of all gravitating mass in the universe.

In 2018, the Dragonfly team discovered the fast-spinning galaxy’s opposite: a galaxy rotating so slowly that it must contain hardly any dark matter at all. “UDGs are very interesting galaxies,” says Reynier Peletier, an astronomer at the University of Groningen who is looking for similar objects with the much larger European VLT Survey Telescope in Chile. “One way or the other, they may hold the key to the mystery of dark matter.” Indeed, van Dokkum says, the contrasting galaxies discovered by Dragonfly are already posing problems for theories that try to explain away dark matter by modifying the laws of gravity.

The new lenses to be added in the next 18 months should allow the Dragonfly team to go after a new target: faint clouds of gas surrounding galaxies. These clouds are the dense ends of gaseous filaments that connect far-flung galaxies in a cosmic web, which is thought to have coalesced around regions rich in dark matter. Filters on the new lenses will transmit only the feeble red light of glowing hydrogen or the green glow of ionized oxygen to make these wisps of hot, tenuous gas stand out more clearly.

The expansion of the universe stretches light from cosmic objects to longer wavelengths, depending on their distance. To let this “redshifted” light pass through, Dragonfly’s filters can be tilted to various degrees. Increasing the light’s path length through the glass also increases the filters’ transmission wavelength—a trick that will extend the reach of the instrument to gas clouds some 100 million light-years away.

The observations will help the team learn how gas flows into galaxies to form new stars, and how stellar explosions blow the gas back into space. They will also help guide efforts to model the properties of the dark matter–laden cosmic web and how galaxies took shape within it.

To map the much fainter filaments of the cosmic web that lie farther from the galaxies, Abraham dreams of expanding Dragonfly to a 2000-lens array, giving it the same light-gathering power as a 6-meter telescope. “It’s not crazy,” he says. “Dragonfly could well be the first example of a completely new class of optical telescope.”