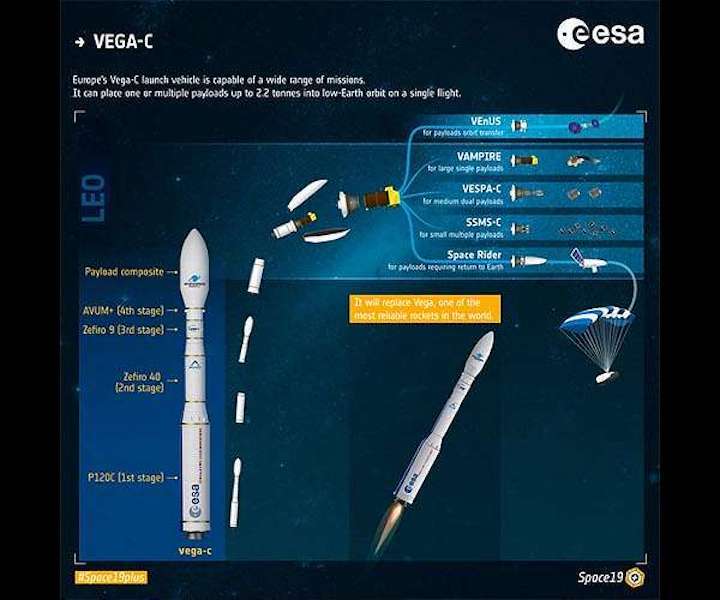 During the recent meeting in Rome between Bruno Le Maire, French Minister of the Economy, Finance and Recovery, and Giancarlo Giorgetti, Italian Minister of Economic Development, Arianespace announced the signature of an agreement with Avio to start production of 10 new Vega C launch vehicles.

This agreement kicks off the procurement of long lead-time items and the initial activities for the production of 10 new launchers, to be delivered from 2023.

Arianespace has signed an agreement with Avio, industrial prime contractor for the Vega and Vega C launchers, to start production of a batch of ten new Vega C rockets, to be launched as from 2023.

"Arianespace is delighted to have signed this agreement with our long-standing partner Avio, confirming the ramp-up of Vega C, in particular to meet European government requirements," said Stephane Israel, Chief Executive Officer of Arianespace.

"Through this long-term supply, Arianespace kicks off its order for a fourth batch of Vega launchers, the first comprising only upgraded Vega C launchers. A number of European Earth observation and science programs, most notably Copernicus, will fully benefit from the greater competitiveness of Vega C. More than ever, Vega is establishing its role as the second pillar of Europe's space access capabilities, along with Ariane."

Giulio Ranzo, Chief Executive Officer of Avio, commented: "We are delighted to receive a new batch order for Vega C, which confirms Arianespace's customers' interest and trust in the new launcher product, which is the result of an effective cooperation among several European industries under Avio's leadership".

The agreement was signed in Rome on March 19, 2021 by Stephane Israel, CEO of Arianespace, and Giulio Ranzo, CEO of Avio, during a meeting between Bruno Le Maire, French Minister of the Economy, Finance and Recovery, and Giancarlo Giorgetti, Italian Minister of Economic Development.

Vega C launchers produced within Batch 4 will serve institutional and commercial missions from 2023 onwards; in particular, they will contribute to the fulfillment of strategic objectives selected by European institutions, either collectively through ESA and the European Commission, or for national purposes.

Thus, 2021 will see the contracting by Arianespace of launch services for the next nine Copernicus satellites within the Multiannual Financial Framework 2021-2027 of the European Commission.

Vega C is a new-generation light launcher, perfectly suited to the launch of both commercial and government payloads. Because of its high performance and versatility, Arianespace provides the best possible solution to orbit small and medium spacecraft into a wide range of orbits (Sun- synchronous, ballistic, transfer to the Lagrange point L1, etc.), for Earth observation, science, education, defense and other applications. With Vega C, Arianespace will offer enhanced performance and greater payload volume for future customers at the same price as for launches by Vega.