This is the first 360-degree panorama taken by Mastcam-Z, a zoomable pair of cameras aboard NASA’s Perseverance Mars rover. The panorama was stitched together on Earth from 142 individual images taken on Sol 3, the third Martian day of the mission (Feb. 21, 2021).
Credits: NASA/JPL-Caltech/MSSS/ASU

NASA’s Mars 2020 Perseverance rover got its first high-definition look around its new home in Jezero Crater on Feb. 21, after rotating its mast, or “head,” 360 degrees, allowing the rover’s Mastcam-Z instrument to capture its first panorama after touching down on the Red Planet on Feb 18. It was the rover’s second panorama ever, as the rover’s Navigation Cameras, or Navcams, also located on the mast, captured a 360-degree viewon Feb. 20.

Mastcam-Z is a dual-camera system equipped with a zoom function, allowing the cameras to zoom in, focus, and take high-definition video, as well as panoramic color and 3D images of the Martian surface. With this capability, the robotic astrobiologist can provide a detailed examination of both close and distant objects.

The cameras will help scientists assess the geologic history and atmospheric conditions of Jezero Crater and will assist in identifying rocks and sediment worthy of a closer look by the rover’s other instruments. The cameras also will help the mission team determine which rocks the rover should sample and collect for eventual return to Earth in the future.

Stitched together from 142 images, the newly released panorama reveals the crater rim and cliff face of an ancient river delta in the distance. The camera system can reveal details as small as 0.1 to 0.2 inches (3 to 5 millimeters) across near the rover and 6.5 to 10 feet (2 to 3 meters) across in the distant slopes along the horizon.

“We’re nestled right in a sweet spot, where you can see different features similar in many ways to features found by Spirit, Opportunity, and Curiosity at their landing sites,” said Jim Bell of Arizona State University’s School of Earth and Space Exploration, the instrument’s principal investigator. ASU leads operations of the Mastcam-Z instrument, working in collaboration with Malin Space Science Systems in San Diego.

The camera team will discuss the new panorama during a question and answer session at  4 p.m. EST Thursday, Feb. 25, which will air live on NASA Television and the agency’s website, and will livestream on the agency’s Facebook, Twitter, Twitch, Daily Motion, and YouTube channels, as well as the NASA app. Speakers include:

Mastcam-Z’s design is an evolution of NASA’s Curiosity Mars rover’s Mastcam instrument, which has two cameras of fixed focal length rather than zoomable cameras. The two cameras on Perseverance’s Mastcam-Z dual cameras are mounted on the rover’s mast at eye level for a person 6 feet, 6 inches (2 meters) tall. They sit 9.5 inches (24.1 centimeters) apart to provide stereo vision and can produce color images with a quality similar to that of a consumer digital HD camera.

A key objective of Perseverance's mission on Mars is astrobiology, including the search for signs of ancient microbial life. The rover will characterize the planet’s geology and past climate, pave the way for human exploration of the Red Planet, and be the first mission to collect and cache Martian rock and regolith (broken rock and dust).

Subsequent NASA missions, in cooperation with ESA (European Space Agency), would send spacecraft to Mars to collect these sealed samples from the surface and return them to Earth for in-depth analysis.

The Mars 2020 Perseverance mission is part of NASA’s Moon to Mars exploration approach, which includes Artemis missions to the Moon that will help prepare for human exploration of the Red Planet.

JPL, which is managed for NASA by Caltech in Pasadena, California, built and manages operations of the Perseverance rover.

The first high resolution panorama showing the Perseverance Mars rover's landing site provides a remarkably detailed view of Jezero Crater, including the jagged rim of the crater in the distance and low cliffs marking the edge of an ancient river delta.

The panorama is made up of 142 images captured by the Mastcam-Z camera instrument over the weekend, three days after the rover's dramatic landing.

The zoomable, dual camera system is mounted on a remote sensing mast and is capable of rotating a full 360 degrees to provide panoramic color and 3D images. It is capable of detecting something as small as a house fly across the length of a football field.

"I'm taking it all in," the rover's Twitter account reported Wednesday. "This is the first 360-degree view of my home using Mastcam-Z."

Perseverance landed last Thursday in a crater that once held a body of water the size of Lake Tahoe. Billions of years ago, water entered the crater through a channel cutting through the crater's rim, depositing sediments in a broad delta formation as it filled the crater to a depth of hundreds of feet.

The water vanished some three billion years ago, but the sediments might hold preserved remnants of ancient microbial life. Perseverance was designed to collect promising rock and soil samples that will be deposited on the surface for retrieval by another rover later this decade. The samples then will be launched into orbit for capture by a European spacecraft that will bring them back to Earthfor detailed analysis. 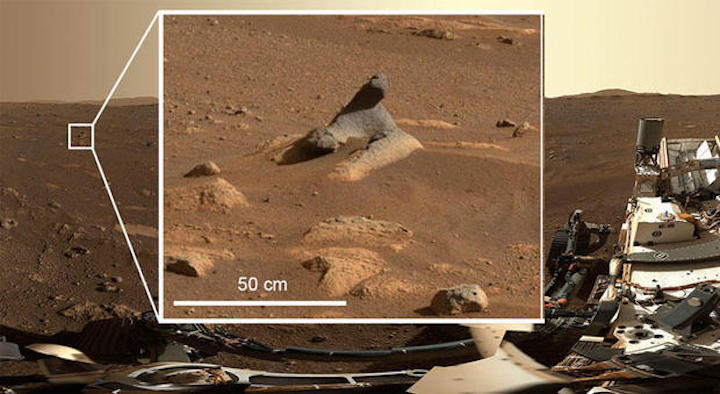 The Mastcam-Z panorama looks out across the floor of the crater, showing Jezero's craggy rim in the distance and eroded cliffs marking the edge of the delta formation. Nearby scouring marks where rocket exhaust plumes hit the surface as Perseverance was being lowered to touchdown by its "sky crane" jet pack.

"We're nestled right in a sweet spot, where you can see different features similar in many ways to features found by (the earlier rovers) Spirit, Opportunity and Curiosity at their landing sites," said principal investigator Jim Bell of Arizona State University. ASU operates Mastcam-Z in collaboration with Malin Space Science Systems in San Diego. 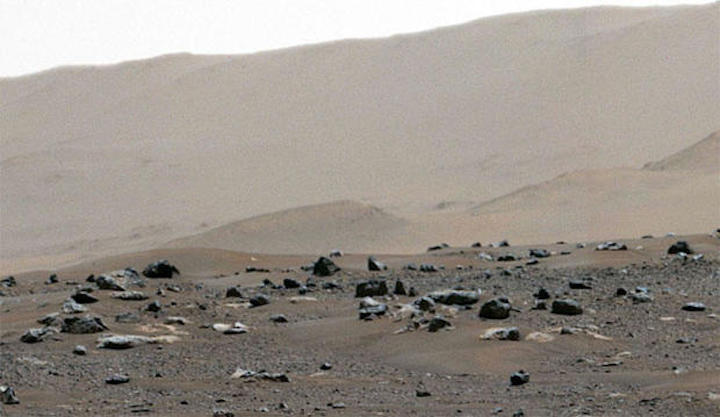 One goal of the initial imaging campaign is to identify relatively flat, boulder-free areas where a small helicopter, still attached to the belly of the rover, can be dropped off for tests to determine if flight in the thin martian atmosphere is feasible.

Initial test flights are expected in about two months.

The Mars rover Perseverance is packed with hidden messages. Can you find them?

Get out your decoder ring because NASA has revealed the Mars rover Perseverance, which landed on the Red Planet last week, is packed with codes and hidden messages.

The spacecraft is equipped with technology to search for ancient signs of life on Mars including ground-penetrating radar, an ultra-violet laser and advanced camera systems.

But it’s not all serious science stuff at Jet Propulsion Laboratory, where the rover was built.

Turns out their engineers like to have a little fun too.

“Sometimes we leave messages in our work for others to find for that purpose,” said Al Chen, head of JPL’s entry, descent and landing team. “So we invite you all to give it a shot and show your work.” 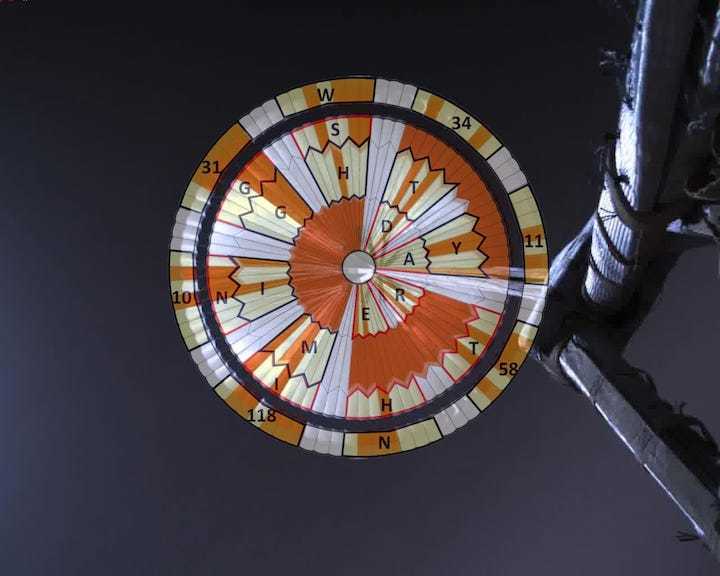 It didn’t take long for amateur code breakers to find a really big one.

The massive 70 foot wide parachute made of nylon and Kevlar that was used to slow the spacecraft from 12,000 mph to 2mph so it could land safely carried a message in the pattern of the chute.

Dr. Ian Clark, who heads up the supersonic parachute program, used a binary code to spell out JPL’s motto “Dare Mighty Things” in the orange and white stripes of fabric.

The outer ring of the parachute gives the geographic coordinates of JPL’s location in California possibly in case any Martians need a return address to send their message. 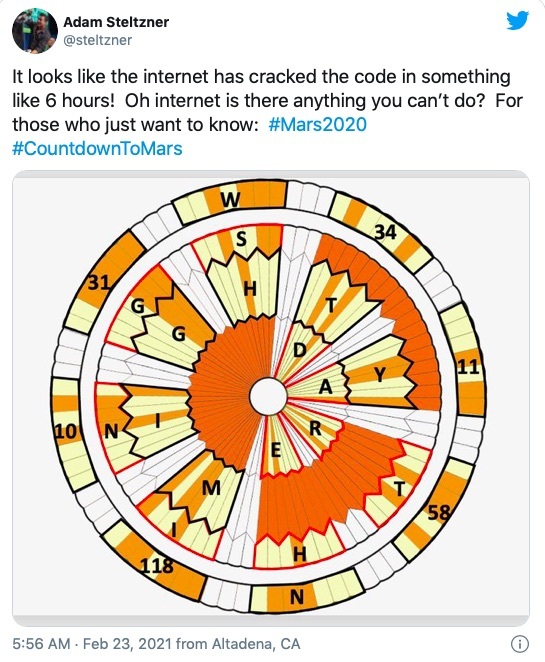 To acknowledge Perseverance’s younger siblings, engineers also included an image on the deck of the spacecraft of all the rovers. In a nod to those family stickers seen on the rear window of a car, the depiction shows Sojourner, Spirit, Opportunity, Curiosity, Perseverance and Ingenuity -- the helicopter created to take the first flight on another planet. 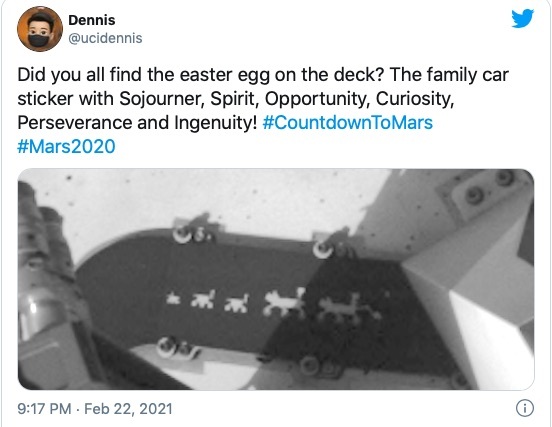 That’s not all.  A plaque that will be used to calibrate one of the rover’s cameras includes an message for whoever or whatever finds it:

“Are we alone? We came here to look for signs of life, and to collect samples of Mars for study on Earth. To those who follow, we wish a safe journey and the joy of discovery.” 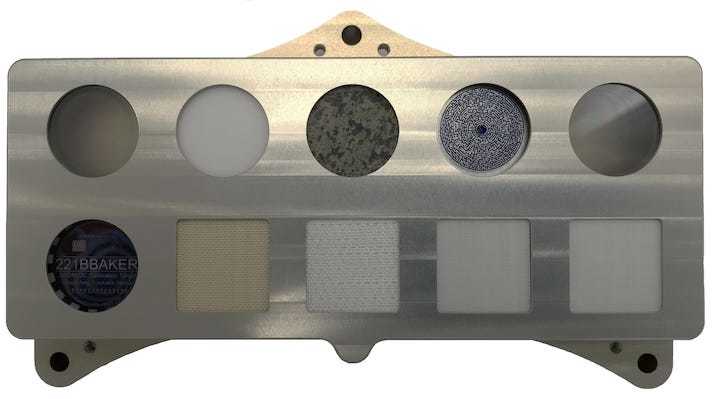 As a robotic sleuth searching for signs of microbial life, Perseverance is also equipped with an instrument called SHERLOC, a spectrometer that will use an ultra-violet laser to determine minerals and detect organic compounds. Inscribed on the lower left of the calibration target is “221B BAKER” the address of Sherlock Holmes from the mystery series by Arthur Conan Doyle.

If you missed finding these clues, don’t worry there are more surprises to come.

As NASA continues to share images and video of Perseverance carrying out its mission, take a closer look and see what you can find.

Wee dots show where the rover and spacecraft parts hit the ground. 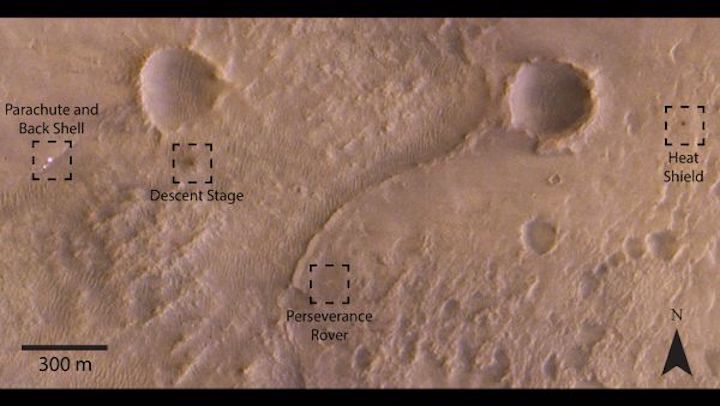 The ESA-Roscosmos Trace Gas Orbiter has spotted NASA's Mars 2020 Perseverance rover, along with its parachute and back shell, heat shield and descent stage, in the Jezero Crater region of Mars. (Image credit: Copyright ESA/Roscosmos/CaSSIS; acknowledgement A. Valantinas)

NASA's Perseverance rover has been spotted on the Martian surface by a camera high overhead, on the ExoMars Trace Gas Orbiter.

On Feb. 23, the orbiting ExoMars, a joint mission of the European Space Agency (ESA) and Russia's Roscosmos State Corporation for Space Activities, captured an image of Mars showing a tiny, pale dot — Perseverance — on the ground far below. Released by the ESA on Feb. 25, the image also shows the rover's jettisoned parachute and backshell, the heat shield and the rocket-powered descent stage, all of which were critical for Perseverance's safe touchdown on Feb. 18.

ExoMars also played a part in Perseverance's harrowing landing in Jezero Crater, relaying important data back to Earth that showed the rover's progress, ESA representatives said in a statement.

The ESA-Roscosmos orbiter arrived at Mars five years before Perseverance, on Oct. 19, 2016. Its scientific instruments sample and analyze molecules in the Martian atmosphere, so that scientists can better understand how atmospheric gases that appear in very small quantities, such as methane, may signal biological or geological activity on distant planets, according to the ESA.

ExoMars also carries cameras, and its Colour and Stereo Surface Imaging System (CaSSIS) photographed Perseverance from an altitude of approximately 249 miles (400 kilometers). The image is a snapshot of all the stages that took Perseverance through its descent, after the spacecraft shed its cruise stage.

The backshell, a small white dot in the far left of the photo, fired small thrusters during the initial descent to keep Perseverance on course, according to NASA. Next to the backshell in the image is another white dot: Perseverance's parachute. It deployed when the rover slowed to less than 1,000 mph (1,600 km/h). Once the parachute opened, the heat shield separated and dropped to the ground; that shield is visible in the photo as a dark speck on the far right.

"The orbiter will continue to provide data-relay support between Earth and Mars for NASA's surface missions," the ESA statement said. ExoMars will also play a supporting role when the European Rosalind Franklin rover and the Russian Kazachok surface platform get to Mars in 2023.

As Elton John sang in "Rocketman," it's lonely out in space. But on Mars, at least, our robotic ambassadors on the ground and in orbit can keep their "eyes" on each other.