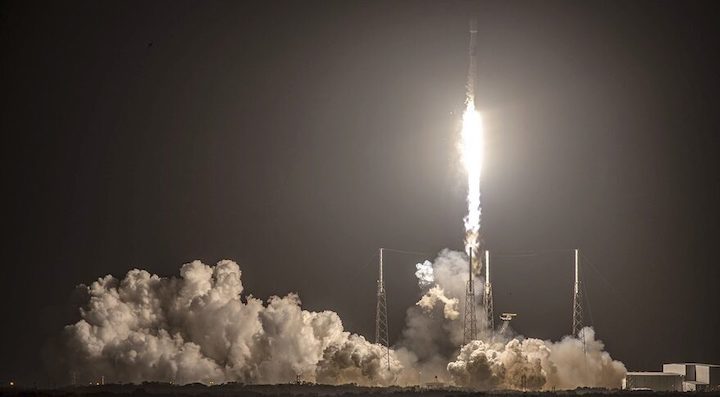 WASHINGTON — A Falcon 9 booster failed to land after its most recent launch Feb. 15 because of “heat damage” it sustained, but a SpaceX official said he was confident that the boosters can be reused 10 or more times.

During a session of the 47th Spaceport Summit Feb. 23, Hans Koenigsmann, senior adviser for build and flight reliability at SpaceX, said the failed landing during an otherwise successful launch of Starlink satellites remains under investigation.

“This has to do with heat damage, but it’s a running investigation,” he said, adding that the company was “close to nailing it down” and correcting the problem. “That’s all I can say at this point in time.”

The failed landing broke a string of two dozen successful landings of Falcon 9 boosters, either on droneships or on land, dating back nearly a year. Video from the booster’s return showed that the engines did not shut down normally after the vehicle’s entry burn. The booster never made it to the droneship, and video from that ship showed a glow in the distance around the time the booster should have landed.

SpaceX hasn’t conducted a Falcon 9 launch since that failed landing. The next launch, of another set of Starlink satellites, is scheduled for no earlier than Feb. 28.

Other customers of the Falcon 9 are keeping tabs on the investigation. At a Feb. 19 briefing, Joel Montalbano, NASA International Space Station program manager, said the agency was in discussions with SpaceX about that investigation to see if it involved any issues that could affect the Crew-2 commercial crew launch scheduled for April 20. “As of today, we’re working with them to better understand what happened, and right now it’s just too early to say if we’re going to have any impacts” on that launch, he said.

Another government official saw no issues with the failed landing from a safety perspective. “This is what we call a successful failure,” said Wayne Monteith, associate administrator for commercial space transportation at the Federal Aviation Administration, during the Spaceport Summit panel discussion. “It failed within the safety regime and they protected the public and protected public property.”

“For us, even when a system does not meet all mission goals, as long as it fails safely, in many respects that’s progress,” he added. “Each of these flights demonstrates something new and allows industry to move forward.”

The booster that failed was on its sixth launch. SpaceX has flown boosters up to eight times each, and Koenigsmann said the company will launch a booster for a ninth time in a few weeks. SpaceX has set a goal of being able to fly each booster 10 times.

That is not a hard limit, though, Koenigsmann said. “We’re learning a lot about refurbishment and we’re learning where the areas are where we need to pay attention to,” he said, such as the booster’s heat shield and engine components. “We’ve been learning with every single landing.”

He expected SpaceX to soon get a booster to the 10-flight mark, but suggested the company would not automatically retire it. “We will continue to look at that booster and make an assessment whether we can move forward with it,” he said, adding that, in his own opinion, the company would continue launching boosters after 10 flights, perhaps replacing some components that wear out.

“To me this is an engineering problem,” he concluded. “I don’t think the number 10 is a magic number.”