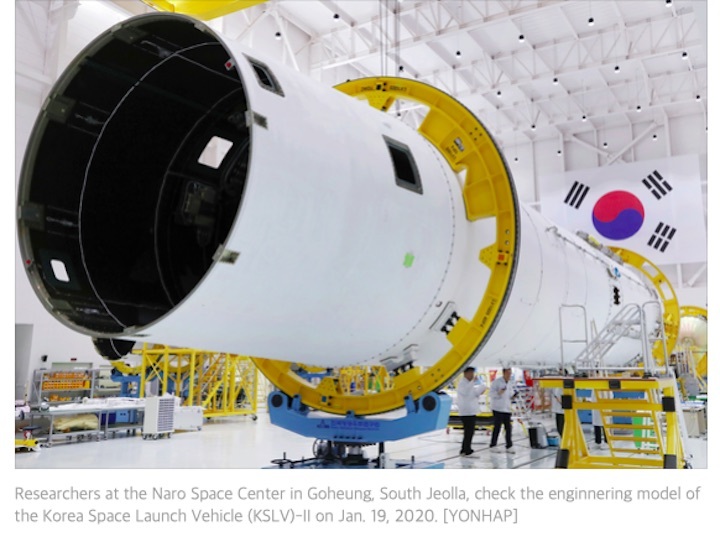 There is a less-covered stock segment that has gained a significant boost entering this year: aerospace.

With 2021 set to become a defining moment for Korea’s aerospace industry thanks to the planned launch of a rocket developed with homegrown technology, investors became bullish about private space companies linked with the project and with the industry in general.

The upturn coincides with a big round of investments into big global players like SpaceX and Blue Origin, highlighting expectations for space exploration and satellite launches at lower cost.

At the center of attention in Korea is Hanwha, the country’s only conglomerate that owns affiliates dedicated to space technology.

The stock price of Hanwha Aerospace, a Kospi-listed aircraft engine producer, jumped 40.4 percent to close at 17,250 won ($15.60) on Friday compared to the beginning of the year.

The Changwon, South Gyeongsang-based unit is in the process of developing an engine for liquid-propellant rockets for the Korea Space Launch Vehicle-II (KSLV-2), also known as Nuri-ho, which is expected to launch in October, this year.

Boasting four 75-ton liquid engines in its first-stage booster, the three-stage rocket is designed to carry a 1.5-ton satellite into low orbit.

Unlike its predecessor the KSLV-I rocket that borrowed Russian technology, the KSLV-2 is billed as being made of components and systems developed in Korea.

Hanwha Aerospace plans to provide other parts including valves and propellant pumps to the Nuri-ho rocket.

The engine supplier moved to scale up its space business portfolio earlier this year by acquiring a controlling stake in Satrec Initiative, a space satellite company that was founded by scientists who participated in the development of Kitsat-1, Korea's first satellite that launched in 1992.

“The acquisition helped Hanwha Aerospace come up with extensive lineups for space business ranging from engines at Aerospace, satellite antennas at Hanwha Systems and launch pads at Hanwha Defense to satellite manufacturing at Satrec Initiative,” said Kim Jong-min, an analyst at Samsung Securities.

Satrec Initiative is also enjoying buoyance as its stock rose 125.7 percent compare to the record on Jan. 4.

Hanwha Systems, a subsidiary of Hanwha Aerospace that develops the components of satellites mainly for military purposes, joined the uptick since it gained 20.6 percent to close at 21,050 won on Friday from the beginning of this year.

A fresh opportunity for Hanwha and other engine developers lies with the lifting of restrictions on solid fuel for rockets last year.

“The eased regulation on the use of solid fuels for launch vehicles under the revised Korea-U.S. missile agreement should put Korean players in a better position to tap the growing satellite market,” said Lee Dae-hwan, an analyst at Daishin Securities.

Vitzro Tech is another beneficiary of the positive outlook for rocket launches as the Kosdaq-listed firm is assigned to provide high-pressure turbopumps and gas generators for the upcoming project.

Its stock went up 19.6 percent as of Friday compared to the first trading day in 2021.

Those companies could likely receive policy support since the government has committed sizable budget on space programs for this year.

The government will spend 615 billion won on space programs and 189.7 billion won will go to the launch of KSLV-2.
Quelle: Korea JoongAng Daily