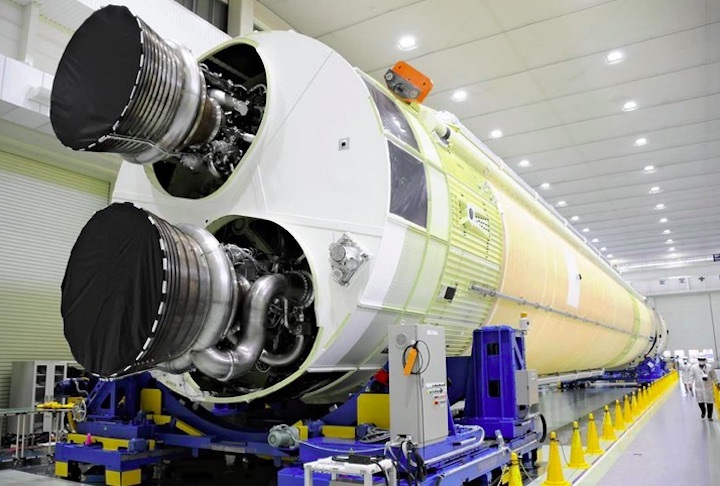 The fuselage sections of the H-3 rocket are shown to the press on Saturday at Mitsubishi Heavy Industries’ Tobishima plant in Aichi Prefecture.

The first next-generation H-3 rocket is nearing completion, developed as the successor to the H-2A and H-2B.

The rocket’s fuselage sections were shown to the press on Saturday at Mitsubishi Heavy Industries Ltd.’s Tobishima plant in Tobishima, Aichi Prefecture. It is scheduled to be transported by ship to Tanegashima Space Center in Kagoshima Prefecture a early as this month, with the aim of launching it in fiscal 2021.

The H-3 is being jointly developed by the Japan Aerospace Exploration Agency (JAXA), Mitsubishi Heavy Industries and other entities. They unveiled on Saturday the 37-meter-long first stage section and the 12-meter-long second stage section of the rocket, both of which will carry engines and fuel including hydrogen.

The fuselage was enlarged to 5.2 meters in diameter — 30% larger than that of the H-2A — to increase the propulsive power.

The developers are aiming to reduce the cost of each launch to about ¥5 billion, about half that of the H-2A, and to increase orders from satellite operators in Japan and abroad, as well as from the government. The word “Nippon” was written on the side of H-2A and H-2B rockets, but this was changed to “Japan” for the H-3. 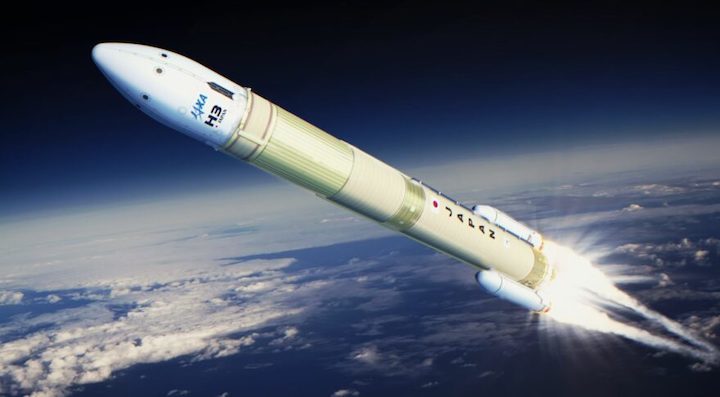 HELSINKI — The Japan Aerospace Exploration Agency is moving ahead with testing of its new H3 rocket as it seeks to replace its aging flagship H-IIA launch vehicle.

The first stage of the 5.2-meter-diameter H3 launcher was unveiled to press at Mitsubishi Heavy Industries’ Tobishima plant in Aichi Prefecture Jan. 24.

The core stage is being transported to Tanegashima Space center for a series of tests beginning in February as part of preparations for eventual launch.

Comprehensive system tests and vital certification tests of the LE-9 liquid hydrogen-liquid oxygen engines—issues with which have brought delays— will be conducted at the launch site, JAXA told SpaceNews in an email.

A wet dress rehearsal is planned for March, when the launcher will be loaded with cryogenic propellant, simulating the work leading up to a launch. JAXA will then carry out various tests until launch according to an appropriate schedule.

JAXA says the launch date of the first H3 will be “decided after coordination with the development status of the onboard satellite and related organizations.” 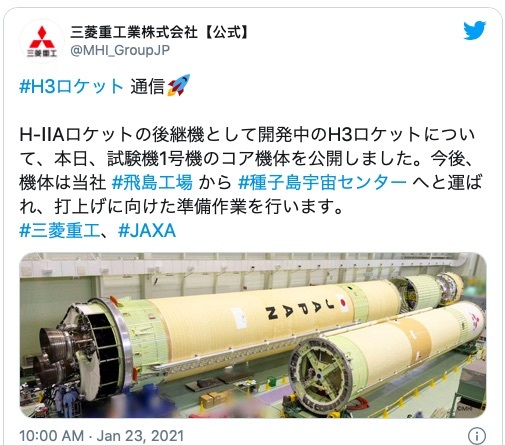 JAXA last fall announced the H3 had slipped from Japanese Financial Year 2020 to 2021, the latter of which begins April 1 of 2021. The delay is due to problems discovered with the new LE-9 engine’s combustion chamber and turbopump.

JAXA is now working on LE-9 certification having found fatigue fracture surfaces in the combustion chamber and turbopump blades. “We have been conducting technical data acquisition tests and turbo pump blade vibration tests as the previous stage in Tanegashima and Kakuda since last year. We will continue this effort,” JAXA stated.

H3 is intended to fully replace the older, active H-IIA rocket after 2023. It is stated to be designed for high flexibility, high reliability, and high cost performance.

Four configurations of the H3 are to be possible, each featuring two or three LE-9 engines and optional solid side boosters. The largest, 63-meter-long, 574-ton configuration is to be capable of lifting more than 7,900 kilograms to geosynchronous transfer orbit. Upgraded variants may be introduced in the future for lunar missions.

A cosmetic change is also coming with H3, dropping the “NIPPON” seen on the side of the current H-II rockets. “One of the purposes of developing the H3 rocket is to improve international competitiveness. We adopted the notation “JAPAN” from the perspective of global appeal,” JAXA said.