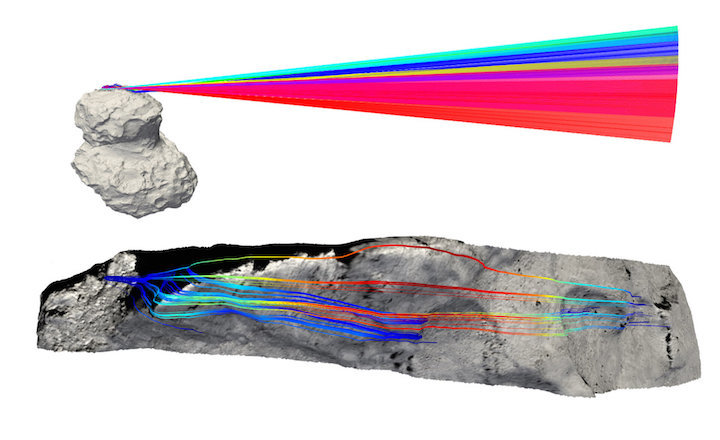 A permeable heart with a hardened facade –the resting place of Rosetta’s lander on Comet 67P/Churyumov-Gerasimenko is revealing more about the interior of the 'rubber duck' shaped-body looping around the Sun.

A recent study suggests that the comet’s interior is more porous than the material near the surface. The results confirm that solar radiation has significantly modified the comet’s surface as it travels through space between the orbits of Jupiter and Earth. Heat from the Sun triggers an ejection and subsequent falling back of material.

Location, location, location. That was key for the radar instrument on the Rosetta spacecraft and its Philae lander, which was designed to probe the comet’s nucleus. The CONSERT experiment involved two antennas sending precise signals to each other. But when Philae went missing upon landing on November 2014, scientists had to work with estimated values.

Philae operated for over two days on the surface – 63 hours, to be precise.

“We managed to define the region where the lander was with a margin of about 150 m. The real landing site was in this region,” explains Wlodek Kofman, emeritus principal investigator of CONSERT.

It took nearly two years to find out where Philae was. In September 2016 the exact position of Philae was retrieved within the area identified by CONSERT.

Precise 3D models of the comet with Philae in the picture “allowed us to revisit the measurements and improve our analysis of the interior,” says Wlodek.

The graphic shows the signal connecting the CONSERT instrument on Philae, on the surface of the comet, to the one on the Rosetta orbiter. The fan like appearance is a result of the motion of Rosetta along its orbit, with the colours marking the separate signal paths as the orbit evolves.

The image below shows the signals in more detail, propagating inside the comet from Philae to the points from where they leave the comet to the orbiter.  The curving is a result of the projection of its paths on the bumpy surface of the comet.

The bluer colour indicates more shallow paths (just a few centimetres), while the redder tones show where the signals penetrated below 100 m in depth.

The time for the signal to travel between the two radars offers insights into the comet’s nucleus, such as porosity and composition. The team discovered that rays propagated at different velocities, indicating varying densities within the comet.

The discussion is still open, but Wlodek believes that “this strongly suggeststhat the less dense interior has kept its pristine nature.” Known as the most primitive objects in our cosmic neighbourhood, comets might hold, deep inside, valuable clues about the formation of our Solar System.

The interior of Comet 67P/C–G; revisiting CONSERT results with the exact position of the Philae lander

CONSERT, a bistatic radar onboard the Rosetta spacecraft and its Philae lander, was designed to probe the nucleus of comet 67P/Churyumov–Gerasimenko with radio waves at 90 MHz frequency. In 2016 September, the exact position of Philae was retrieved, within the region previously identified by CONSERT. This allowed us to revisit the measurements and improve our analysis of the properties of the interior, the results of which we present here. The relative permittivity of the materials is found to range from about 1.7 to 1.95 in the shallow subsurface (<25 m) and about 1.2 to 1.32 in the interior. These differences indicate different average densities between the shallow subsurface and the interior of comet. They can be explained by various physical phenomena such as different porosities, the possible compaction of surface materials, or even perhaps different proportions of the same materials. This strongly suggests that the less dense interior has kept its pristine nature.

After years of detective work, the second touchdown site of Rosetta’s Philae lander has been located on Comet 67P/Churyumov-Gerasimenko in a site that resembles the shape of a skull. Philae left its imprint in billions-of-years-old ice, revealing that the comet’s icy interior is softer than cappuccino froth.

Philae descended to the surface of the comet on 12 November 2014. It rebounded from its initial touchdown site at Agilkia and embarked on a two-hour flight, during which it collided with a cliff edge and tumbled towards a second touchdown location. Philae eventually came to a halt at Abydos, in a sheltered spot that was only identified in Rosetta imagery 22 months later, a few weeks before the conclusion of the Rosetta mission.

ESA’s Laurence O’Rourke, who played the leading role in finding Philae in the first instance, was also determined to locate the previously undiscovered second touchdown site.

“Philae had left us with one final mystery waiting to be solved,” says Laurence. “It was important to find the touchdown site because sensors on Philae indicated that it had dug into the surface, most likely exposing the primitive ice hidden underneath, which would give us invaluable access to billions-of-years-old ice.”

Together with a team of mission scientists and engineers, he set about pulling together data from both Rosetta and Philae instruments to find and confirm the ‘missing’ touchdown site.

The star of the show

Although a bright patch of ‘sliced ice’ observed in high-resolution images from Rosetta’s OSIRIS camera proved crucial in confirming the location, it was Philae’s magnetometer boom, ROMAP, that turned out to be the star of the show. The instrument was designed to make magnetic field measurements in the comet’s local environment, but for the new analysis the team looked at changes recorded in the data that arose when the boom – which sticks out 48 cm from the lander – physically moved as it struck a surface. This created a characteristic set of spikes in the magnetic data as the boom moved relative to the lander body, which provided an estimate of the duration of Philae stamping into the ice. The data could also be used to constrain the acceleration of Philae during these contacts. ROMAP’s data were cross-correlated with those collected by Rosetta’s RPC magnetometer at the same time to determine Philae’s attitude and exclude any influence from the background magnetic field of the plasma environment around the comet.

“We weren’t able to make all the measurements we planned in 2014 with Philae, so it is really amazing to use the magnetometer like this, and to combine data from both Rosetta and Philae in a way that was never intended, to give us these wonderful results,” says Philip Heinisch, who led the analysis of the ROMAP data.

A reanalysis of the touchdown data found that Philae had spent nearly two full minutes at the second touchdown site, making at least four distinct surface contacts as it ploughed across it. One particularly notable imprint revealed in the images was created as Philae’s top surface sank 25 cm into the ice on the side of a crevice, leaving identifiable marks of its drill tower and sides. The spikes in the magnetic field data arising from the boom movement showed that it took Philae three seconds to make this particular depression. “The shape of the boulders impacted by Philae reminded me of a skull when viewed from above, so I decided to nickname the region ‘skull-top ridge’ and to continue that theme for other features observed,” says Laurence.

“The right ‘eye’ of the ‘skull face’ was made by Philae’s top surface compressing the dust while the gap between the boulders is ‘skull-top crevice’, where Philae acted like a windmill to pass between them.”

Analysis of images and data from OSIRIS and Rosetta’s spectrometer VIRTIS confirmed that the bright exposure was water-ice covering an area of about 3.5 square metres. Although the ice was mostly in shadow at the time of the landing, the Sun was directly illuminating the area when the images were taken months later, lighting it up like a beacon to stand out against everything around it. The ice was brighter than the surrounds because it had not been previously exposed to the space environment and undergone space weathering.

“It was a light shining in the darkness,” says Laurence, noting that it was located just 30 m away from where Philae was finally imaged on the comet surface.

While an exciting conclusion in the search for the second touchdown site, the study also provides the first in situ measurement of the softness of the icy-dust interior of a boulder on a comet.

“The simple action of Philae stamping into the side of the crevice allowed us to work out that this ancient, billions-of-years-old, icy-dust mixture is extraordinarily soft – fluffier than froth on a cappuccino, or the foam found in a bubble bath or on top of waves at the seashore,” adds Laurence.

The study also allowed an estimate of the boulder’s porosity – how much empty space exists between the ice-dust grains inside the boulder – of about 75%, which is in line with the value measured previously for the whole comet in a separate study. The same study showed that the comet is homogeneous anywhere in its interior on all size scales down to about one metre. This implies that the boulders represent the overall state of the comet’s interior when it formed some 4.5 billion years ago.

“This is a fantastic multi-instrument result that not only fills in the gaps in the story of Philae’s bouncy journey, but also informs us about the nature of the comet,” says Matt Taylor, ESA’s Rosetta project scientist. “In particular, understanding the strength of a comet is critical for future lander missions. That the comet has such a fluffy interior is really valuable information in terms of how to design the landing mechanisms, and also for the mechanical processes that might be needed to retrieve samples.” “The Philae lander reveals low-strength primitive ice inside cometary boulders,” by O’Rourke et al is published in the journal Nature.

The study used data from Rosetta’s OSIRIS, VIRTIS and RPC-MAG instruments, and from Philae’s ROMAP instrument. Data from Rosetta’s MIRO instrument was also investigated but the instrument footprint was too wide to be able to draw conclusive statements for this study. ‘Shape models’ detailing the topography of the region in higher resolution than had been previously available at the time of landing were essential in gaining a 3D perspective on the region, as was new modelling of Philae’s flight trajectory.

Reanalysis of the ROMAP data shows that the initial contact at touchdown two occurred at 17:23:48 GMT, approximately 1.5 minutes earlier than previously reported. The originally reported time corresponds to the most significant contact made by Philae with the surface, but it is now apparent that Philae struck the surface multiple times during the second touchdown event, and spent around two minutes there.