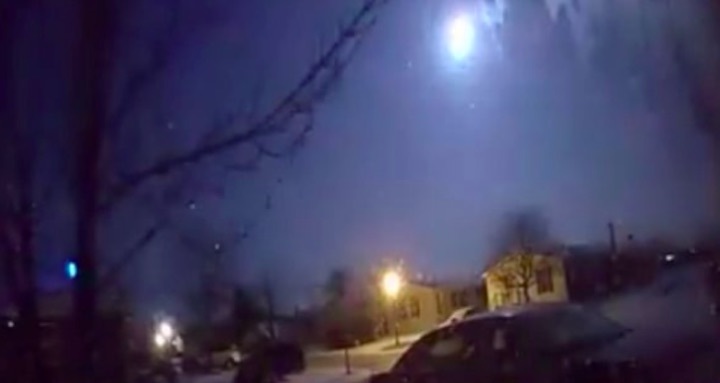 A fireball that struck near Hamburg, Michigan, in 2018 could offer new insights into the history of the solar system, researchers have said.

The fireball – a type of very bright meteor that would even be observed in daylight – was spotted in several states as it flew across the sky on the evening of 16 January 2018; the meteor also produced an atmospheric shockwave equivalent to a magnitude 2.0 earthquake.

Walnut-sized fragments were rapidly recovered from Strawberry and Bass Lakes by meteorite hunters using information from scientists who had been tracking their trajectory using Nasa’s weather radar.

“Finding a pebble-sized fragment on a frozen lake or in a snow blanket is difficult if you don’t know where to look,” said Philipp Heck, a co-author of the report and associate professor at the University of Chicago who is also curator of the meteorite, rock and mineral collection at the Field Museum of Natural History in Chicago.

Now Heck and colleagues have released an in-depth report examining three of the meteorite pieces housed at the Field museum.

The results reveal that the space rock is of a type known as an H4 chondrite – a relatively rare subtype of a class of meteorites common in collections.

Heck added that initial analysis of the space rock revealed that the meteorite contained 2,600 different organic compounds. While an even greater array have been found in other meteorites, Heck said the findings add weight to the much-mooted idea that meteorites might have played a role in kickstarting life on Earth.

“I personally found it stunning how many organic compounds were still in this meteorite despite its thermal metamorphism,” said Heck.

But there were other insights.

“We found [this meteorite] was ejected 12m years ago from its parent asteroid” said Heck, noting this is the first evidence of that particular event.

And analysis of levels of argon in the meteorite, produced by radioactive decay, shed light on the history of asteroid itself, with Heck noting the element is released when impacts occur. “We found nothing else happened since the [parent asteroid] formed 4.5bn years ago,” said Heck. “It was pretty much dull on that asteroid.”

Heck said that as the Hamburg meteorite fell on to frozen ice, it was relatively uncontaminated. But to have a really pristine sample it is necessary to recover space rocks directly from asteroids: an endeavour a number of space missions have set out to do, including the Nasa spacecraft Osiris-Rex that is set to return to Earth in 2023.

Dr Katharine Joy, an expert on meteorites and lunar science at the University of Manchester, who was not involved in the report, said space rocks like the Hamburg meteorite are exciting as they are fresh extraterrestrial samples.

“By looking at the minerals and age and chemistry of [meteorites] we can look back in time to understand how its parent asteroid body relates to other asteroids and small bodies we know formed at the same time within the first few million years after the sun formed,” she said.

Joy added that the UK Fireball Network is currently watching the skies for meteors, and encouraged readers to report sightings themselves to the network.

“It will be an exciting day when we get the right type of fireball and can go out, track down the fallen stone and analyse it to work out where it came from,” she said. “It would be completely amazing if it was from a completely unique type of asteroid or a piece of a large body like the moon or Mars.” 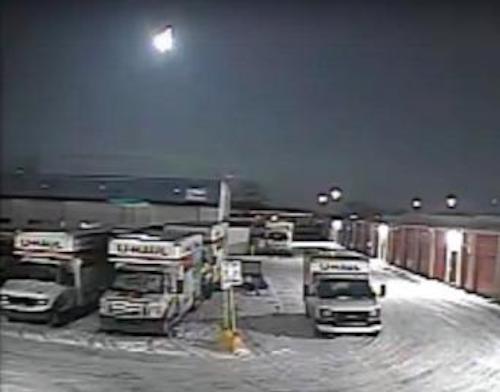 Security camera footage of the fireball in the sky over Toledo, Ohio. Video footage can be found at https://www.amsmeteors.org/videos/?video_id=999 and can be shared with credit.

On the night of January 16, 2018, a fireball meteor streaked across the sky over the Midwest and Ontario before landing on a frozen lake in Michigan. Scientists used weather radar to find where the pieces landed and meteorite hunters were able to collect the meteorite quickly, before its chemical makeup got changed by exposure to liquid water. And, as a new paper in Meteoritics & Planetary Science shows, that gave scientists a glimpse of what space rocks are like when they're still in outer space--including a look at pristine organic compounds that could tell us about the origins of life.

"This meteorite is special because it fell onto a frozen lake and was recovered quickly. It was very pristine. We could see the minerals weren't much altered and later found that it contained a rich inventory of extraterrestrial organic compounds," says Philipp Heck, a curator at the Field Museum, associate professor at the University of Chicago, and lead author of the new paper. "These kinds of organic compounds were likely delivered to the early Earth by meteorites and might have contributed to the ingredients of life."

Meteorites, simply put, are space rocks that have fallen to Earth. When things like asteroids collide in outer space, fragments can break off. These pieces of rock, called meteoroids, continue floating through space, and sometimes, their new paths collide with moons or planets. When a meteoroid breaks through the Earth's atmosphere and we can see it as a fireball or shooting star, it's called a meteor. If pieces of that meteor survive the trip through the atmosphere, the bits that actually land on Earth are called meteorites.

When the fireball arrived in Michigan, scientists used NASA's weather radar to track where the pieces went. "Weather radar is meant to detect hail and rain," explains Heck. "These pieces of meteorite fell into that size range, and so weather radar helped show the position and velocity of the meteorite. That meant that we were able to find it very quickly."

Less than two days after it landed, meteorite hunter Robert Ward found the first piece of the meteorite on the frozen surface of Strawberry Lake, near Hamburg, Michigan. Ward worked with Terry Boudreaux to donate the meteorite to the Field Museum, where Heck and Jennika Greer, a graduate student at the Field and the University of Chicago and one of the paper's authors, began to study it.

"When the meteorite arrived at the Field, I spent the entire weekend analyzing it, because I was so excited to find out what kind of meteorite it was and what was in it," says Greer. "With every meteorite that falls, there's a chance that there's something completely new and totally unexpected."

The researchers quickly determined that the meteorite was an H4 chondrite--only 4% of all meteorites falling to Earth these days are of this type. But the real thing that makes the Hamburg meteorite exceptional is because of how quickly it was collected and how well-analyzed it is.

"This meteorite shows a high diversity of organics, in that if somebody was interested in studying organics, this is not normally the type of meteorite that they would ask to look at," says Greer. "But because there was so much excitement surrounding it, everybody wanted to apply their own technique to it, so we have an unusually comprehensive set of data for a single meteorite."

Scientists aren't sure how the organic (carbon-containing) compounds responsible for life on Earth got here; one theory is that they hitched their way here on meteorites. That doesn't mean that the meteorites themselves contain extraterrestrial life; rather, some of the organic compounds that help make up life might have first formed in an asteroid that later fell to Earth. (In short, sorry, we didn't find any aliens.)

"Scientists who study meteorites and space sometimes get asked, do you ever see signs of life? And I always answer, yes, every meteorite is full of life, but terrestrial, Earth life," says Heck. "As soon as the thing lands, it gets covered with microbes and life from Earth. We have meteorites with lichens growing on them. So the fact that this meteorite was collected so quickly after it fell, and that it landed on ice rather than in the dirt, helped keep it cleaner."

The buzz around the meteorite when it landed also helped scientists learn much more about it than many other meteorites of its kind--they used a wide variety of analytical techniques and studied samples from different parts of the meteorite to get a more complete picture of the minerals it contains. "You learn a lot more about a meteorite when you sample different pieces. It's like if you had a supreme pizza, if you only looked at one little section, you might think it was just pepperoni, but there might be mushrooms or peppers somewhere else," says Greer.

"This study is a demonstration of how we can work with specialists around the world to get most out of the small piece of raw, precious piece of rock," says Heck. "When a new meteorite falls onto a frozen lake, maybe even sometime this winter, we'll be ready. And that next fall might be something we have never seen before."