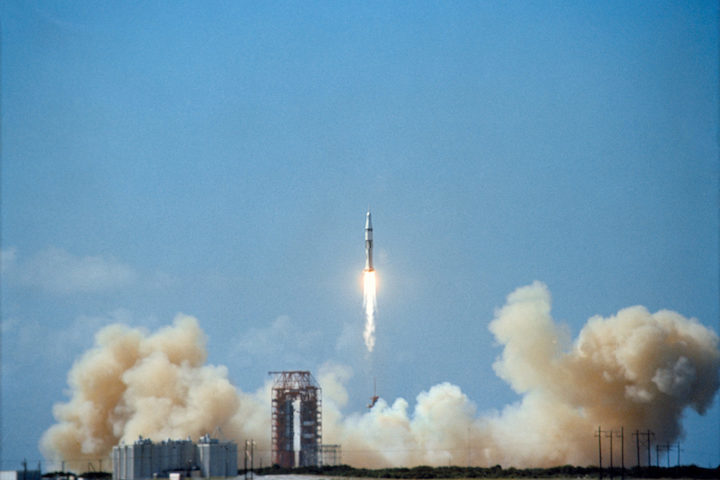 More than five decades ago, today, on 11 October 1968, a giant rocket—nicknamed “the big maumoo” by Apollo 7 Commander Wally Schirra—took flight from Pad 34 at Cape Kennedy in Florida and launched the first stepping-stone in America’s bid to land a man on the Moon before the end of the 1960s.

Powered uphill by eight H-1 engines on its S-IB first stage and a single J-2 engine on its S-IVB second stage, the Saturn IB rocket and Apollo 7 finally laid to rest the ghosts of astronauts Virgil “Gus” Grissom, Ed White and Roger Chaffee, tragically killed in a launch pad fire almost two years before. With the successful completion of the Earth-orbiting voyage of Apollo 7 in October 1968, NASA was more confident than ever that it could fly men to the Moon and land on its dusty surface.

Commanding Apollo 7, Schirra was one of the “Original Seven” Mercury astronauts and became the first human to log a third voyage into space. He wanted to dub his spacecraft “The Phoenix” in honor of the mythical firebird which was said to end its 500-year lifetime on a funeral pyre, then return from the ashes. It was meant as a respectful tip of the hat to Grissom, White and Chaffee, but NASA feared unpleasant reminders of the Apollo 1 fire and vetoed the idea. Joining Schirra for the mission were a pair of “rookie” astronauts: Donn Eisele as the senior pilot and Walt Cunningham as pilot.

Apollo 7 was “open-ended” in length to 11 days, in order to acquire additional data and evaluate long-duration spaceflight capabilities. The astronauts awoke early on 11 October 1968, spoke to loved ones over the telephone, showered and submitted to the doctors for one final examination. Ever the joker, Schirra could not resist one final “gotcha”.

Part of the pre-flight physical was a check for lesions in the upper motor nervous system. “If the toes turn up, it is an indication of nerve damage,” wrote Cunningham in his memoir, The All-American Boys. “Wally had practiced the proper response to gain one of his famous gotchas on the doctors. When Wally’s toes turned up on launch day, the doctors figured he was ready for a hospital bed, not a launch pad. Wally waited until they were huddling in whispers before he broke out laughing. There was no business so serious or so important that Wally could resist the temptation of a gotcha.”

The astronauts breakfasted with NASA Administrator Jim Webb and a half-dozen others, before heading to the suit-up room on the third floor of the Operations & Checkout Building. Walking out into the cheering, waving crowds, then taking the transfer van out to Pad 34 and boarding Apollo 7, they felt that the entire nation was pulling for them.

The countdown proceeded normally, with the exception of Cunningham’s suit ventilator losing pressure; fortuitously, there was a spare in Pad 34’s white room and it was quickly replaced. Waiting to board Apollo 7, he had chance to stand on the pad’s swing-arm, 220 feet (67 meters) above ground level, and look down on the enormous Saturn IB. “It was quite windy now,” Cunningham wrote. “Beneath us, we could feel the vehicle and swing-arm sway.”

In fact, wind conditions were the only major obstacle standing in Apollo 7’s way on 11 October 1968. A few other minor glitches did rear their heads, however. The high-speed elevator, which was meant to be stationed at the level of the spacecraft, got stuck at ground level. Then, just ten minutes before the targeted liftoff time, a slower-than-normal thrust-chamber jacket chilldown of the S-IVB added a couple minutes of delay. Nerves were tight and no one, from the astronauts to the launch control team, wanted to scrub now. “The delay disturbed us,” wrote Cunningham, “out of all proportion to the time lost.”

Passing three minutes in the countdown, the autosequencer took over all critical functions and at 11:02 a.m. EDT, watched by hundreds of accredited journalists at the Cape and an estimated half-million spectators crowded along the Florida roadways and beaches, Apollo 7 took flight. Aboard the CM, there was initially no way of sensing the instant of liftoff, apart for the ticking of the spacecraft’s timer.

But as 1.6 million pounds (725,000 kg) of “deep-throated” propulsive yield from the eight H-1 engines punched them in the back, there was soon no doubt in the minds of Schirra, Eisele or Cunningham that they were on the move. There was little to do in the first few moments, wrote Schirra in his memoir, Schirra’s Space, apart from monitoring the dials and listening to Mission Control.

But only Eisele had a clear view of the commotion outside. “We had a boost protective cover over the command module,” Cunningham later told a NASA oral historian. “There’s an escape rocket that you can use any time until you get rid of it and that’s a little after a minute into the flight. Because that rocket puts out a plume, you had to have a cover over the command module so that you wouldn’t coat the windows and you wouldn’t be able to see anything out of the windows in the event you were coming down on a parachute during an abort. So the only place you can see “out” is over Donn’s head in the center seat. There’s a little round window, about six inches across, and he was the only one that could see out. We had no windows until the boost protective cover [was jettisoned].”

As the S-IB powered through the low atmosphere, the gravitational stresses on the three men grew inexorably higher, eventually reaching 4.5 G when the time came for staging. Two and a half minutes into the thunderous ascent, the eight H-1 engines burned out and the S-IB was discarded. This set the stage for the singular J-2 engine of the S-IVB—with a total thrust of 200,000 pounds (90,700 kg)—to pick up the thrust and deliver Apollo 7 to low-Earth orbit.

“We were abruptly thrown forward into the straps of our restraint harnesses,” it was noted in Eisele’s memoir Apollo Pilot, edited by Francis French. “We went weightless for a moment and it was all quiet. Then, bang! A noise like a cannon-shot and lights on the control panel told us the first stage had separated and was falling away back toward Earth.”

Although the S-IB was fueled with liquid oxygen and a highly refined form of rocket-grade kerosene (known as “RP-1”), the S-IVB ran on liquid oxygen and hydrogen. As such, Schirra, Eisele and Cunningham became the first humans in history to ride a hydrogen-fueled rocket. “I was somewhat startled by the fireworks of staging, as the Chrysler S-IB first stage gave way to the Douglas S-IVB second stage,” Schirra later wrote. “It was like being in an erupting volcano, with sparks and fire and smoke and debris all over the place.” Still, in his air-to-ground communications, Schirra reported that the Saturn IB—on the first of five missions it would fly with humans aboard—was “riding like a dream”.

On the ground, however, the situation was not quite so dreamy. For a minute or so during ascent, the Manned Spacecraft Center (MSC) in Houston, Texas, suffered a power failure which temporarily knocked out lights, control consoles, screens and instruments. Fortunately, generator power promptly picked up the loads and no telemetered data was lost.

Ten and a half minutes after liftoff, Apollo 7 was inserted perfectly into orbit and the S-IVB duly shut down. Both stages of the rocket performed admirably and the astronauts’ first experience of spaceflight was manifested in the peculiar sensation of weightlessness. They removed their helmets, pulled out some stowage and took a look at the world outside the spacecraft’s window. “I looked down and there was the Sinai Peninsula, just as it had appeared in drawings of the recent Arab-Israeli war,” wrote Cunningham, “with the Suez Canal and the Red Sea on one side and the Gulf of Aqaba on the other. Here I was, looking at the globe as it really was.”

So began a complex mission which would run for just shy of 11 full days, making Apollo 7 the second-longest space voyage by the United States at that time. Over those days, Schirra, Eisele and Cunningham put the spacecraft definitively through its pace in orbit around the Home Planet. They practiced rendezvous with the S-IVB, exactly as future crews would do when picking up their Lunar Module (LM), and they successfully test-fired the large Service Propulsion System (SPS) engine at the base of their Service Module (SM). And they ran several televised events from the spacecraft, nicknamed the “Wally, Walt and Donn Shows”, for which they later won a special Emmy Award.