Researchers from the RIKEN Cluster for Pioneering Research have made observations of a new magnetar, called Swift J1818.0-1607, which challenges current knowledge about two types of extreme stars, known as magnetars and pulsars. The research, just published in The Astrophysical Journal, was done using the Neutron star Interior Composition Explorer (NICER), an X-ray instrument aboard the International Space Station. 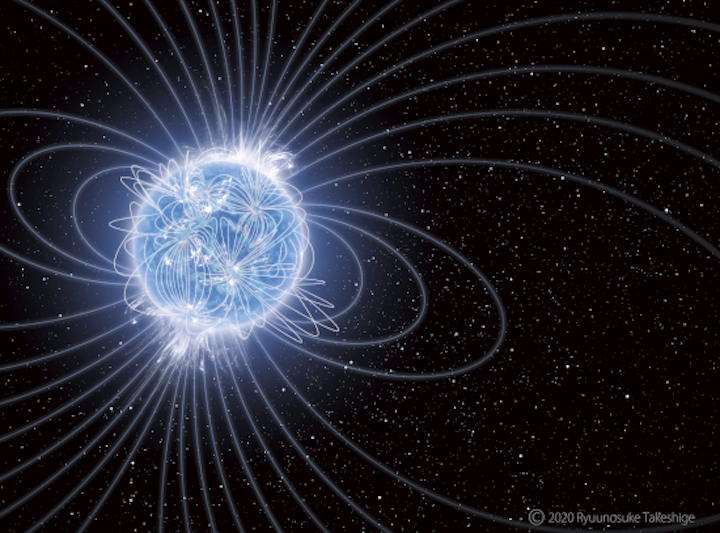 Magnetic lines of a magnetar. Image by Ryuunosuke Takeshige 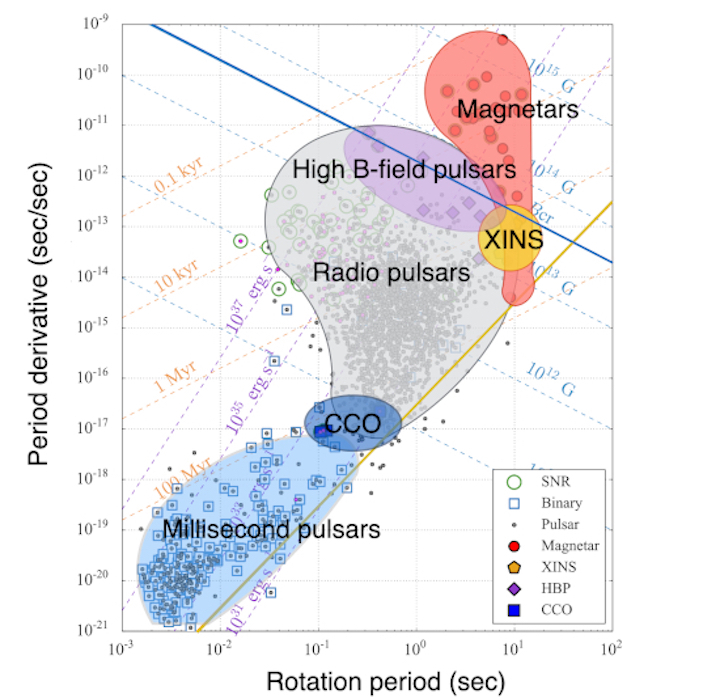 Magnetars are a subtype of pulsars, which are neutron stars—degenerate stars that failed to become black holes but instead became extremely dense bodies composed mostly of neutrons. Magnetars as well as some young rotation-powered pulsars—another type of pulsar—emit powerful X-ray beams, but the mechanism is believed to be different. With magnetars, the beams are believed to be powered by extremely strong magnetic fields, whereas in canonical pulsars they are powered by the rapid rotation of the star. However, there is much that is not well understood about these phenomena. Recently, several magnetars have been shown to emit radio waves—a property that was formerly thought to be limited to canonical rotation-powered pulsars—blurring the boundary between the two.

For the current study, work done by Chin-Ping Hu, a visiting researcher at the Extreme Natural Phenomena RIKEN Hakubi Research Team in the RIKEN Cluster for Pioneering Research and colleagues, has revealed a missing link between the two types of pulsar.

On March 12, a new gamma-ray burst was detected by the Burst Alert Telescope (BAT) aboard the Neil Gehrels Swift Observatory, a space-based gamma ray observatory. The object, believed to be a magnetar, was dubbed Swift J1818.0-1607. The RIKEN group and NICER team quickly moved into action. Four hours after the alert, they began making X-ray follow-up observations with NICER.

They found that the magnetar had a pulsation period of 1.36 seconds, the shortest among magnetars observed until now. Their observations showed that it was showing spin-down behavior—suggesting that the emissions were to some extent being powered by rotations—and that it had a magnetar-level surface magnetic field of 2.7×10 14 Gauss, indicating that it is a young magnetar, formed about 420 years earlier. Studies of “glitches”—sudden changes in the rotational frequency that are important of understanding neutron stars—as well as the noisy timing behavior of its stellar rotation showed that it is indeed young. However, its X-ray emission was found to be lower than that of other magnetars, indicating that the star has attributes of both magnetars and rotation powered pulsars.

According to Hu, “Our study has given us new understanding of the neutron stars with high magnetic fields. Recent radio observations suggest that magnetars may be a cause of mysterious phenomena called fast radio bursts, so we look forward to investigating further.”

According to Teruaki Enoto, team leader of the Extreme Natural Phenomena RIKEN Hakubi Research Team, “The discovery of a new magnetar is exactly what our magnetar and magnetosphere science team of NICER was waiting for. The NICER observatory is very well suited to monitoring X-ray pulsations from magnetars, and the bridge between the two types of pulsars that we discovered has contributed to our understanding of these mysterious objects.”

The work was done by scientists from RIKEN CPR in collaboration with colleagues from Kyoto University and a number of other institutes around the world.