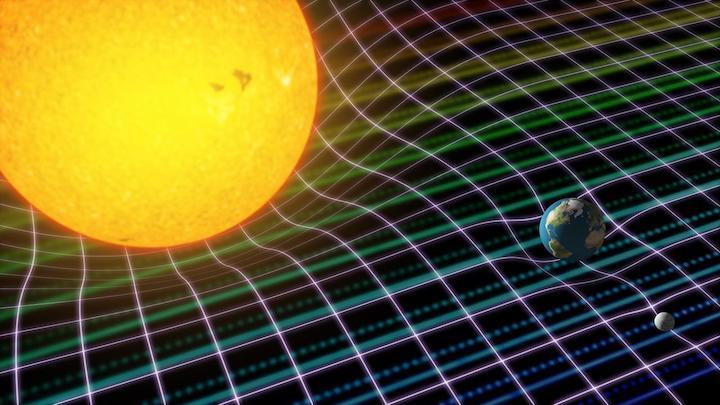 Artistic representation of the Sun, the Earth and the Moon with the space-time curvature of Einstein's General Relativity over the spectrum of sunlight reflected from the Moon (in colors from blue to red). Credit: Gabriel Pérez Díaz, SMM (IAC).

An international team of researchers led by the Instituto de Astrofísica de Canarias (IAC) has measured, with unprecedented accuracy, the gravitational redshift of the Sun, a change in frequency of the lines in the solar spectrum which is produced when the light escapes from the gravitational field of the Sun on its way to Earth. This work, which verifies one of the predictions of Einstein’s General Relativity, is to be published in the journal Astronomy & Astrophysics.

The General Theory of Relativity, published by Albert Einstein between 1911 and 1916, introduced a new concept of space and time, by showing that massive objects cause a distortion in space-time which is felt as gravity. In this way, Einstein’s theory predicts, for example, that light travels in curved paths near massive objects, and one consequence is the observation of the Einstein Cross, four different images of a distant galaxy which lies behind a nearer massive object, and whose light is distorted by it.

Other well known effects of General Relativity are the observed gradual change in Mercury’s orbit due to space-time curvature around the “massive” Sun, or the gravitational redshift, the displacement to the red of lines in the spectrum of the Sun due to its gravitational field.

The gravitational redshift is an important effect for satellite navigation systems such as GPS, which would not work if General Relativity was not put into the equations. This effect depends on the mass and the radius of an astronomical object, so that even though it is bigger for the Sun than for the Earth, it is still difficult to measure in the solar spectrum.

In 1920, Einstein wrote: “For the Sun, the theoretical redshift predicted is approximately two millionths of the wavelength. Whether this effect really exists is an open question, and astronomers are currently working hard to resolve it. For the Sun, its existence is difficult to judge because the effect is so small”.

To measure it, the scientists have used observations of the solar spectrum reflected from the Moon, obtained with the HARPS (High Accuracy Radial-velocity Planet Searcher) instrument using the new technology of the laser frequency comb.

“Combining the precision of the HARPS instrument with the laser frequency comb, we have been able to measure with high accuracy the position of the iron lines in the solar spectrum”, explains Jonay González Hernández, a Ramón y Cajal researcher at the IAC and first author of the article. “This has enabled us to verify one of the predictions of Einstein’s Theory of General Relativity, the gravitational redshift, to a precision of just a few metres per second”.

“New measurements with the laser frequency comb attached to the ESPRESSO spectrograph, on the 8.2 m VLT telescopes, would allow us to improve these measurements”, adds Rafael Rebolo, a researcher and the Director of the IAC and a coauthor of the article.

Other researchers at the IAC who have participated in this work are Alejandro Suárez Mascareño and Borja Toledo-Padrón, who used the LFC (Laser Frequency Comb) attached to the HARPS instrument on the 3.6m telescope of the European Southern Observatory (ESO), at the La Silla Observatory (Chile).