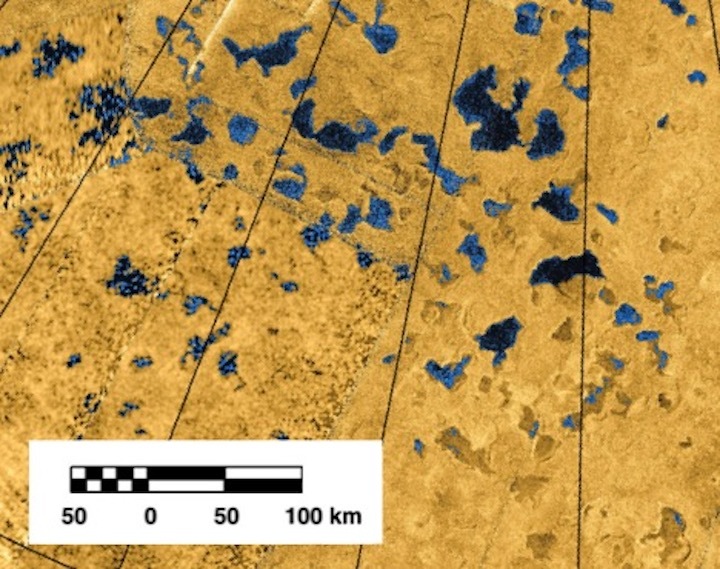 Lakes on Saturn’s moon Titan, composed of  methane, ethane, and nitrogen rather than water, experience density driven stratification, forming layers similar to lakes on Earth. However, whereas lakes on Earth stratify in response to temperature, Titan’s lakes stratify solely due to the strange chemical interactions between its surface liquids and atmosphere, says a paper by Planetary Science Institute Research Scientist Jordan Steckloff.

Stratification occurs when different parts of a lake have different densities, with the less dense layer floating atop the denser layer. On Earth, lakes in temperate climates often stratify into layers in the summer as the Sun heats the surface of the lake, causing this water to expand and become less dense, forming a layer of warm water that literally floats upon the cooler water below. This density-driven stratification can occur on Titan as well; however it happens due to the amount of atmospheric nitrogen that Titan’s surface liquids can dissolve, rather than the liquids warming up and expanding.

“Lakes on Titan, more than mere puddles of liquefied natural gas, are dynamic places that experience complex physical processes. They can stratify, overturn, and possibly erupt,” said Steckloff, lead author of “Stratification Dynamics of Titan’s Lakes via Methane Evaporation” that appears in The Planetary Science Journal.

Because liquid methane is less dense than liquid ethane, it has been long assumed that Titan’s methane would generally float atop its liquid ethane. However, when methane’s affinity for atmospheric nitrogen is accounted for, methane can dissolve sufficient nitrogen at low temperatures to become denser than ethane.

Steckloff and his research team realized that this behavior would inherently drive lake stratification at temperatures only a few degrees cooler than have been typically observed on Titan. “We focused on small, shallow lakes that fill following Titan’s rain events, and found that, if the temperature is low, the evaporation of methane from the surface can drive out dissolved nitrogen, which is heavy, resulting in an ethane-enriched (methane-nitrogen poor) layer floating on top of a methane-rich layer,” Steckloff said.

In spite of its frigid surface temperatures of around 90 Kelvin (-298 degrees Fahrenheit), Titan’s ability to host rain, rivers, and lakes naturally draws comparisons with our home planet. “Earth is the most Titan-like planet known. Like Titan, Earth has dynamic lakes. Similar processes are active on both, showing that the complicated behaviors of surface liquids can be controlled by a few simple rules and processes,” Steckloff said.

Steckloff’s work on this project was funded in part by a grant from NASA’s Cassini Data Analysis Program.